Developed by Thinking Rabbit and released in September 1988 for the NES, 8 Eyes is a 2D action platformer set in a post-apocalyptic (specifically, post-nuclear) future. Civilization is being rebuilt using mysterious jewels created by nuclear explosions that, in the wrong hands, could mean (further) destruction of the world, and it is up to our hero to save Earth from further war. 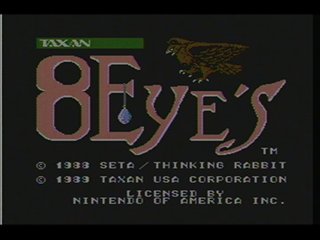 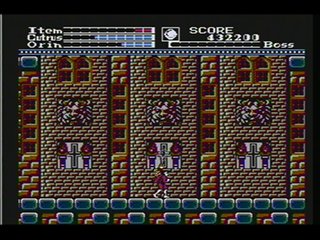 Ok this is my second run of 8 Eyes the first one was accepted but it took a long time so I decided to practice it more and came up with a better run this time beating my old run by close to 20 seconds.

Spain
I have played this level so much I think I could make through in my sleep but since this is 8 Eyes where controls don't work like they are suppose to this level broke many runs right at the start. Overall I have decided to run through a few more enemies then I did in my first run usually giving me less health against the boss but I do still play the level a little cautious all enemies who I do kill in this level and most of the game are killed for a reason. The boss goes rather well considering I had little health going into the battle I manage to beat him with one hit left.

Egypt
I grab the jar easily at the beginning and rush my way through most enemies to save time since I can grab health latter in the level which I do not taking to much time to do so. The boss is one of the hardest since he jumps all the time but I am able to land in some good hits and keep him close to me at all times.

Italy
I hit the door switch right away at the beginning and grab the jar from the far right to help me through the level by grabbing this I can run through enemies since I don't need to gather much item power. I don't use the knife this time and instead use the boomerang on the one switch which saves me a headache. Giovanni goes well as I now just bull rush him after grabbing the jar and do my best to avoid the panther who did get in my way during this fight but I still take the boss down pretty quickly.

India
By far the easiest level I have to kill a few more enemies then I would like but since the jar for health is a little out of reach and takes time to get to I skip it and enter the boss chamber with only a little health. I wish I could beat him before he even teleports once but I can never land enough hits. Not my best fight with him but it is pretty good.

Africa
The shortest level by far the only real difference is I go right for the Boss instead of waiting for him to come to me saving a few seconds.

Germany
I make the big jump at the beginning easily which allows me to skip a large part of the stage. I run through a lot of enemies so I don't have much health come boss time. This boss is still my worst since I have to wait for him to come to me I tried other methods of trying to have Cutrus hit the jar as the boss nears allowing me not to have to wait as long but doing so was rather shaky at best and he ended up doing a lot of damage to me and running away most of the time so I still find my original method the best for a speedrun.

Arabia
The hardest level to get through I run through a lot of the enemies gathering a little item power and by the time I get to the health near the end I am almost dead. The boss goes well with very little trouble

House of Ruth
The boss rush goes pretty well the Egypt boss jumps to the top platform costing me about 5 seconds which I wasn't to happy with but since I was having a good run I just continued. I still have to grab the health item against the Africa boss but this time he is closer to the left side of the screen making the journey to grab it less. Ruth goes down easily like always.

I place the jewels rather quickly with almost no mistakes finishing my run and beating my old one by a good amount.