Released in October, 1994, after over ten months of delays, Alien vs. Predator is the most famous game for the Atari Jaguar and epitomizes both the best and the worst of the system. In certainly the most imaginative video game based on the Dark Horse comic book series, the player takes control of the Colonial Marine, the Alien, or the Predator and attempts against seemingly impossible odds to achieve his or her objective, fending off the other two species simultaneously. Foreshadowing the wildly successful Aliens vs. Predator games for the PC, Alien vs. Predator is a fantastically fun history lesson. 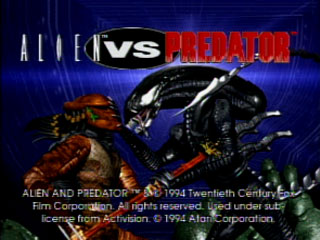 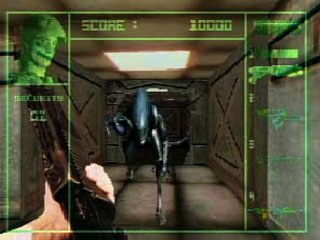 Single-segment as the Colonial Marine in 0:36:28 by Nathan Jahnke.

Upon inspection of Scott Bigham's maps, I discovered that only Security Cards 6 and 10 are required to complete the mission. I decided to pick up Security Card 1 and the Pulse Rifle, as well, due to not being able to find enough ammo for the Shotgun later on in the game, and due to potentially not being able to survive in the Alien Ship without the faster rate of fire of the Pulse Rifle. A route on which I would pick up Security Card 7 on Sublevel 1 after getting Security Card 6, then head back to Sublevel 4 and pick up the Flamethrower was abandoned when it became obvious that I could beat the game without the Flamethrower. The run was recorded over the course of a week or so. The two most difficult parts of the run were leaving the Brig (and not being so swamped by Aliens it would cost me an unreasonable amount of time) and dying in the Queen's chamber trying to pick up Security Card 10 (and leave alive). I challenge you to come up with a superior route. Special thanks go to out to Rachel Moore for calling out directions in airducts and in the Alien Ship, freeing me from having to memorize all that crap. Thanks a ton, love.

Single-segment as the Predator in 0:19:52 by Nathan Jahnke.

Veni, vidi, vici. Using the Combi Stick in the Alien Ship allowed me to gain the Shoulder Cannon by the time I made it to the Queen, drastically reducing the amount of time it took to kill her. Special thanks go to out to Rachel Moore for calling out directions in the Alien Ship, freeing me from having to memorize my way to the Queen.

The Alien in 0:06:34 by Nathan Jahnke, done in 7 segments and appended into one file.

Radix and I were talking and he pointed out that, because saving and reloading in AvP gives you a different enemy spawn set, it might be possible to achieve in a segmented run what I had dreamed of doing in my one-death single-segment run - going all the way to the Queen and freeing her without dying - provided that saving anywhere was allowed. Radix agreed that such a run could be submitted to the site, so I did one. It took me about four hours to put together. Here it is. Have fun.

Single-segment as The Alien in 0:08:48 by Nathan Jahnke. External audio commentary is available in a .mp3 file.

In my previous run as the Alien, I died twice, and that was a lot of lost time, especially with the first death (as I had to wait in the airduct for nearly the entire maturation process of my first cocoon). I mentioned that my time could be decimated if someone were to do a no deaths run, but I wasn't sure at the time if it was even possible given the apparently limited number of random spawn sets in the game.

This time I only die once, and even then I barely make it (check out my lifebar when the Queen breaks free). The discovery that you are forced to take damage from the forcefield generators pretty much doomed a no deaths run in my eyes, because the chances of getting to the Queen with any life left at all seemed remote enough, but getting to her with nearly half your life is just out of the question, in my opinion.

And yes, I do have the airducts memorized by now. :P