Released in October 2001, Aliens vs. Predator 2 was popular for allowing people to play a variety of Predator and Alien variants in multiplayer. The game takes place around 50 years after the events of Aliens and Alien 3. 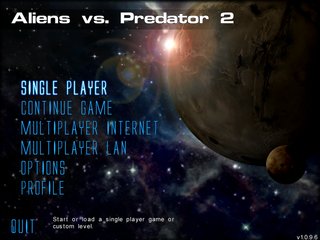 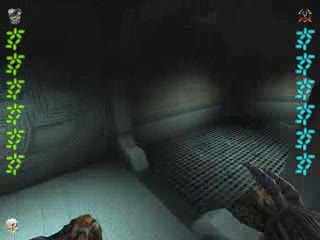 Firstly, I'd like to thank the SDA staff for accepting my second speedrun, and thus allowing it to get more views than it could've gotten anywhere else. It's a privilege.

Here's a run I've been wanting to do for quite some time. The decision to do the run on hardcore was the natural thing to do, I've always liked to make things as hard as possible. Still, the run came along a lot faster and easier than I expected, and I managed to beat the normal difficulty run by almost 4 minutes.

I'll give a few comments for each part:

One of two parts where this run is no different from a run on normal, since there are no enemies. Most of the improvement here comes from a much more efficient way to climb the wall near the end.

There's not much going on here, just some general optimization while running from point a to b.

Now thing get a bit more interesting. A lot of enemies to avoid/kill, and I think I've found the best way to deal with them all. I've never had my hp above 30 when exiting this level before, I guess I just got lucky this time. It doesn't matter though since I get my health refilled in the next part.

The longest part of this run, but it mostly a lot of running. I have to get lucky with enemy spawns here as well, since in some areas they are very random. If too many aliens spawn, I have to restart or slow down to kill them, which is of course unacceptable. Finished this part with only 04 hp left. :)

Now the hardest part of the run. It's a long and intense level, and I pretty much have to deal with all of the enemies in some way, or they will chase me down and kill me. The hardest part here was to come up with good strategies, It took me hundreds of playthroughs before I had everything working the way I wanted it. After that it was just a matter of doing it all in rapid succession, which is easier said than done. And of course, there are random spawns in this level as well. I managed to finish it though, and there's only one small hiccup that might've cost be half a second. I think that's acceptable.

One of the easier parts to run. Simply skipping the knife/pistol here is the best thing to do, since I automatically pick them up later anyway.

The only hard thing here is killing the predalien quickly. He has 4 different spawn points, and the one I got in this attempt is the best one. A few clean headshots and he's down, without having done any damage to me.

I pick up the flamer in this part, since it's pretty much the best weapon in single player. It kills all runner and drone aliens instantly, as well as humans. I lose about 3 seconds from picking it up, but it probably saves me almost a minute in the end.

Though one. I have to land pretty much every headshot perfectly (and there are many). The flamer helps a lot in the second half though. Without it this part would've been 15 seconds slower.

I found 2 quite nice tricks in this level. The first is hitting the switch inside the elevator before the doors finish opening, which prevents the doors from shutting again. By doing this I can get out of the elevator before your intended to. This is where the next trick comes in to play. At first I thought it was linked to the elevator bug, but it seems that by using the boxes to descend instead of the ladders, you can bypass some kind of trigger. It for some reason allows me to run to the "skylift" and exit the level without killing the corporates and the exosuit. I still have to pick up the armor/hud though, and since the rocket launcher is right hext to them, I take it as well. It saves me quite some time later on.

The rocket I use to take out the three aliens below the grate only works about 10% of the time. So yeah, out of 100 attempts, 90 of them end right there. It's the best way to do it though, no other weapon can kill them that fast. The dark corridor where you have to use the torch to remove 4 locks, is the most random area in the game, when it comes to spawns. The number of aliens that chase me down can vary from 2-4, and sometimes they wont come after me until I start torching the locks, and at that point I'm screwed, In this attempt I killed 3 aliens, and they all came to me right after each other, so it couldn't have been much better.

To conserve ammo/health, I take out the aliens in the crane room from behind a crate using the pistol, which works fairly well. You can't open the door before a the crane moves the crate in front of it, and there's no way to speed it up.

Only one thing to kill here, and it's a heavy predator. I found a very useful way to deal with him. For some reason, if you shoot him with flamer the moment he lands on the ground, and then hide behind a crate, he will come running (to engage in melee) but he'll get stuck a few feet from you. At this point all you have to do is unload on him. I might seem slow, but the shotgun is my weapon of choice here. I tested everything else I had, and nothing worked this well.

The door in the landing pad can actually be opened before the marines do it for you, if you press the button multiple times. Saves 5-6 seconds. Killing the second praetorian is always a slower process than killing the first. For some reason, it has either more hp, or a smaller hitbox, since I've never killed it as fast as the one in the building.

It's funny how you can walk up the loading ramp to the ship before it actually lowers. :)

Exosuit time. Ammo for this mission is basically unlimited, so I go ahead and try to put it to good use. The minigun is the weapon of choice when destroying the debris clogging the generators, because it can be fired continuosly while moving around the room. Rockets have a long cooldown and the laser weapon drains energy, so I'm positive this is the fastest way.

It's time to kill the queen. The minigun does the most damage, no question about it. It's as simple as shooting her head while running away from her and picking up ammo while she's calling for backup. The drone aliens can cause some trouble if they catch up, so I deal with them quickly. Being able to skip the praetorians at the very end was a big relief. I'm pretty sure I entered the drop ship as early as humanly possible.

So, that's it, it's finished. I hope you enjoyed watching it.

Note of importance: This old game is not 100% compatible with the hardware I was running it on, resulting in lots of rendering errors. If you notice graphical anomalies it is not the result of editing or cheating, that's how the game behaves on my computer.

I guess it was about time I improved this old thing, and I'm actually surprised no one else did this before. The old run was by no means bad, but for some unexplainable reason a lot of tricks refused to work. Well, now I have managed to get them to work and polished the playing even further, resulting in an even faster run. I also decided to make full use of the game's autosaves to prevent possible penalties for browsing the menu when saving. Using the autosaves also has another nice effect, some cut scenes aren't played at all, saving a couple of seconds here and there. There really isn't that much more to mention since most of the things used in the run have already been known for years at the time I'm writing this. But I'm going to bother you with it anyway, just for the record.

Predator in 0:23:47 by Richard Karlsson done in 7 segments appended to one file.

Special thanks to Kibumbi, Yautja Elder, Radix and mikwuyma. Also many thanks to all at the SDA forum for help and support.

This is actually the second version of the Predator run. My first was in 13 segments, while this one has 7. Thought no time improvements were made.

There wasnt really any plans for the run, it was all about going as fast as possible at each level, since there was also no major shortcuts or breaks. The biggest shortcut is while in the alien hive, a big room were you could jump rapidly at the slant to gain fast height.

Throughout i used a technique called speed-jumping(bunny hops), after a high jump you continue to make normal jumps each time you land. This makes you go the fastest in movement. It may not seem to make a difference, but i assure you, it does. I have found out that the speed varies depending on what type of ground it is. As running i tried to have a low amount of kills as possible to save time. Good for me it was pretty easy out-running them.