Released in 2001, Ace Combat 04: Shattered Skies follows the events in the war between Erusea and ISAF after a massive asteroid, Ulysses 1994 XF-04, strikes the continent of Usea. You play as the pilot Mobius 1, in a struggle to single-handedly put an end to the war and defeat both Erusea and the Yellow Squadron. 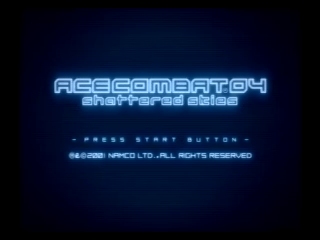 Played on Very Easy (For the exception of battleships, all targets are destroyed by a single missile)
Single-Segment

Many of the strategies I used are taken from Raelcun’s run from two years ago, with a few optimizations in several missions to finish them faster.

Mission One: Sitting Duck
This took quite some time to get the correct path down in order to maintain a high airspeed and hit each of the Bear bombers in one pass. The crux of the route was the fourth bomber, since I had to have the F-4 on a path slightly ahead of the bomber in order for the missile to hit. Unfortunately, this is not very consistent, so reduce airspeed to around 500 knots on the fourth bomber (0:55.23).

Mission Two: Imminent Threat
A pretty straightforward mission to destroy all of the parked bombers at the airbase. I took a little longer to line up the third cluster of bombers than I wanted (1:13.38).

Mission Four: Blockade
The three transport targets are within a jamming field, which makes it harder to find their position on the radar. Luckily, taking out the E-767s is not necessary, and the position of the three transports is the same for each playthrough (0:54.90).

Mission Five: Lifeline
This is the first mission where you are required to score a certain amount of points in a specific time frame before a mission update. When the timer reaches zero in the first phase, the return line is moved further south, so it is possible to be closer to the new return line after the cutscene, and finish the mission faster (10:39.26).

Mission Six: Invincible Fleet
Similar to Lifeline, for the exception that the mission ends once the timer expires. The route for completing this mission does not make a difference, since there is enough time to destroy all the major targets and rearm. I mostly use the extra time for dogfighting fighters that are leftover (15:00.00).

*Before I begin the next mission, I purchase the F-14A due to its’ speed and XLAAs*

Mission Seven: Deep Strike
Instead of hitting the radar target then the two targets in the back, I go for the two rear targets first, then the radar. This allows me get through a majority of the ravine and navigate over the switchbacks without having to slow down when the Stonehenge attacks start. Using this strategy, Stonehenge only shoots one volley (2:43.76).

Mission Eight: Shattered Skies
This is purely an air battle over the launch site with Yellow Squadron mixed in with the rest of the enemy aircraft. After the first timer expires, bombers show up for the mission update, and I spend the remaining time shooting down any remaining aircraft (13:00.00).

Mission Nine: Operation Bunker Shot
Similar to Lifeline, a certain number of points have to be acquired before time runs out, then A-10s will spawn northwest of the central beach. Before time expires, I position myself behind the spawn point of the A-10s, so they don’t have time to separate much before I fire the XLAAs.This time around, I was a little ahead of the A-10s, so it was a little slower (10:28.48).

*Before beginning the next mission, I buy the Typhoon due to it having better acceleration and maneuverability*

Mission Eleven: Escort
Enemy fighters will go after the passenger jet at 26,000 feet first, then go after the one at 6,000 feet for a total of five waves. This went a little slower than what I wanted (2:50.80).

Mission Twelve: Stonehenge Offensive
I skip the turret directly to my front, since hitting it in the barrel head-on is not reliable. The mission update went pretty well (1:58.73).

Mission Thirteen: Safe Return
It’s not too difficult to get a S rank before the start of the mission update, but the jammers can be annoying to spot. The dogfight with the four fighters was not great (8:10.65).

Mission Fourteen: Breaking Arrows
The first wave of missiles went well, and I was able to get the second wave down without too much trouble. The last missile is pretty easy to get, if you shoot it when it is traveling on its’ downward curve (1:56.61).

Mission Fifteen: Emancipation
Pretty straightforward with clearing out the three areas of targets for the first part of the mission, but the update can cause a large time loss if the TU-160s are not taken out as they enter the combat area. Luckily, I was able to shoot them down before they accelerated out of range of the XLAAs (11:23.63).

Mission Sixteen: Whiskey Corridor
Same as Tango Line, except I don’t have to worry about crashing into mountains, and Stonehenge is not a factor anymore (20:00.00).

*Before starting the next mission, I purchase the SU-37 based on top speed, and the excellent QAAMs that come as its’ standard SP weapon*

Mission Seventeen: Siege of Farbanti
I mainly use this stage to get acclimated with the SU-37, since it is very twitchy. The QAAMs make the Yellow Squadron fight a breeze in the mission update. Unfortunately, this run featured the QAAMs performing a rare miss on two of the Yellows (13:41.95).

Mission Eighteen: Megalith
It would not be a Ace Combat game without flying in an enclosed facility or structure. The missile shot on the third generator was a little sketchy, but it worked out (2:36.13).

Special thanks go out to the gentlemen of the former 404th, who renewed my interest in the PS2 Ace Combat trilogy, and for the lively discussions about the series as a whole.