ActRaiser 2 is a difficult platformer developed by Quintet and published by Enix for the SNES in 1993. This prequel to ActRaiser finds The Master (God) commencing his fight against Tanzra (Satan). The simulation segments from the first game are not present in this one. To make up for this, The Master has grown wings and can now glide and smite foes in midair. 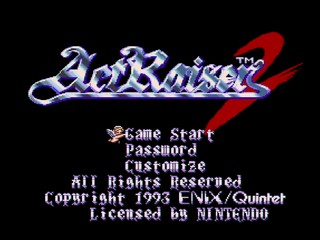 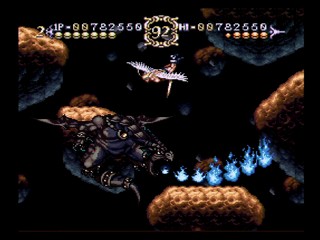 Actraiser 2.  This game and I have had an ongoing love-hate relationship for years, and it only shifted away from the 'hate' end a few years ago.  When I first bought this game, I, like many others, was tricked by the Actraiser title and assumed it would be just as amazing as the first game.  After getting demolished for a few hours, I put the game away.  Every few months I would return, assuming that I magically got better at it, but that was never the case.  Up until when I started working on this speed run, I had only ever beaten 5 of the 14 levels on this game (Industen, Benefic, Modero, Tortoise Isle, and Altheria) on normal difficulty, with passwords and continues and anything else I could use.  It was a very challenging process to get good enough to do a run on hard difficulty, but I was determined.  This has now become my favorite video game of all time.

I started learning this game on February 1, 2010.  The run you see here was completed six years later.  The game has been undergoing continuous rerouting as I improved and learned more about the game over those six years.  The current route and current run are far above and beyond what I ever thought was even remotely possible, and I'm still not done. I'd like to cut 30 more seconds off of this run before I am done for good with hard mode.

On hard difficulty, enemies have more health, requiring multiple hits to kill than the lower difficulties.  Master only gets 2 lives and 3 magic uses per level, and magic takes longer to charge up.  All the minibosses have 20 health instead of 10 or 16, and the enemies do more damage to Master.  In summary, this means it is extremely difficult to survive in general, but for a speed run it also means that boss strategies are incredibly tricky.  Since my magic takes almost 3.5 full seconds to charge up, it is unacceptible in most battles to use it more than once.  Trying to find the optimal kills on the bosses has been an ongoing challenge for the entire time I've been running this, but it is immensely satisfying.


I should discuss a few of the game mechanics, since it might be slightly confusing otherwise.  Hopefully it clears up any suspicions of cheating, too.

I want to be gliding whenever possible.  Master moves significantly faster while gliding than he does while walking.  Diving is slower than gliding.  I can cancel a glide by either pushing jump again to fall straight down, diving, or by hitting the ground and sliding.  The slide is pretty fast, but otherwise it is horrible.  You can't cancel it early, so you are just vulnerable if you forgot to cancel your glide with B or a dive.  However, if you slide into a solid boundary, like a wall or a snail shell, the slide instantly cancels and you regain control immediately.  This is an extremely situational trick, but it does have its uses.

Master can attack with a crouching swing, standing swing, up-angled swing, aerial swing, swordplant, dive attack, and glide attack.  All normal swings do 1 damage, swordplant and glide attack do 2 damage, and dive attacks do 3 damage.  Master also has a shield that will block projectiles if Master is stationary.  While moving, the shield cannot block.  Any of Master's grounded attacks can be canceled by jumping, so it is usually easier to set up a stunlock by canceling a standing swing into a swordplant chain.

Almost every platform and ledge in this entire game has an invisible platform immediately below it.  You can't stand on these for long (once Master shows his standing sprite, he falls), but you can use them to jump off of.  The best use of these is to land on the invisible platform with some input that allows a buffered jump (swordplant or double jump cancel work best), and then buffer a jump to instantly jump off of it.  This technique allows us to climb much much faster than the game's mechanics generally allow.  Demon's Cave second screen is a good example.


Understanding the magic system is really critical, too.  You begin charging magic by holding the attack button. It is worth noting that even though there are two attack buttons, you cannot charge magic and attack with the other button. After magic is fully charged, Master will be rapidly blinking red and the timer will be replaced with an icon that indicates which magic will be used. This is based on Master's current stance. There are 7 different magic spells you can use based on what you are currently doing:

I mostly use the Raging Bomb and Phoenix simply because they do the most damage. Aura Shoot is very good in certain situations, mostly for refreshing the slide in narrow areas. The others are not great for an optimal speed run because they lock you in place for too long.

I want to do these before my individual level notes, because it is very important to me for this run in particular.  A good friend of mine and Actraiser 2 expert, mondrunner, was kind enough to help me plan boss strategies for nearly every level in this game, including the Gargoyle miniboss who appears a total of 4 times.  Back in 2010, he was unable to submit a run to SDA of this game, so he trained me instead so I could do it.  I am extremely grateful for all of his advice and strategies.  I used nearly all of them in my final plan, and the Gargoyle combos in particular were of critical importance.

I also need to thank Queen Spider for offering alternate routes through the first screen of Death Field and the beginning of the first screen of Stormrook, back when I first started.  While the route has improved since then, his routes served as a really good foundation for many years.

Pasky made a hitbox viewer for this game a few years ago, which really helped me to visualize some of the issues I was having at the time.  He also worked on the first TAS of this game, which gave me a lot of ideas for further route improvements.

Lastly, I need to give a HUGE thank you to Fred/Frasterize who made the most recent TAS of this game and found LOADS of new strategies that I had not thought of.  Faster routes through Palace 2, better boss strat on Greed, some new maneuvers in Death Field and Benefic, etc.  The list goes on.  At this point, any minor improvement is worth using and he found loads of them.


Now, at this point I would ordinarily do extremely detailed level-by-level analysis, but I am honestly not up for it this time.  I could write a full-length book about every manipulation in every stage, everything that went right, and everything that wrong.  Nobody is interested in that and it is unnecessary.  The short form is that this run is outstanding, but has a rough stretch in the middle.  Stormrook, Palace 1, and Palace 2 all lost a substantial amount of time (around 25 seconds between all of them), but everything else is nearly perfect.  I absolutely intend to return to this run, but I am extremely happy with this for now.  It is the first deathless speed run I have done since 2010, and there are very few mistakes.  If you want to hear more, I recommend listening to the audio commentary.

When I first started running this game, Wsplit did not exist, nor did attempt counters.  In order to feel like I accomplished *something* after a day of failed runs, I started a notebook in which I logged every failed attempt.  On my 2965th timed attempt, I produced this run.  Now, for this game in particular, I only do recorded/timed attempts when I am absolutely sure I can hit every trick in the run.  The attempt counter is rather low for that reason.  Since 2010, I have easily clocked 10k hours in this game.  Anyways, I present to you the total number of failed runs on each stage of the game, and each stage's clear rate:

Death Heim has the smallest chance of being cleared, which is brutal for a run of this length and difficulty.  Stormrook and Benefic have the lowest success rate out of the any of the other stages, with Palace 1 shortly behind (Industen is omitted because that number is inflated; I can be much more picky about the first stage than I can for later level).  These numbers are not *entirely* accurate because the world map failures might occur at any point, but they almost all happen before Industen or on the way to Benefic.  After Benefic, the numbers should be nearly perfect.

I truly hope you all enjoy this run!  I have spent over 6 years working on this and I am still not done.  Expect an improvement to this in the future, as well as a run on easy mode!