Addams Family for the NES was released in 1991 and developed by Ocean. The game is generally seen as a timeless reference for what not to do when making a video game... The story is based on the film with the same name. As Gomez you need to free six kidnapped family members and to find items with a total value of at least 1 million dollars in order to access the last room and confront the family's evil lawyer, Tully Alford. However intriguing this sounds, it was overshadowed by somewhat clunky controls and a hit detection that is more than able to make a grown man cry. Add an insufficient energy meter and you get the explosive combination of a game that most gamers, with no hesitation on the voice, would say is both genuinely bad and viciously challenging. 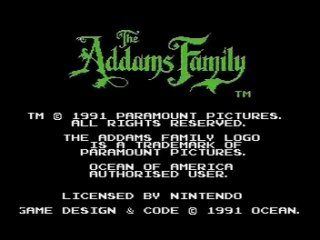 If you want to discuss or share information related to speedrunning this game (tricks, strategies, ...), use this thread:
https://forum.speeddemosarchive.com/post/addams_family_nes.html
If you have questions or comments about the run, use the existing verification thread:
https://forum.speeddemosarchive.com/post/the_addams_family_nes__august_9th_2009.html

Game description
If you're not familiar with this game, here is a small description for you to catch up. You play as Gomez and your objective is to save six family members who have been captured by the family's attorney. They are scattered around the Addams mansion. You can get to some of them directly (Thing, Granny, Wednesday and Lurch), while there are requirements for rescuing the others. Pugsley is stuck in a hole in the house (you see his legs sticking out on the left side of the house) and needs a shrinking potion to get out. The shrinking potion is composed of three ingredients (bone, blue egg and fog). You need to go a bit out of the way to collect all of them. The last family member, Morticia, can only be reached after having rescued the other family members and having collected at least 1 million dollars. The money requirement is another reason to get out of the way in this game. The game has a reputation of being difficult because of poor hit detection and unlinear gameplay. While the first is very much true (and even taken advantage of in this run), the manual is actually one of the more well-written ones imo and gives useful hints about everything needed to complete the game.

Section comments
Start - Entering the wood - Not much to comment on except that I missed tricking the spider to go left just before entering the ball room.
Wood - Pond - Wood - The wood is tricky to run in an optimized manner (both ways) in a no-death run. Time is obviously lost in sketchy turning and so on, but I won't even try to estimate how much. The run's biggest mistake comes in the pond. I messed up the swim rhythm and had to wait for the first jellyfish one extra cycle (2,5 seconds lost). If you haven't played this game, it needs to be said that the swim physics in this game are extremely awkward. Spam the swim button and you'll sink like a stone. Only getting the correct rhythm works.
Attic - The hardest section and also the one requiring the most luck. Triggering the bats is random as far as I can tell. This time I got lucky by both triggering the bat at 13.31 and at 14.05. They are both pretty much required for a run of the attic to look nice. I also managed to nail all the three jumps where money bags are collected from the platform above (one of trickier stunts execution wise in the game).
Chimney - Treasury - Got unlucky and bounced off the second bat in the chimney. After the completion of this run, I found out that it's possible to grab one more money in the chimney (luck-based though), which could have saved a few seconds by skipping one that's more out of the way. The only other thing I would like to comment on is that I messed up entering the door to the library. It cost a second and looked pretty ugly.
Treasury-End - There is a faster way to clear the last room, which is seen in the death abuse run. However, it requires taking damage and I'm not sure it would have been possible to come here with much more health without starting to lose time from too conservative playing.

Final thoughts
From what I can see, the obvious execution mistakes and/or bad luck in this run cost maybe 7-8 seconds. In theory, more time was lost due to for example unoptimized turning, waiting for falling objects, not entering doors at the earliest possible frame and it's also possible to squeeze more time out of the pond level. The unintentional hits represent a fair amount of the energy lost during the run. By optmizing this, more damage could have been taken elsewhere to save time. Personally, I don't feel tempted to go for a riskier strategy though, because some margin is needed in order to offset the more than cheap hit detection and the random areas of the game. More than one decent run has ended because running out of energy, without necessarily having made any big mistakes.
After this run was made, the flying glitch was discovered. I haven't calculated exactly how much time this and other discoveries made while making the death abuse run would save, but my rough guess would be 20-30 seconds. I have no intention of going back to improve the no-death category though.

Credits
- SDA for publishing this run and for providing the community with a non-commercial platform for hosting speedrun videos.
- Anyone who has contributed to the development of Anri-chan. If a tool is so easy that even I can encode videos, then it must good!
- The TAS gave me a flying start when starting to route this game, so I guess I should thank the author (Ventuz).

If you want to discuss or share information related to speedrunning this game (tricks, strategies, ...), use this thread:
https://forum.speeddemosarchive.com/post/addams_family_nes.html
If you have questions or comments about the run, use the existing verification thread:
http://forum.speeddemosarchive.com/post/the_addams_family__june_1st_2011.html

Background
Almost on the day 2 years after I recorded the previous run, I managed to get this improvement. During these two years, a lot of water has run under the bridge (as they say). A couple of months after the first run got recorded, I realized some flaws in the money management. By collecting more small value items, you could replace one money bag (10k). I also experimented in the chimney and noticed that you could pick up one more money bag by relying on luck for the spawning location of the first bat. Even though the time gain would be only around 10 seconds, I already at that point knew that an improvement would have to come one day. Some time after that, I got contacted by a youtuber having seen my speedruns. He had found some hidden "glitch warps" in the game (mainly in the secret rooms and in one or two other areas as well). Things started to get interesting, but it wasn't until a couple of months ago when some activity began over at tasvideos that I decided it was time pick up the game again. Ventuz (the current TAS-author) had found a nice flying glitch with some potential both from a time and entertainment perspective and was working on a death abuse route. After a period of route and idea sharing (mostly Ventuz -> me), the recordings began and the result is what you see here.

Glitch explanations
Before going into the discussion about the run, there are two tricks that need to be explained.

Improvements over the old run
The new run is a 77 second improvement. For your convenience, I have broken this down into the different components (it's not 100% exact, but I think it gives an overview of the major changes)
- Skip two money bags in the blue room (9 seconds) - Compensated by picking up more small value items and picking up one more money bag in the chimney.
- "Flying glitch" (5.5 seconds) - Used in three places (left and right landing and once in the main hall).
- Gallery (0.5 seconds) - By more aggressive playing, I managed to trap the polar bear without having to stop the forward momentum.
- Umbrella manipulation (0.5 seconds) - I noticed that the umbrella only extends the very first time you jump (or drop) in a room. I therefore did a small jump at the start of the kitchen so the umbrella wouldn't extend on the way down to the freezer.
- Freezer+furnace (4 seconds) - Improved strategy in the freezer allowed less turning around and less waiting for the ice blocks to appear in the end. The downside was that I entered the furnace with less health and needed to wait a bit in the flame section.
- Tree (0.3 seconds) - A small tweak when passing the first bat.
- Gomez' room (2 seconds) - I bounced off the imposter instead of the evil attorney to reach the ledge with Morticia.
- Fester's room (0.5 seconds) - Faster route.
- Wednesday's room (0.5 seconds) - Faster route.
- Glitch warp in the secret room in the pond (55.5 seconds) - This improvement is mainly due to not having to double back all the way back through the pond. However, this also allowed death abusing in the left landing, which saved a few seconds.

Final thoughts
I have no intention of improving this run. I'm not aware of any possible route improvements except ones described above that I chose not to include for increased consistency.
For the sake of completion, I'd like to mention two peculiarities that could potentially be of use (, but are most likely not). Both are related to things mentioned in the manual.
The first mystery is about Fester's room. The manual says "There must be something worthwhile in here.". There is a money bag in the top left corner, but it seems redundant to talk so cryptically about something that is clearly visible. So the question is, does the manual refer to the money bag or something else, something hidden?
The second mystery concerns the music manuscripts. Two of them are used to open doors, but the third one does seemingly nothing. Still, the manual says the following "Each piece of music may help you, but you must figure out how!". So the question is, does the third music manuscript do something?
While the manual is actually very useful and overall fairly well written, one also has to keep in mind that many manuals from this era contained errors or maybe referred to things that were removed or changed right before the release.

Credits
- SDA for publishing this run and for providing the community with a non-commercial platform for hosting speedrun videos.
- Anyone who has contributed to the development of Anri-chan. If a tool is so easy that even I can encode videos, then it must good!
- When planning this run, I had lots of good back and forth discussion with Ventuz (the current TAS-author). Had it not been for Ventuz' discoveries, improving my old run would probably still have been on my to-do-list, but with very low priority.