Developed by Natsume in 1991, Advanced Dungeons & Dragons: Heroes of the Lance is a game based on a portion of the Dragonlance novel Dragons of Autumn Twilight. The book, written by Margaret Weis and Tracy Hickman, is generally regarded by fans of the series as one of the stronger entries to bear the Dragonlance name and serves as a great introduction to the world of Krynn and its colorful characters and locales. Then this game was made, focusing solely on a handful of chapters where eight heroes infiltrate the ruins of Xak Tsaroth to recover the Disks of Mishakal, which are being guarded by the great black dragon Krisanth, and it was a steaming pile of crap. No, I'm not bitter, why do you ask? 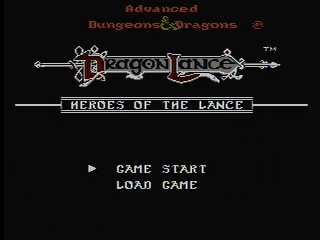 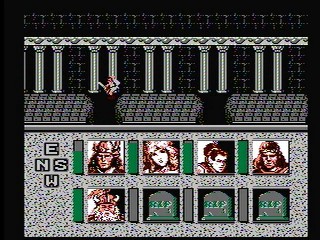 Background
I first speedran this game back in 2013. I had no previous history with the game and have to this date never played it casually to try and explore the rather big map. I first picked the game as an "easy" speedrun to try out a new recording setup on.

My first run (a 5:19) was therefore quite improvable and the route wasn't particularly well researched. A few years later, 'Vriaeliss' published a 5:17, containing an improved route in the second floor. With the possibility to "easily" save 5.5 seconds, I decided to pick up the game again. This time, I ended up with a 5:11. Overall, it was a much cleaner product than the 5:19.

Fast-forward to 2020. 'Arc' publishes a new TAS of the game, which included two major time-savers. The first was a different route in floor 1. In all fairness, a straight-forward route that should have been found way earlier. The second improvement was less obvious. The previous runs relied on casting "Protection From Evil" (PFE) to get through the dragons in floor 2 and 3. However, PFE runs on a timer, meaning it had to be repeatedly re-activated from the menu. What 'Arc' showed was that if Goldmoon is in front of the party, she can cast spells without having to enter the menu each time. The perfect spell for this purpose is "Hold person", which shoots a projectile that immobilizes the target allowing you to run through (assuming the projectile hits...).

Both of 'Arc's findings were easy to implement in real-time speedruns. And again, I decided to see if I could lower the time. Especially since sub-5 min initially looked like a possibility. However, after some more detailed routing and attempts to back it up, sub-5 seemed to still be out of reach, but not by much. I eventually managed a low 5:02, which was around what I had been hoping for. But there was something weird about that run... I briefly had Raistlin in front of the party. He walks at half the speed, but moves at the same speed as the others when jumping. So naturally I jumped while he was in front, which led me to accidentally overshoot one of the doors by a lot. That should logically have cost a lot of time and seemed incompatible with the time I got. When I analyzed what had happened, I realized I had come across a major time saver that would comfortably bring the time well below 5 minutes! By jumping to a door and holding up while in the air, you'll speed up the door transition correspondingly. Implemented everywhere, we were talking about 15-20 seconds to save!

It's a bit ironic that after having grinded out this game until I reached my goal time, the run that was supposed to be the final one ended up stumbling across a major trick that would have me start all over again... Getting a new run with the jump trick was just another fairly straight-forward grind, which resulted in the run you just watched (or maybe are about to watch).

Game Mechanics
This is mostly going to be a copy-paste from my previous run comments. Since those aren't easily accessible any longer, I feel it's worth repeating them here (with some minor updates). Note that not all of them are relevant for this speedrun.

Run comments
This run isn't really comparable to the previous runs due to the new techniques being used. Below is instead a fairly detailed room-by-room commentary. Probably too detailed for most readers, but hopefully useful for someone interested in speedrunning this game. There are several route options that have been considered. I won't go into detail on all of them. The SDA forum thread
contains more information of what has been considered and why the one used in this run was chosen despite faster routes being possible (at least in theory).

In summary, the first floor could have been 0.2s faster. The second floor maybe a second faster (most of it coming from Sturm and Raistlin dying at the same time and then to a lesser extent polishing the menuing a bit). A few tenths of a second are possible to squeeze out of floor 3 (maybe up to half a second?).

Final thoughts
The execution in this run is not complicated, so there really should only be a minimum of execution mistakes. Of all the time losses in this run, the only noticeable one I'd like to take responsibility for is the menuing in floor 2. A few tenths of a second could be saved there. The rest is mainly up to the RNG the game gives you. And there is lots of it. However, the variation isn't that big. Especially all completed floor 1 and 3 attempts should be very close to each other time-wise.
There is a bit more variation in floor 2 though. Roughly 2.5s based on the attempts I've had reaching floor 3. And this was my second best floor 2 split (0.2s behind the best). However, as mentioned above, perfect luck could probably push the time down by a second, but the odds of getting favorable outcome everywhere are slim.
Overall, I'm happy with this time. Getting a good floor 2 split takes a bit of grinding and then you still need a lot of things to go your way in floor 3 to finish out the run. I wouldn't mind getting back for more if some new time saver is found, but until then I feel I'm done with this game.