Adventure Island II was released in the US in February 1991 by Hudson Soft. The game's formula follows that of the first game. Island hop your way through 8 worlds full of classic 2d-platforming action and save the kidnapped girl from the evil witchdoctor. The second game turned down the difficulty a notch, but compensated by increasing the fun factor instead. New elements such as dinosaur helpers and an overworld map were introduced and the levels got more variation to them. 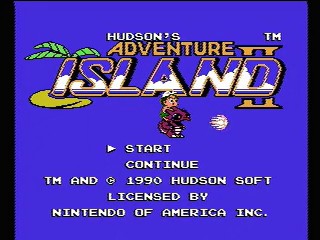 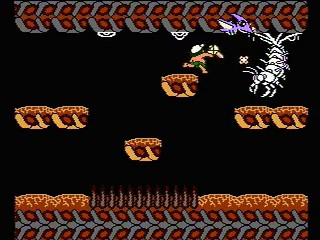 This game was one that I played a lot as a kid, but I never actually owned. I was never able to beat the game as a kid, but I liked playing as the different dinosaurs. Unfortunately, when I started speedrunning the game I couldn't beat it either. The game is really difficult to beat if you lose your dinosaur, so by the time I could actually finish a full run, my time was pretty good. I kept playing it for a few months and got the time down to 25:03 before giving up. I knew that I could save about 15 seconds, but I didn't have the motivation. For some reason, I picked the game up again about a month ago and after many, many painful attempts I was able to get a time that is better than I thought would be possible for me. I am happy with this run, but if someone anyone wanted to go for a run with better execution and riskier strats, then a low 24 or even a high 23 minute time would be possible.

There hasn't been a great deal of speedruns for this game, but shoutouts to Duckfist and Primal85 who have played it in the past and know my pain. Also, thanks to the TASers for showing me that some jumps are possible, but I am just not good enough to make them. Also, ktwo who runs Adventure Island 1 posted some info on SDA (https://kb.speeddemosarchive.com/Hudson%27s_adventure_island_II) for this game and it is all very interesting. I had never seen the instruction manual before and it actually gives you the real names of all the different dinosaurs.

Those names are all way too long and bizarre though, so I will stick to the colors from here on out.

Some things to consider when speedrunning the game include:

The game is pretty basic overall and for the most part you just run right, jump and attack enemies. The first 5 islands are pretty easy with a few exceptions, but island 7 and 8 get very difficult. The early levels can cause problems when they lure you into a false sense of security, which makes it easy to lose focus and forget which egg to choose or when dino switches are needed. I won't go into too much detail about the levels that were good, mainly just the areas where improvements are possible.

1.2 - Got the quick warp, slowed down slightly but kept running, this would cost 1 second if missed.

2.1 - Missed the first jump to avoid a fruit. This adds 2 bars of life to the countdown and each bar is about 7 frames, so 2 bars is about .25 seconds.

2.2 - You can save time by doing the TAS dino switch that keeps Blue Dino's running speed a little longer after switching to Purple Water Dino, but that is hard. At the end of the level you get a quick screen transition because the frog is on the screen (not sure how this works, but it happens about 90% of the time in this level. I have never gotten it in other levels, but the TAS uses this in several places).

2.3 - You can swim through many of the black mines in the water levels which can be helpful.

2.6 - Killed the boss in 3 cycles which is good, but got a slow pattern (not sure what that is based on).

3.2 - Had one quick turnback in the middle section that barely costs any time. Missed getting the quick warp which costs about a second.

4.4 - Beginning of the level wasn't quite perfect and I slowed down slightly while killing the seahorse in the middle of the level, but those don't really lose much time. (In many of these levels, using slightly safer strats in certain parts doesn't cost more than 1 second, but can make difficult levels much easier).

4.5 - Good level, got the 2 round boss kill which can be tough and is nearly impossible if he fires a random shot at you. Losing a cycle/round on any boss costs several seconds so this is very important. There is a strat on this boss that gets your Blue Dino on the top right platform with you and you can kill the boss in 1 round, but it is very difficult.

5.1 - Slowed down a little more than I would like at the end, cost a second or so.

5.2 - Got the safety Purple Water Dino at the end of this level that costs about 2.5 - 3 seconds overall. However, not having a Purple Water Dino for any of the water levels is a disaster and they are easy to lose right near the end levels, as you will see later.

5.3 - Missed the quick warp, had to turn back which costs about a second.

6.1 - Didn't get the quick Pink Flying Dino switch, which costs a few seconds. I had been doing much worse on this in recent runs, so I was just happy to kill the bird on my first jump.

6.2 - Not perfect, but only 1 second slower than my optimal strategy.

6.4 - You don't want to fly too high at the end of this level or you lose time transitioning to the egg room. As long as you get to the exit by the time the music ends you are fine.

6.6 - This was kind of bad. In the TAS, they climb so fast that the screen cannot keep up. That is not realistic on console, but there are several jumps in the beginning and near the end that can be tighter and save significant time. This level is pretty fun because you can use dino momentum and quick turns to climb it very fast. I probably lost 3-5 seconds here compared to my fastest time, but some of the tight jumps and turns weren't worth going for because you can fall back down a platform or lose your dino.

6.7 - This level can actually be faster using the Blue Dino if done perfectly, but that is very hard and I stopped trying almost immediately. The Pink Flying Dino is slightly slower throughout the climbing part, but it is much safer and I can kill the boss quicker with the flying dino's help. This boss kill wasn't perfect, but I didn't lose more than a second or two. I don't even know if the TAS boss kill is possible on console, so flying dino might be better even for a perfect speedrun.

7.1 - This level can be extremely difficult, but some minor safe strats used here makes this level much easier and doesn't cost much time.

7.2 - I got a banana I didn't want on a very tricky jump, but this level is pretty easy.

7.3 - This level can be very difficult, but I used some slightly slower strats that probably cost 2-3 seconds.

7.4 - Safe strats in this level also. You can actually jump under the 2 octopussy's (?) in this level and it would save a few seconds, but it is very difficult. Then, there is a near impossible jump that skips past the moving cloud platform that I stop in front of. Other minor slow strats used throughout to make that level more consistent.

7.5 - The main part of this level was good, but could have been slightly faster. The boss kill looks dangerous, but I am actually positioning the dino where he doesn't damage the boss. If I had us both damage the boss he would turn red very quickly and it is so hard to dodge his attack on that first platform. I should still be able to kill him in 2 rounds, but I failed here because I had no rhythm on my jumps and hammer throws. It is still really hard to get him in 2 rounds though, but compared to my ideal kill that one lost 5-7 seconds. Eggplant is Master Higgins' least favorite food.

8.1 - This level is a few seconds faster using the Blue Dino instead of the Pink Flying Dino. However, Blue Dino is more difficult even though I never really gave it a real effort to learn. The only concern with flying is the first seagull which can have three different positions. One of them is ideal, but you pretty much have to play it safe in case the other 2 positions happen.

8.2 - This is such a hard level to play fast. So, I decided to play slow. I actually did the first half of the level very quick, but I started to hesitate in the second half because it is so easy to brush up against a mine and lose your dino.

8.3 - This is one of several levels that force you to slow down in spots because of the fireballs, but I was able to get through this one about as good as I could hope for.

8.4 - Unfortunately, I lost a dinosaur for the only time of the run in this level, which sucks because this isn't a hard level. Losing the Purple Water Dino here cost about 5 seconds.

8.5 - Last level, slow strats used with the Pink Flying Dino in several places, but at this point it is about survival. Going all out in this level could probably save 5 seconds or so. Final boss was about as quick as possible. Getting a 3 round kill in the second phase is pretty tough and I got very lucky with my last hit on the boss while running away.

Thanks for watching the run and I hope you enjoy it.