Released by Capcom in 1990, Adventures in the Magic Kingdom has the distinction of being the only Disney game to focus on the company's theme park rather than a character. You take control of a kid in a cowboy hat charged with finding six keys strewn about the park's various attractions so the gate to the castle can be opened in time for the big parade. Thrilling. 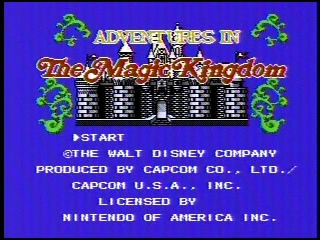 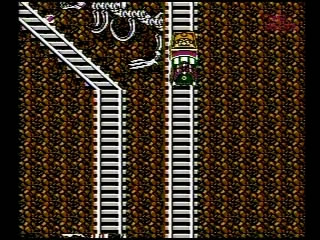 Gotta start with some thanks to the following:

~ZaibirQuild, for showing me that 11 minute run on Youtube
~Master-88 and ZenicReverie, for showing interest in the run
~Aglar, from tasvideos.org, for making a good TAS for me to pull tricks and ideas from
~Everyone who makes SDA, well, SDA. Especially those who run it and maintain it
~And of course, my roommates for letting me deny them of more ESPN to produce this

For those who don't know what this game is about, you are a visitor and close friend of Mickey's visiting Disneyland. Mickey, Donald, and Goofy are ready to start the parade, but can't open the gate to let them out! The gate needs a golden key to open it, which is locked in Disney Castle which in turn needs six silver keys. Mickey tasks you with going around the Magical Kingdom and find all of them. 5 of the keys are found in Attractions-turned-minigames and the sixth is obtained by answering Disney questions posed by visitors at the park.

Because the visitors are scattered throughout the park, the order the attractions are completed is based on the visitor locations. The only requirement is that Autopia needs to be done before Pirates or Haunted Mansion. The reason for this is that Autopia has a great supply of stars. Stars are used to purchase items from Mickey via the Select button. Items available include additional hits, extra lives, freezing the enemy, and temporary invulnerability. Since I plan out how many hits to take and where, getting extra hits aren't necessary. Also, since I don't die, extra lives aren't needed either.

Alright, enough preparation. Let's get onto the run itself.

Space Mountain/Star Tours: Once you get the pattern memorized, this attraction is a piece of cake.

Autopia: This is where the run makes or breaks. I need at least 25 stars by the end of the race for use later. Secondly, a perfect run doesn't stop except at the extending bridge (which you're required to stop at, as you have to wait for it to extend). Sadly, I get stopped once. That spot is the hardest one to not get stopped at.

Next 3 questions: Simple, quick, and mindless.

Pirates of the Caribeaan: Not a lot to say. The underground section could be improved with a little better planning, but I'll leave it as is.

Haunted Mansion: The TAS does a trick where you jump under the ghost and over the zombie to take the upper route. I've practiced it hundreds of times, but only succeeded about a third of the time. Then I had a thought...why not use an Invulnerability to just jump through the ghost? I've got enough stars, so why not? Also, enjoy my powers of levitation as I fly up to the next floors.

Sixth question: So fast, I scare the dog.

Thunder Mountain Railroad: This attraction killed a few really great and near perfect runs. Slight mistakes, the dead ends, and the need to memorize four different (although somewhat similar) routes for each station make this a fun ride.

Last 2 questions: And after answering 8 fun, fact-filled questions, I get the sixth, and final, key.

Well, that's it. I know that others have fond memories of loving some of the attractions while loathing others. But I find it very satisfying that all the attractions here have been sufficiently beaten and all of Disneyland explored in a little over 10 minutes. Good thing that won't happen in real life.

See you next speedrun!