Age Of War 2 is a flash defense/strategy game in which you try to protect your dirt castle from enemy cavemen and use your own infantry forces to try to destroy the enemy's fortress. 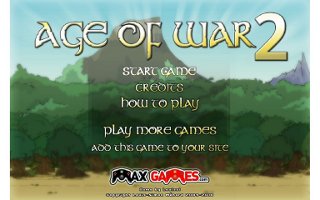 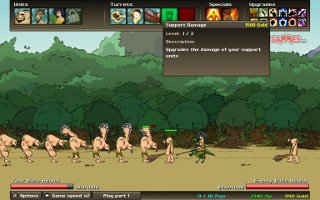 Thanks to Anonymous52555 and ExplodingCabbage, and the game's music (That song is awesome!).

ExplodingCabbage came up with the following very simple and effective strategy (At least on Easy):

When the game starts change the Game speed to x2, upgrade Support Damage x1 and Support Range x2, then wait till the enemies come to your base and their Meteorite Rain starts. Wait a little moment while the Meteorite Rain is going (Otherwise there's a very high chance that lots of your units will be killed) and then build 2 Slingers, 1 Speedy Dino (This was my little tweak which at first I thought it wouldn't be useful to do, but if luck manipulated enough it seems to be more useful), and keep building Slingers. Use your Meteorite Rain whenever it's ready and also upgrade Support Damage again when possible. And keep pumping out those Slingers so that there are at least 5 Slingers in front. That's it :)

My little tweak requires quite a bit of luck because the Speedy Dino attacks when spawned and then often does nothing anymore, and she also tends to die quite easily from the Meteorite Rain for some reason. Then it also depends if the enemy spawns lots of Clubman because they're quite sturdy and because they pause/kill the Slingers more easily and also the 2 front Slingers throw the rocks over their head when approaching... Clubman and/or Speedy Dinos need to spawn a bit though for big bucks to get the second Support Damage as early as possible. Not to mention that your Meteorite Rain needs to take out enemies efficiently (Though in this run my Slingers were already close to the enemy base so the Meteorite Rain wasn't too helpful, as a matter of fact I think it didn't hit any enemy at all :D). And then you need to have extreme luck at their base so that Slingers won't be killed too much as that slows down a lot, so it depends on what kind of enemy and especially when they spawn. It's all a mixture of factors :)

In this run I was a tad slow with upgrading Support Damage again because I was paying attention how the battle went :) But it doesn't matter because the next enemy Slinger dies in 2 hits no matter what. You know, my initial 9 Slingers just marched through the battlefield extremely nicely!

All in all it's a very luck based game.