Released in November 2001 for PS2, (later for GameCube and XBox), in James Bond: Agent Under Fire, you play the role of James Bond, the world's most famous secret agent. CIA agent Zoe Nightshade has gone missing. She had been investigating the connection between a Hong Kong-based bio-technology firm, Identicon, and its parent company, Malpravce Industries. The investigation is of keen interest to M16, so you must rescue her. 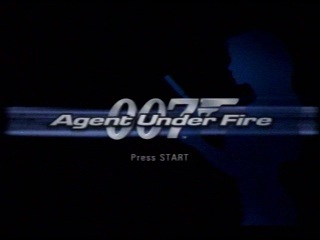 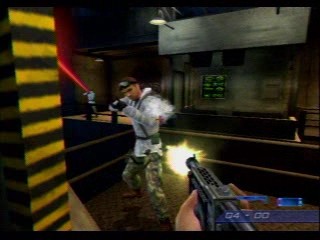 This beats Cygnus's 2005 single segment run on Operative (easiest) difficulty by 2 minutes and 7 seconds using 00 Agent (hardest) difficulty instead. 00 Agent removes the auto-aim, increases enemy aggressiveness and accuracy, lowers Bond's total health, decreases vehicle tire grip, and changes the level Bad Diplomacy around (less dart ammo, more alert AI). On a plus side the increased score bonuses grant Bond gold rewards such as the Gold Grenades & Golden Health (albeit these are given near the end of the game). There are also a few less cutscenes in 00A but the in-game timer does not run during cutscenes anyway. The run's time is calculated by taking the in-game times shown after each level and adding them together. I am totally pleased with this run (more so than any other run I've ever done). With perfect luck and exectution only about 15-20 seconds could be taken off using the same strats.

Trouble in Paradise 1:57 - Very good, only gotten a 1:56 once. There's about a 40% chance of not making it through the plant room with enough health to survive the last area.

Precious Cargo 3:52 - Can't really get lower than this with these strats. The only makable improvement is to shoot the big gas tank as you enter the building with precise timing so that your car keeps its speed through the first section (saves 5 seconds) but it's extremely strict aiming and timing wise and can cause the game to soft lock if you shoot too early, so I don't know if it'll ever be used in a single-segment run.

Bad Diplomacy 1:16 - Haven't gotten lower than this in attempts, really sexy. I can't miss any dart shots, need them all. I shoot the guy to the left of the first elevator because he almost always spots me and triggers the alarm as I leave the elevator to head for the exit at the end.

Cold Reception 2:10 - Killing the 5 guys at the bottom of the elevator seems totally necessary, the KS7 submachine guns they carry can cut Bond's health down super fast and they will follow you into the next room if you ignore them; trying to run past even one of them is a bad idea since I need to reserve health for the last area. The second decryption switch decided not to work on the first try :/. Tiny snag after the last armor. Few seconds off of perfect.

Night of the Jackal 2:46 - Got stuck against a guy in the kitchen but it really wasted very little time since I always have to stop and wait a few seconds for the guy with the AK47 to follow me around the corner anyway (he will kill me if I ignore him). The extra damage I took from the kitchen snag nearly caused my death, I bet I was a shot away from game over. Got a fast Jackal fight, didn't have to dodge any grenades and she ran to the right after only 2 snipes which seems random. Solid time.

Streets of Bucharest 6:56 - Very good driving portion, only two very small collisions. Tank section was great. There are quite a few optimizations in this level that the previous run didn't do. I tightened up the driving route a lot, saving about 10 seconds over the standard path. Driving off the broken bridge and going left instead of straight saves about 5 seconds alone. In the tank section there are 3 obscure timesavers that save about 13 seconds total, the last one being at the end where you shoot the train before the cutscene starts which saves 9 seconds.

Fire & Water 2:23 - This level is pretty broken thanks to my efforts. After triggering Bloch's cutscene at the top of the ladder (this is required to access the pump room) I get onto a railing that's missing an invisible wall barrier and jump to a light sconce and then get into the large main area, skipping part of the level and preventing enemies from getting loaded. This trick only saves about 4 seconds when done perfectly but it preserves my health. In the pump room I clawshot from a specific spot which lets me land on the oil jack and get to the third floor early; this is the biggest timesaver in the game. Extra lucky third floor, enemies died quickly. Close to personal best in attempts.

Forbidden Depths 6:55 - Very solid as it usually is. The trick to a fast Bloch fight is getting one head shot and one high torso shot on him.

Poseidon 2:22 - Have to deal with random AI in the room after the first load time and the explosive barrels decided not to assist me much. Once 6 of of the 7 guys are dead in that room I can progress. Meh green signals in the cloning room. This level can be ~6 seconds faster when luck is kinder. You could also risk not killing the sniper across the way but your survival odds are slim.

Mediterranean Crisis 3:36 - This level is the biggest run killer. A single missed shot on my part can sometimes lead to death, the enemies lay down some serious hurt when you're out in the open. You can risk not getting rid of the sniper in the big room but he killed me about 50% of the time in those attempts. Messed up cutting a lock. Got quick kills on Zoey's captors. Had very good health so I skipped last body armor. Few seconds off of perfect.

Evil Summit 3:23 - This level is very risky too. The snipers at the start can sometimes kill me immediately or lower my health enough for a death soon after. I cut the center computer device down from the edge of the railing which is an awesome way to kill all 4 guys in that room quickly. If I had stayed still on the railing the last guard probably would have run himself into the pit and died but I was afraid of getting shot to death. You actually don't have to kill those 4 guards because the first silo signal is triggerable immediately (it's a glitch), but they'd still be alive and dealing me damage as I traveled between silo rooms so I needed them gone. Picking up one of their submachnie gun helps for the next room too. Jumping from the railing to the ladder in silo room 1 saves about 2 seconds. I use the jetpack to boost up the elevator into the load zone after the last silo room (saves a second). If you have a weapon in your hand when you start the Bloch fight he will not do anything and will let you shoot him, and if you stand perfectly still while doing this he'll always run to the other side of the room right under where he opens the tunnel later. I opted not to do the 3 second rafter platform skip in the Bloch fight because sometimes the game sucks at cycling between items and I could end up not being ready to snipe Bloch's head on the second floor. Very solid time.

Special thanks to: Cygnus, Phazon, and past runners of this game on Cyberscore.

You can check out my segmented Operative mode speedrun of this game in 34:37 here, it contains a lot more small optimizations and some hard strats: http://www.youtube.com/watch?v=4-iT6ndCqo8