If it was always your ardent desire to save lives as a rescue chopper pilot, you should know about Air Ranger. It came out for the PS2 in 2001 from a low-visibility Japanese developer called ASK Corporation and was also released in Europe, though not the NA. In it you're tasked with retrieving imperiled representatives of the human race from places like banks of rapidly flowing rivers, out-of-control trains, and the sea. 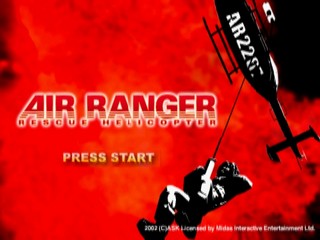 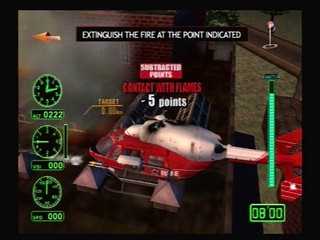 If a game isn't released in all major markets, it usually means it has niche appeal or there's something wrong with it. This game wasn't released in North America and is about helicopters that due to game design can magically see under solid things - that's two for two. To further put the nail in the perceived quality coffin, it was published in Europe by Midas, a company that liked to release utter junk.

So with all that going against it, I feared the worst... Happily, it really isn't that bad of a game. There are only 8 missions and an unmentioned requirement to unlock the second mission of each stage both of which are minus points, and there's a lot of Z-fighting with the textures that's especially noticeable from the cockpit view but apart from that, it's alright. Of course, I got this for £1.50 so I'd be harsher on it if I'd bought it for £40 brand new.

Anyway, onto the run (which has commentary if you'd rather listen than read). There are only really four objectives in the whole game. Fly somewhere; pick something up, drop picked-up-thing off somewhere else, and in the last mission - put fires out. To be fast you need to use as little altitude as possible. Each 'copter goes forward, back and left and right quite quickly, but gaining and losing height takes a while. If I'm not following the arrow directly then it's because I'd have to fly over a building or a mountain or something that's faster to go around.

Mission 1-1 (2:19):
It's easy, it's first, it's the tutorial mission! Fly for 50 seconds, land, and have a 30 second break while that glory hunter Bob goes and collects Dylan the dead guy Hollywood style. I hate Bob, so I leave him behind - it's just coincidence that it's faster to do so.

At first I thought the scream sound effect was the dead guy, but it seems to be the land rangers screaming if you get too close to them with the 'copter. It doesn't always play and the first time I heard it was on my 15th attempt or so and it creeped me out since it seemed to be a real random scream that I hadn't ever heard before.

As long as you get a medal (50 pts), you unlock the first mission of the next stage. To unlock the second mission of a stage however, you need the gold award in the first mission (>=90 points). In a run you'll always get the 80 points for the clear time so you need to collect 10 technical points after deductions. Ten points are lost if you have a hard landing anywhere, avoiding those is a must since you then need two perfect landings to progress. More careful landings = more time lost. They're awarded in relation for how close to the centre of a red circle you land or put something down.

Mission 2-1 (3:45):
Non-solid Bob to the rescue! He shows off yet again, but I get my own back by whacking him against the boat. For the game being a simulation and Bob being a person, he bounces and swings quite well. It's also lucky that I shoved him into a vat of glue before the mission so that everybody who needs rescuing just sticks to him. The only difficult guy is the last one because he's sandwiched between a radar pillar and another structure on the boat but he went great this time, unlike the second person.

I do this and the next mission before 1-2 because more runs ended to these two missions much more than 1-2, so getting them out of the way as early as possible meant much less work down the drain if they went south.

The 'star coin' you see after the boat starts sinking is part of the game's unlock system. There are five per mission and collecting them all unlocks three slightly different helicopters. They're the same as the normal ones but with a blue or military paint job. Ooh, fancy!

Mission 2-2 (2:24):
Despite only being given three difficulty points out of four, this used to be the hardest mission simply due to RNG. The first guy in the boat is always in the same place but the second guy is random. There's no way to tell where he is either - the wind direction is random, the boat orientation is random and the arrow doesn't update to point at him.

However, rather than relying on dumb luck, I found out how to mitigate the randomness. If you rotate the helicopter until the pointy end of the boat is pointing straight right then just go forward in the 'copter.

Difficulty also comes from the waves moving the guys around and the close control of the copter which isn't the easiest, especially when the wind is also blowing you around. Also you have to get realllllly close to the water to pick both guys up, and touching the water is instant death.

The 'cutscene' where the helicopter is paused, rotors and all, is unskippable.

After dropping the hook you have to stay at a stable height until the guy connects you up. I get lucky with starting to drag the tanker just as it's hooked up. You can pull the hook out of his hands which pretty much means a reset.

The D-pad controls the pan and tilt of the three main cameras so I mess around while I get to the bridge and discover the player character has no legs!

The landing is a hard one and I get penalised for it but on the second mission of a stage, you can't unlock anything so points and deductions are of no concern.

Mission 3-1 (3:59):
If a tree falls in the forest, does anybody hear it? Apparently so, since we now have to go rescue the truck it fell from.

Like the previous mission, you're meant to 'lift' the logs off the truck, but you can drag them instead for a small deduction. You're pretty much guaranteed the 20 technical points from transporting the truck to its destination so a 3-4 point penalty is well worth it.

If the hook gets lodged in the ground outside the circle, it's easier to drag it along into it than gain altitude-move-lose altitude. Especially since that'll usually cause the hook to start swinging, which is almost impossible to stop.

Even with the scrappy start to the mission, this was the first time I was under 4:00 and it was a best segment in my splits by 15 seconds. I've literally no idea how that happened since I didn't do anything different to normal.

Mission 3-2 (4:25):
I used to go more direct here and fly over the trees, but staying low by the river is slightly quicker.

The deadly water loses its sting in the shallows so it doesn't matter if you touch it after landing, not that you should aim to do so. Closer to the land means the NPC has less distance to run.

Again, the cutscene of Bob's wussiness and complaining is unskippable.

Picking up the second person is treacherous due to the proximity of the cliffs but it's not that bad. This was a pretty good pickup, Bob didn't go swinging every which way for once as he usually does in the windy missions.

Mission 4-1 (3:13):
At first I didn't think it was possible to collect both guys from the train before it entered the tunnel because of Bob and the deductions for him hitting the carriages. Then when I tried it, it turns out there's a cooldown on the point subtractions which is long enough to skip a carriage and get the second guy without losing too many points.

You can see by my messing with the camera that there actually is a model for the pilot and that he does indeed have some legs. Also that the guys I rescue don't seem to be all that pleased that they've been rescued.

Despite having ten minutes for the mission, the train actually derails with two remaining on the clock by just taking a dive off a bridge. You can see that and other oddities with this mission here (https://www.youtube.com/watch?v=HJSWN4lEHFo)

Mission 4-2 (4:33):
And now something completely different. This mission has four difficulty stars only because it seems pretty impossible to get 100 points on - in an Any% run it's quite easy.

The intended strat is to hover over the flames and disperse your water at a sweet spot. With this approach, if you're too high the water has a lesser effect and if you're too low you get shouted at by Matilda (the lady co-pilot) that the downdraft from the rotors is making things worse. So to avoid all that nonsense, I land next to the flames and squirt from there. You get all the bonus effectiveness of being close without causing a downdraft.

You have to extinguish the four fires I do, out of the seven that are there. You can put out the rest but you don't get anything for it. I'm not convinced you can put out the fires without filling up at least once. I've never managed to even get close to doing it; the fires on the roofs take too much water to put out. I thought tapping R1 might save some water over just holding it, but it doesn't seem to.

And that's the game finished. The only congratulations you receive is the banner saying 'All Missions Completed'. The game keeps track of your flight time on a profile and I show this afterwards (22 minutes for this run) before showing the 'User Data' which is the summary of all the mission results. The flight time is wildly inaccurate as it seems to just be the sum of the minutes, disregarding any seconds. The actual sum of all the times is 26:33.

Since that's run finished, I then load my all-platinum-except-the-last-mission file to show the ending movie. It displays the credits underneath a slideshow of screenshots showing the location of all the star coins. Presumably this is to cajole you into getting them and unlocking yourself some sweet coloured 'copters. It fails on me. I haven't ever gotten more than the one thrust in your face on 2-1 and don't plan to.

And that's wall of text finished. If you just scrolled to the bottom, you might be more interested in the audio commentary. It's technically the same as the text, but comes as a British ear assault.

All that's left is to thank the people behind, in front and around SDA for the obvious reasons like run hosting, run watching and run running. Special commendation to ktwo, who is now the 2nd foremost expert on this game after being subjected to watch so many attempts at it.