Alien Shooter is an isometric arcade game released by Sigma Time in September, 2003. The game follows the actions of a marine tasked to clear out an experimental laboratory where teleportation devices have allowed legions of aliens to pour into the world, using a variety of weapons, tools and biomechanical implants. 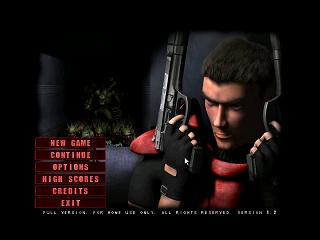 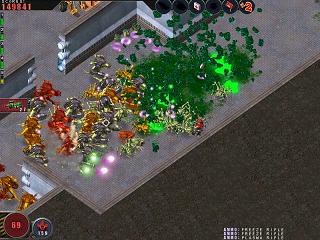 This game is easy to go, but difficult to run. There are no quicksaves/loads, no ability to rerun previous level.
Two of bugs were used for reducing time of run. Firstly one is big shortcut in last mission with not working
trigger; also it's not necessary to kill blue monster in eight mission. Unlike alien shooter 2 this game has
significant difficulty that all monsters must be killed on every level (except 8). So I prefer extra shooting
on suspicious places (especially level 9 with huge amount of monsters). In beginning of game I chose a female
character because it has higher speed and accuracy (but lower health and strength). First 4 levels I had to
economize money and open richest caches order to purchasing three speed implants in fifth level. Also money
from 5,6 and 7 levels used to purchase magma in level eight so I made a accurate calculation and not used
superfluous cashes at all time. It is really to purchase magma in 7'th level but you must open almost all caches
and no any purchasing in first 6 levels. Purchasing magma earlier is not compensate expenditure of time in first
6 levels to find caches. Therefore I decided to purchase magma later. Also I found out a couple of useless bugs
as a pass into the black area in 3-d level or not dangerous stoneslip after dynamite in 4-th level (you can get
stuck there).

Mission 1 "penetrating" 0:18
this is easiest level. Direct running in broken wall.
No cashes

Mission 2 "the beginning" 0:24
There are two variants: to break the wall and take shotgun or direct run with pistols. Second variant turned
out quicker
No opened cashes here.

Mission 3 "the disaster!" 1:34
I purchase shotgun as more effectively gun for yellow and red monsters also for quick breaking of walls.
Firstly I ran for taking grenadegun then for speed implant. There was a best route with dynamite last point
for time economy.
2 Cashes: grenadegun and speed implant

Mission 4 "sabotage" 1:27
Like mission 3 but machinegun was instead grenadegun. In this mission money was strictly counted in order to
purchase last two speed implants in next mission. So I took money in more convenient places. I found a plasma
gun with ammo in very unusual place as a cashe.
4 Cashes: yellow armor + 200 money; machinegun with ammo; plasmagun with ammo; Accuracy implant + 150 money.

Mission 5 "the capture" 2:05
Maximum speed in game. This is really difficult to drive her on that speed, so sometimes I was raming into
walls since that. I prefer to use plasma and rocket against yellow and red monsters and machinegun against green.
4 Cashes: rocket launcher; health implant; 150 money +
2 invulnerabilities; 600 money.

Mission 6 "new treat" 1:01
Direct run to light switch (although it's not necessary but there is green armor) and destroy generator. I ran
to the corner for assembling all include majority of monsters in beginning of level. Then I was shooting to the
lower monster's way which was complicating to allocate them all. Then I blew them up due to big rockets, (To
estimate blowing up count look at the scores in the left upper corner of the screen) and some later blew myself
up order for some quicker killing red monsters (average 2 seconds time different).
1 Cashe: strength implant

Mission 7 "wall of fire" 1:24
Like previous level directly running to the generator. But it was only one way to reach end. So it was not
difficult
No cashes

Mission 8 "in the trap" 1:24
Here is Magma gun at last! I ran almost non-stop. Also killing blue monster is not necessary. Easy level.

Mission 9 "critical impact" 3:10
This was a hardest level. After dynamites taking I went directly to the portals and quickly destroyed it.
Otherwise it would be much more rhinoceroses. Then I destroyed remainder. I used taken rescue bug to fast kill
red and yellow "rhinoceroses" in the end of level.

Mission 10 "the prison" 0:35
I used a big shortcut in this level. Generator was destroyed with big distance due to plasma gun. So spawn
trigger didn’t work and I have to kill only stayed from beginning few of weak monsters in two cells.
Total time 13:22