Released in February 1995, Alien Soldier is well known for its difficulty, but not in the US, because the game was only released in Japan and Europe. The game features large, well-animated sprites and huge bosses that can kill you in a couple of seconds. You go through 25 stages as the birdman, Epsilon, and fight until you defeat the final boss, Z-Leo. On February 23, 2006, Alien Soldier was rereleased as part of the Sega Ages: Gunstar Heroes Treasure Box. Among other features, players could switch between the European and Japanese versions of the game and record replays. 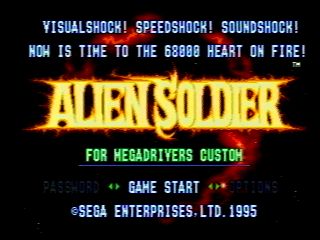 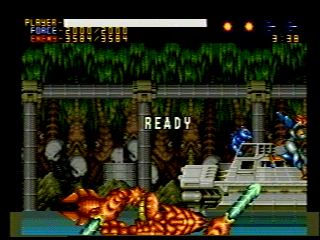 Not much to say. Big thanks to Hebo for his run on Super Hard, and a Japanese fellow (don't know his name, sorry) who made a TAS for giving me pretty much all my new strategies.

This run was done shortly after my run on Super Easy (Editor's note: to reinforce, the old run on SE, not the one seen here), so I'd say it's a little tighter then the other run, with less errors as well. I'll pretty much just mention errors from this point out.

Stage 3: Height is very important on this boss, and as you can see I'm having trouble getting myself at the correct height, and even end up a little lower then I'd like, but the boss still went down from the Phoenix FOrce, luckily.

Stage 11: Right off the bat I jump up and shoot my Lancer to hit a weapon power up so that the powerup will change to the Lancer Force, only I don't hit the power up and when I grab it I end up with the Sword Force. That is not a good thing, but I went with it knowing there was another weapon powerup just ahead, so I wait for the next one to change to a Lancer Force on its own before grabbing it. This costs me maybe 4 seconds of time, but it also costs me 500 ammo for that particular Lancer Force because yOu don't get extra ammo when you pick up different weapons, only when you grab the same weapon you have equipped. Anyway, the boss goes great, but if anyone can finish him off before he teleports you could save a lot of time. 10 seconds at least. I do it in the easy run, but the extra health the boss has makes it very difficult to pull off on hard. This also causes the beginning of stage 12 to be a little longer too, which costs another 2 seconds.

Stage 13: I got hit twice on the 12th boss yet I manage to get really lucky when the snake dies and leaves all the health pickups right there for me to grab. Going in to the 13th boss with full health makes things go a lot quicker.

Stage 15: It's dark here, you can't see the rocks falling down and neither can I. There is a safe spot in there, but I'm just a little too far to one side and get hit a couple times on my way up to the boss, which goes ok. It's a pretty random boss, so whatever happens here happens.

Stage 18: Yeah, I fall in to the pit here, but it only costs me a second so no big deal. And at the end just before the boss when I'm walking upside down shooting a bunch of flies, it may look like I'm just a pansy, but those flies are the most obnoxious things ever. You get too close and they swoop around at random shooting bullets at random, you get hit by something, you fall down, lose some health and then you can't use your Phoenix Force on the boss to knock away all his shields right when the fight starts which saves you so much time. Yeah, I'm going slow for a reason.

Stage 19: Well, it looked like stage 18 and 19 were going to go perfect for once (this never happens), then I take a bad hit on Jampan (Melon Bread for any Gunstar Heroes fans). This hurts me later during the fight with Seven Force.

Stage 20: Not only did I take that hit from Melon Bread, but I get hit on the first form of Seven Force too. Having near full health for Medusa Force (the 2nd form) allows me to use the Phoenix Force repeatedly at the start there, saving me both ammo and time. Well Medusa Force should have been 10 seconds faster, but at least I get to refill one of my Lancers' ammo just before I finish her off. Then I manage to miss lots of shots on Sylpheed Force causing me much grief and then I get hit by Artemis Force right away again (read the Easy run's notes for more on this) wasting more time. I miss shots and then when I finally fill my health up and use the Phoenix Force on her I barely even skim her doing basically no damage. Medusa Force is good, a couple missed shots waste a few seconds, but it's far more acceptable then the rest of that battle. Overall, I probably wasted 20 seconds on Seven Force. I got a time of 2.07, when 1.40 is my goal.

Stage 22: This part can really get on my nerves. I get hit just before those cats on those bike things stop showing up, and I quickly forget I got that health powerup immediately afterwards. I go on thinking I don't have full health and I'm panicking because they stop shooting at me, and I nearly run right in to a missle trying to tempt those cats. I later realize I had full health all along and feel like an idiot when I watch the video again seeing just how close I came to that missile and ending my whole run. Just so you know, if you don't have full health going in to the boss fight you will not be able to finish him off for a very, very long time. Instant reset.

Stage 24: You can kill this guy before he moves to the top of the screen, but I think it's a totally random thing because I've only done it once. In this run he still had a fair bit of health when he moved to the top and I was pretty close to shooting him immediately when he could take damage. Oh well, it's only 6 seconds.

Stage 25: Perfect! Absolutely perfect! You don't know how lucky I was to get the pattern I did on this boss. He never tossed me in the air once, he moved to the left side of the screen allowing me to use the Phoenix Force on him for full effect, and I didn't miss any fire balls. There's a reason this run was so fast, and the battle with Z-Leo is it. Even if I did everything else perfect, the odds of getting that lucky on Z-Leo again is pretty small. In fact, that's the only time I've ever had the chance to finish him off in 24 seconds (you can't do it faster then 24) in a full run. It actually takes me 25 seconds to finish him here, but just barely 25.

Thanks for checking out the video, and make sure to watch after the credits for a quick listing of all my stage times if you're curious.