Unlike the original game, this one has removed most of the horror theme and introduced plenty of flaws to make the fans unhappy. Three months after Alone in the Dark, Edward Carnby and his partner Ted Stryker investigate the kidnapping of Grace Saunders. All clues lead to an old mansion named "Hell's Kitchen". Ted soon disappeared and Edward soon finds out that he was murdered. Can he save Grace from gangsters, pirates and supernatural evil? 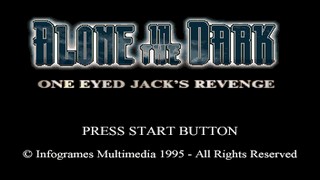 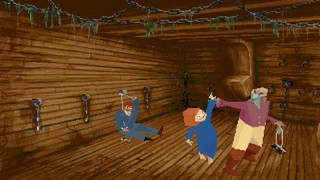 It's funny to see that if Alone 1 is a lot better than this horrible sequel, in terms of speedrunning this episode is a lot denser and interesting to do. I'll see if I can say the same for the last episode...

My goal here was to make a clean run of the WHOLE game (it means the Grace part too, Youtube runners) and to improve the route that we can see on Youtube. If some of my choices may be questionable, I however found a lot of ways to avoid useless actions during the game. As I think my notes of Alone in the Dark were full of useless details, I'm going to try to only describe tricks and important moves, not the things you're actually abble to see by simply watching the run.

Just a few words about the item menu: somehow it seems that the moves that I do during the game influence the cursor in the menu. Sometimes (always at the same places except if I play differently) when I open it and press down, the cursor'll move a lot too fast as if the game kept some "down pressures" in memory. It's not my fault and I didn't find a way to prevent it so I just dealt with it.

Garden: The whole labyrinth skipped only for some bullets, that's a chance to take. I first go along the hedge to avoid a screen change in front of the labyrinth entrance. When I passed the first guy, I stay near the hedge to keep a certain distance with the other guy near the teleporter.

Underground: To reach the pipe-cleaner I keep the distance between me in the door to avoid a screen-change. Also it's important to reach the items with a certain angle to touch both of them in the same time. It allows me to conserv my speed so I turn back easily. I skip cut-scenes by pressing echap (not too fast or I'll open the save menu). After killing the guy and using the crank on the clock-tower, I can move during the scene of moving-boxes. I do it gently because I don't want to fall and I want to only touch the Riot Gun, not the others items. About the elevator and all sorts of stairs and ladders in the game, it's possible to use it instantly if you have the good angle (that's why Carnby stops himself in front of them, he just searches the good spot). Unfortunately it's too precise for a player, when I did it it was by chance only.

Basement: Tearing Music Man's pact kills him instantly. After taking his hook I reach the door by a way avoiding some screen-changes. In the shooting gallery it's important to prevent the green guy to shoot when you enter or he'll modify the block in front of him (in that case it takes 3 hits to put it in the right place). As I touch the white guy "by surprise" he dies with one bullet. I stay in the previous room because the last guy can't shoot me in a different room. Normally the brown guy doesn't touch me twice but it didn't cost me so much time/life so it doesn't matter. I have another guy to kill with the Riot so I take the bullets before leaving.

Ground-floor: The little cooker calls help if I don't wear the Santa Claus suit. It's important to not approach the worktop in the kitchen or T.Bone will move. I choosed to kill the guy in underwear (who appears after I put the poisoned wine) because he can blocks the way when I'll try to escape the dining room later. It does not cost so much time because I have to wait that the poisoned guys open the door anyway. A funny thing about this: the animation of them opening the door, coming and dying works even in the item menu, so I can basically drop the wine, open the item menu, wait aproximatly 20 sec and when I'll come back in game the door'll be open.

2nd floor: I know it seems like if I did random things with Black Hat, but I knew exactly what I was doing and I manipulated his behavior so I could open all the doors without taking a single bullet. Precision and are needed here.

Hidden floor: Bubble Blade has a grenade on him but I don't need it so I just ignore him. I tried to pass the snakes without the pompon but as far as I know it's impossible.

Ground-floor (2): Here's a trick that I'm proud of. There are 5 men in the dining room and 3 of them kill you instantly if they touch you (well to be precise they cause more than 100 damage, I know that by using the inifinite health glitch with poisoned wine). These 3 guys die if you use the grenade on the fireplace but it's quite possible to survive the room if you are quick. It asks chance though because they don't always move the same way when you come in the room and sometimes you'll be killed as soon as you'll be on your feet. Too bad that the key to Jack's room is in the hidden floor because reaching the billiard ball is possible even by the normal entrance... It'll be a HUGE shortcut... Anyway.

2nd Floor (2): No time to lose because Black Hat is still hunting me. No need to fight Dewitt neither, I just use the ball in the chinese pool table. As brefore in the underground, I can move during the scene of moving desk, this time it's important to do it quick to keep the distance with the ennemy. Sometimes Carnby freezes some sec when I use the key on the door, I'm not sure but I think it happens when the ennemy is too close. Anyway, it does not happen here. I spam space and enter buttons during the whole Jack's spitch to pass it quickly. Once I came back to the first floor, I put the body armor because all my inventory will disappear juste after that.

Garden: What a long, boring, senseless part... Anyway, I have nothing special to say about the garden part. I stay at a descent distance of the guy so he does not see me. After using the hook on the statue, it's important to approach the pirate to accelerate the process.

Ship: I attract the guard first so I can take the pepperpot while he is patrolling. Concerning ladders, Grace has 2 different animations to climb them. In one of them, she misses a step and almost fall wich makes the animation longer. I don't know if it's completely random or if something causes that. It never happens with the 2nd scale so... Now I wonder if it's not linked to Grace's angle when I come to it... nevermind. On the boat bridge it's possible to not pass behind the 2 boxes but most of the time Music Man'll see me so I brather not take that risk. In the captain's room it's important to not throw the vase against the door: it'll cancel the canon' shot if it's in the trajectory. As I can only take the bell when the pirate's body disappear, it's better to take the captain's staff AFTER killing the pirate.

Mansion: I think there's nothing important to say here except that you can use the captain's staff at the direct entrance of the witch room without being in the middle of the blue stone.

Ship: The body armor'll be useful during this whole part by preventing damages and hurt animations. I take the short fuse just before entering in the weapons room so it'll have a better spot in the item menu when I'll need it.I have to be careful with my position when I drop the keg of powder or Carnby'll make turns until he finds the right spot. Here's an important trick with T.Bone: it's impossible to take his item during his whole death animation because the skull is too big. But there's a way to avoid death animation. If I kill him during a recoil, the skull'll disappear instantly. It works with all the ennemies but he is basically the only one too big to allow me to reach the item he drops. With Grace, I try to be very closed of the right spot before using the chicken's foot or else she'll reach the spot very slowly. It's important to know that Carnby has full health when you recover his control. Nothing interesting until the boat bridge.

Bridge: Here's the main reason why I wanted a body-armor. The youtube runner brather use the gun but it's very long (you have to reload after each shot) and dangerous even with full health. I first kill the first of the Look Boys because his death makes Mr. Eye climb the scale. As I can't follow him until he finished to climb, I save time by killing the other guys during his ascension. I must kill Music Man for his hook. i'm not forced to kill the other Look Boy but he can be very annoying during the last battle so I do it. once up there, I can't use the hook on the rope until Mr. Eye is dead so it's faster to make him fall (if I kill him by traditional ways, I wont be abble to use the hook until his skull disappears). After defeating Bubble Blade, it's important to fall by the right, if I fall by the left I'll appear at the oposite of the boat bridge. One-eye jack will be invincible until I free Grace and stop the cannons. Obviously only the Captain Nichols' sword can kill him. Now I only have to keep a good rythm and to hit him until he dies.