You are Amagon, the "most decorated marine," and you've been sent to investigate a deserted island. Unfortunately, things didn't quite go as planned. Your plane crashed, and now you've got to travel to the other side of the island where a rescue ship awaits. Quick reflexes and a steady nerve will aid you on your quest, as will shooting everything in sight. Don't forget to collect the Mega Keys, which transform you into the mighty Megagon! This 1989 NES platformer certainly provides a challenge. 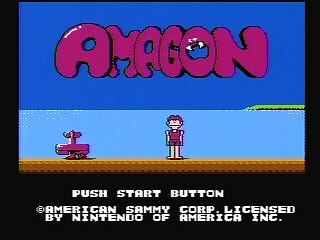 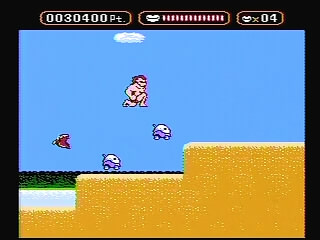 Item drops are the same if you kill the exact same enemies in each stage. I use this knowledge to get two crowns in the first stage, and I should've got more points in the second stage but I missed one guy. Although it turns out that I had plenty to spare by the end.

One of the reasons I enjoy Amagon so much is because of the strategy involved. You have to decide when to use Megagon, when to use the lasers, and so on. It's also nice to see a game where the points actually matter. If only it had better jumping mechanics. Still, it's a pretty simple shooting game at it's core. It's like the next step for anyone who's mastered Contra and Mega Man.

In 2-2, I had to slow down to kill the elephant. You can jump through the trees and simultaneously kill the falling guys to save a few seconds, but my success rate was really low.

The beginning jump in 3-2 is probably the single hardest moment of the run. It's so easy to just fail to reach the platform. 4-2 is the hardest stage thanks to the blue heads. Once I make it to the 5th world, the hard parts are over, and only something silly like walking right off a ledge can stop me...which has happened.

Missed a shot on the final boss, which cost like two seconds. Skelton monster could've been faster too, as well as the end of 5-1. I was so close to getting the second dino with the laser, which would've ended the stage. But since I didn't, I had to go back and kill the third one. Also, the end of 3-1 where I had to grab the item to end the stage.