Released by THQ in 2011, Amnesia: The Dark Descent places you in the role of a man named Daniel who wakes up in a desolate castle with a case of amnesia. It quickly becomes apparent that all is not quite right in this castle, and Daniel must navigate through traps and eldritch horrors in order to discover what is happening in the present and the truths of his own past. 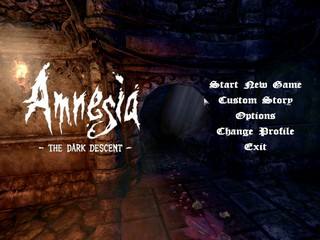 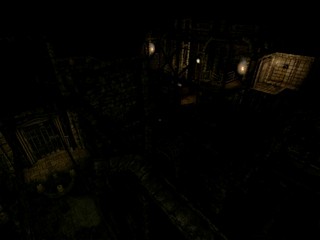 Level by level comments available in the commentary. However, the commentary track is incorrect when discussing the end of timing: timing actually stops when the player loses control after the final 'cut-scene'.

Secondly, the process of loading from the main menu and editing: where a manual segment is made the save and exit selection is still shown, but the loading process from the main menu is omitted. This is primarily because quick load was used on some segments, but also because it is far easier on the eyes to not sit through two loading screens per manual segment! All auto-saves happen during map transitions and these make of the bulk of segmentation.

Un-crouch breach: In certain places, if you crouch and then try to stand, the game will allow you to stand inside thin surfaces above you. This trick is often exploited on cave-ins to get out the map.

Wall breach: As walls are incredibly thin, all that is necessary to breach a wall is to move into the wall enough so that it pushes you out the other side. The tricky part is getting into the wall enough in the first place, though certain corners and welders let you do this by approaching at a specific angle.

Save-breach: If you save whilst holding an item inside the player body, after reloading the game will try to push you out of that object. This can be used to go through walls and other thin objects.

Fast ladder climbing: Simply spam jump and use whilst looking up the ladder.

Reload-transition: When reloading a save, the game temporarily puts the player at a default area called "PlayerStartArea_1" (see map editor for locations of these areas!) before the game moves the player back to the location of the save. Spamming "use" on the load screen after manipulating the direction of the player before saving, makes it possible to use objects from "PlayerStartArea_1" for a frame after loading – typically level doors. If the save used was an auto-save made when the player entered an area, then the fade in/fade out is skipped and the level changes immediately.

Jump stacking: Jumping is applies a vertical impulse to the player. If the jump key is pressed quickly enough and the floor is angled so that multiple jumps are possible (e.g. stairs, barrels), the impulses can stack giving a really high jump.

Boosting (Wall): Certain wall features (called "welders") have a "bumpy" mesh, where each bump may count as a surface the player can jump off if he is moving into the welder. Jump-stacking makes this particularly useful.

Boosting (Other): If the player lands on thin surfaces, or surfaces of a certain angle, movement can often be re-directed. E.g. Jumping onto a ramp may boost you forward.

Flashback Invisibility: Enemies cannot see you if you are currently in a flashback. Not a bug, as the game intentionally slows you down during flashbacks and it would be unfair for the monsters to chase you.

Avoid Damage: If you drop below 50% health then the players move speed starts to decrease. Health regenerates faster the lower the player's health is.

This chapter is from the start of the game to the elevator. The back hall area required some re-recording and re-routing (Re-record the order from storage->guest room->study to the reverse) due to an improvement found (skipping a flashback) when running. The machine room area here has some improvement potential with placing coals, but that segment is really annoying to do, and the clean cog throwing made this attempt the fastest. The storage is arguably the most broken section here, and as the storage tricks happen very quickly, you can check out a slowed down version of the storage route here: http://www.youtube.com/watch?v=_WHAa0dTFMY

Chapter 2 maps end when you get captured in the chancel. The sewers, nave & choir have some really nice routes. Very recently some new routes were found for the cistern entrance and morgue which permit skipping of a bunch of flashbacks in this area – so there are improvements a future run could make here. As with the storage segment, this chapter has some impressive boosts which have been slowed down in the following explanation video: http://www.youtube.com/watch?v=kunA8GwsCWo

Chapter 3 is everything after getting caught, which sadly is a requirement! Whilst it is possible to avoid getting captured, and then access the inner sanctum level-door in the first chancel map before/after collecting the orb pieces, the door doesn't actually link to the inner sanctum and instead crashes the game when you try to use it. There are some new routes for the cells which allow getting out of bounds a little earlier that have been discovered since the completion of this run which could be used to save a few seconds again.

Phantagaming – For some really good initial runs which were a great reference when I started running the game for tricks and routes.

AndreLL – Discovered the reload transition, as well as other tricks, routes and helped with planning.

Speed Demos Archive Community for being awesome! - Especially people who have commented in the thread or helped out with encoding and ruling questions. Also shout-outs to anybody else actively speedrunning this game now, very recently a bunch of new tricks were found which could let me (or somebody else) shave some time off this run. Sub 21 may be possible with one or two more finds.

Frictional Games – For the game.