Developed by Indie Built and published by Microsoft Game Studios in 2003, Amped 2 is a snowboarding game that takes the Tony Hawk series approach, pacing the player through a career mode that includes trick challenges and competitions. 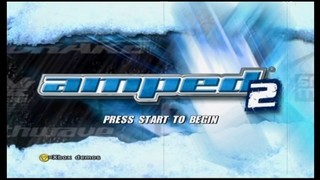 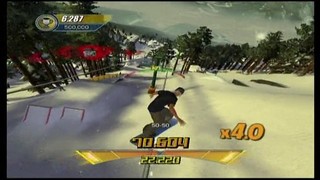 The available completion percentages are "100%" and "rank 1".

If you're interested in maps, information about the game mechanics, speedrun techniques etc for Amped 2, go to (https://kb.speeddemosarchive.com/Amped_2.

This speedrun has been in the works for a long, long time. Not actively, but it's been stirring in the back of my head ever since I discovered speedrunning, several years ago. I played through this game for 100% completion shortly before then. I remember it as being really difficult, but also that I had a good time with it.

Anyways, while I've been wishing that someone would pick this game up and do the speedrun I was hoping for, it's been pretty clear to me for some time that it probably wouldn't happen. However, it's not until recently that I mustered the courage to do this run.

Segmentation
Several of the challenges and many of the gaps and snowmen locations have never before been documented (at least not on the net). So if you've played this game, I think there are a few areas of particular interest. Here is therefore a list of what each segment contains and their respective start times.

Ok, no one asked me even a single one of these questions, but that's probably not the first time that the term ”faq” has been mis-used. These are just questions that I hope will shed some light on what's going on in this speedrun and some trivia around it and the game.

A: The game consists of 10 mountain levels and 4 events. Each mountain level is built up the same way. You have a few start locations on the mountain that allow you to ”free style” your way down. The goal of these runs is to fulfill certain score requirements and also to do some side stuff (own the mountain). Each mountain level also contains 3 sponsor, 3 photoshoot, 3 pro and 1 legend challenge. In the event levels, your goal is to finish ahead of the cpu opponents by scoring points in four different categories (total score, media score, single trick score and combo score). To get 100% in the game, you need to complete everything in the game. So all challenges, all the own the mountain goals and place first in the events.

A: Each mountain level contains 8 snowmen to crash into, 5 gaps to jump and 5 tricks to perform. These can only be done during the ”free-style” runs (so not during any of the sponsor challenges etc).

Q: What's the general outline for the segmentation?

A: There are several rules that determine the segment order and how much it contains (not listed in any particular order):

Q: How do we know that you didn't use cheat codes?

A: For some reason, the ”tutorial” option is grayed out on the first menu screen if you have any cheats activated.

Q: How optimized is this speedrun? Can a lot of time be shaved off?

A: Let's divide the question into four parts: routes, ”time-savers”, segmentation and execution.

”Time-savers”
This speedrun is very close to what I know about the game in terms of tricks and minor time-savers. There are a few possible improvements, but they are either small or incredibly hard.

Segmentation
I started this speedrun almost in the blind. I had completed the game several years ago, but then never played it until now. I didn't play through the game again (it's pretty big) to decide on how to divide it into appropriate segments. This was of course a huge gamble as I could easily have found myself in non-recoverable situations (mistakes in the board upgrade strategy, poor choices of segments etc). Overall, it worked out surpringly well and I'm happy with the end result. I did make a few mistakes along the way, but not worse than something I could fix by redoing a few segments. My skill and standards obviously increased the further I came into the run. This meant I had to come back and combine some of the early segments into one, which also worked out really well. When I look back at the number of segments I used for each mountain, I don't see any glaring mistakes that I have any big regrets over. I do however see a few opportunties to reduce the total number even more, but none without a considerable effort.

Execution
As I've already mentioned above, I started this speedrun without almost any preparations. Once I reached the second half of the game, the early segments started to look more and more questionable to me. I have also ended up redoing many of them. Some in order to combine segments and some just to tighten up the execution. Since a new segment is such a huge time penalty, getting as much stuff into each segment has generally taken priority over execution though. Each segment is therefore in general quite difficult to just complete (or at least without any major time losses). Once I defined the content of the segment and routed it, I usually did attempts until I got one successful completion (bad attempts were filtered out by resets). Same thing when I went back to improve on an earlier segment. One completion is of course not exactly a guarantee for a good time, which I'm well aware of. I'm positive that I would beat many of the segments by a few seconds by adding only a handful more completions of each segment. While even small improvements start to add up for a run of 50 segments, the time investment of such an undertaking would be quite overwhelming to me. My wish was to make sure this game got something that at least resembled a speedrun, but I didn't want it to become my life project for the sake of saving the last couple of seconds.

Q: What's up with the pro challenges? They look horribly unoptimized!

A: The pro challenges are unfortunately subject to some absolutely abysmal game design. You're supposed to follow the pro's line and then do tricks at the indicated spots. If you're in front of the pro, the game will warn you, but still accept the tricks as long as they're done in the right spot and with the correct score. The one exception is the last trick. If you're ”too far” ahead of the pro, the game will simply fail you. I'm not sure exactly how the game defines ”too far”, but if you complete the same challenge enough times and compare the completion times, you can determine a range for the minimum allowable completion time. Needless to say, this requires long and boring preparation work, but at least it's not random.
Once the target time has been pinned down with enough accuracy, a route needs to be created to hit as close to it as possible with a good consistency. That's why you'll see me take wide turns, ”reset the boarder” (when the screen goes black) and possibly other weird behavior as well. So the vast majority of unoptimizations in the run are sadly a necessity.

Q: Is this a good speed game?

A: There are some fun aspects from a speed perspective, but overall this is not a good speed game.

Before starting with the complaints, let's say something about what's positive with this game. The part I liked most was easily the score and own the mountain challenges. I had a good time designing the routes through each mountain to get as much stuff done in one go as possible and the execution was also generally challenging for these runs. Unfortunately, they are vastly outnumbered by the other challenges.

The problem with the pro challenges was explained above. Other negative things I can think of:

A: I guess you should never say something's impossible, but completing this game without including literally 100s of restarts is unthinkable in my eyes. I'm not saying it can't be completed in a single sitting, but having tons of failed attempts doesn't really give me a sense of a speedrun. I hope my speedrun will make you think this game is easy, but the truth is that there are plenty of challenges (mainly photoshoots), where my success rate is down to a few percent. There are also several of the gaps and a few of the snowmen that are hard to get. I haven't kept statistics, but the hardest ones are probably also approaching single digit percentage success rates for me. They aren't on a path or anything and it's pretty obvious that their purpose was to make you explore the game by first finding them and then figure out how to complete them them one by one. I don't think the intent was to do several of them in a row. So yeah, in my opinion, it would require a lot of skill to complete this in something that even remotely looks like an optimized speedrun.

A: The main difference between any% (reach rank #1) and 100% (complete every single challenge and goal in the game) is that you would skip some of the own the mountain stuff and quite a few of the other challenges could also be skipped (there is more than enough challenges to help you reach the #1 rank). Most of the gaps and snowmen would be too far out of the way to be worth the time to collect. However, this would reduce the ”free-style” runs to straight runs to the end, while getting the score requirements done, which would be fairly straight-forward. So basically all the fun routing stuff would be thrown out of the window. A segmented any% run would therefore look mostly the same as a 100% run, minus all the fun stuff. I will however say that an any% single segment doesn't look completely unrealistic without too many failed challenge attempts. Very hard, but probably doable if someone made it their mission to get it done. But I have my doubts about this game ever being speedrun again.

Q: I spotted an inconsistency! You CHEATED!

A: He he, I doubt you did. But there are actually inconsistencies, so let me go through what a diligent observer could find: