This is one of Christine Love's visual novels that all appeared post 2009. She's a Canadian writer interested in social and interpersonal themes. In Analogue, you find yourself exploring the disappearance of a space ship 600 years in the future. The player must interact with the ship's two AI characters through the use of a parser and make inferences from the incomplete body of data they are presented. The game has multiple endings. 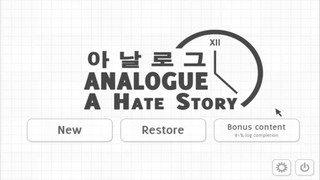 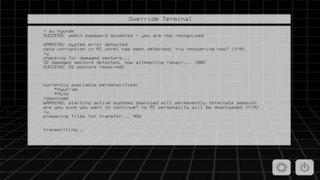 Special thanks on this run to:

SDA Staff & verifiers for dealing with how much of a newbie I am to speedrunning.

My twitch stream viewers, for without some of them I may have never gotten into speedrunning.

Steam sales & based Gaben, because I probably would've never gotten this amazing game if it wasn't half off. #Cheapskate

This run has a story with a good moral about speedrunning, go gather around, children!

Once upon a time, there was some idiot kid who was new to speedrunning named "xVirtualNinjax" - cringy name, am I right? Anyways, he decided to submit a Naruto Revolution run of something called Ninja Escapades, and he did it in an Individual Level format. It turned out that it's supposed to be Single Segment, and since this kid was an idiot (as explained earlier), he wasn't able to submit a run and had to have it declined! So remember kids, don't be like that stupid xVirtualNinjax kid, and do your research before you submit your speedrun!

Anyways, I was casually playing this as a break from attempting to run the Ninja Escapades and managed to find a few tricks that allowed me to get a ridiculously low time on Analogue: A Hate Story. Here's the rundown of the steps I took:

1. Upon starting the game, go to the pause menu, get out of it, and press one of the three potential skip buttons (enter, spacebar, left mouse button) to skip the connecting section. Repeat again to skip the Connection Established! section.

Explanation: This step saves a bit of time as it allows you to skip the early intro part that looks unskippable. For some reason, the skip button is different most of the time when you try to skip through each box in the intro and ending, so you have to just get godly RNG here (it is a 1 in 3 chance afterall, so it's not too big of a deal). The reason why there are weird white flashes during the section is me going to the pause menu and getting out of it really fast, as you can press the pause button twice to immediately get out of it. The reason why I even use the pause menu glitch in the first place is because without it, there's a fairly noticeable delay between when you can skip through the connecting scenes, so doing it allows me to save a couple of seconds.
Fun fact though, if you press it three times, the game crashes. I learned that the hard way.

Explanation: This enables *Hyun-ae and allows you to move onto step 3. This part is required for this route to work. The command doesn't seem to be case sensitive, and although enable_ai must be typed with the underscore, *Hyun-ae does not need to be typed with an asterisk, capital H, or a hyphen/space, as the game may lead you to believe. Silly game, grammar are for them kidz!!!1!!

3. Use command quit and skip through all of *Hyun-ae's blah blah stuff

Explanation: Quit brings you to the required stuff that *Hyun-ae says to you. Unlike Step 1, Enter is a fully functionable skip button here, and is faster than using space because at one point she asks you to input your name, and spamming space will just waste time because you're putting spaces in the text box that you don't even have to put stuff into in order to continue. There's two parts where she gives you a yes or no option, and it's faster to press Yes the first time and No the second time.

4. Go back to the console

Explanation: I pressed the button that sent me back to the console. Wow, hard work. You can use Enter here to skip a few seconds worth of time waiting to go to the console.

Explanation: Once again, hyunae doesn't have to be spelled with all the random grammar stuff. In the game, you're supposed to find this password through reading some of the files, but you can actually use the password as soon as you finish talking for the first time with *Hyun-ae. Another fun fact: I learned this on accident when I guessed the password right on my first playthrough of Analogue: A Hate Story.

There's nothing I can do here (that I've found so far) that'll make this go faster, as the pause menu glitch doesn't seem to work here. So much for sanic speed.

Once you use the password, you can finally download the files on the spaceship and get one of the various endings.

8. Use the pause menu exploit again to skip through some time on the downloading files section.

Explanation: Refer to the explanation on Step 1 for information on the pause menu glitch. White flashes galoreeeeee

gg ez no re 3 gud 5 me such kawaii many ending wow such feels too intenseeeeeeeee. The Total Completion Rate is of all of your completion from all save files combined, so that includes runs from when I wasn't speedrunning the game. So, the Total Completion Rate means nothing to this run. The real number that pertains to this run is the first one, which shows the completion rate of just the playthrough you did, which turned out to be a beautiful 0%.

Overall, I this run was pretty much perfect, and the skip button RNG went really well for me. I doubt this'll be beaten any time soon. (In before someone somehow manages to prove me wrong with some godly MLG tactic a few days after this is hopefully accepted)