Anticipation is a digital adaptation of the classic board game Pictionary for the NES, released by Rare in 1988. Players need to quickly identify crude drawings of objects to move their pieces ahead on the board to win a virtual pat on the back. 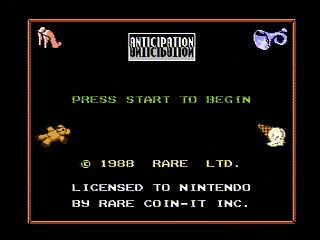 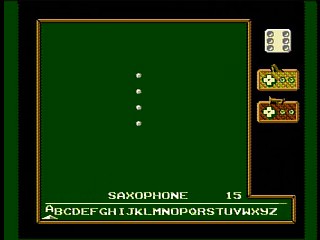 It feels weird typing up serious comments for this game, but here we go. Basically, this is pictionary. The game draws a picture, and you have to draw it. Furthermore, it has a trivial pursuit thing going on where you have to collect one of each color before advancing to the next floor. I'm playing on "very hard" difficulty, which makes the harder categories more likely to appear, and removes various hints from the game (category name, # of letters in word, connect-the-dots dots).

To be very clear, there's no "secret" to what I'm doing. No pre-determined word patterns or anything like that. The words are random. I have to be able to identify them really really fast (14/16 times with a 6 still on the die), and there are at least 100 different pictures within the categories I have to memorize.

I opted to use the very dangerous drive-by letter entry wherever possible. The acceleration of the cursor is super weird, especially when looping around from A to Z. I'd have no problem submitting a run with a couple typos in it, as long as it meant good word luck (typos waste like 3 seconds). Fortunately, this run had no typos. The word luck wasn't super great, but at least it looks really good, and is still 8 seconds faster than my 2nd fastest time.

Anyway, I choose 2 players because if I answer then can't remember what the word is, it will continue to draw the word instead of saying "NO ONE CAN ANSWER LOL" and loading a new puzzle.

Spear: Happy with this word, quick in every aspect.
Man: Mixing up man and woman happens a lot, until I learned that men have oval shaped heads. Like a football. Note that I needed to wait until the die rolled down to 5 in order to get a red puzzle next.
Jet: Great word, took a while to be able to identify it quickly. The start is very similar to "truck", and the game also has "plane" and "airplane" to confuse me.
Bell: Another upper-tier word. Level 1 was amazing.

Helmet: Average word, great execution.
Umbrella: Again, I had to wait until 5. Umbrella took a long time to learn to identify quickly, because it draws very slowly. Average word because it draws quickly at the end (only 1 loop).
Parachute: Awful word, the letters are nowhere near each other, and it draws slowly. It also looks exactly like ball, bowling ball, beach ball, sun, saturn, and probably a bunch of others at the start.
Cassette: Below average. Draws slowly, takes a while to enter.

Pitcher: I can't believe I recognized this so fast. Average word.
Blimp: Looks really similar to hot air balloon. A bit thinner. Above average word.
FEATURE SQUARE: This is hard. Hit the button right when "press to stop" appears. Too early and you drop back on to the grey square.
Axe: Top tier word. A bit awkward to type in, but it draws instantly and is only 3 letters.
Radio: Average word, takes a while to draw.

Mug: I actually let this draw for a bit before answering so the drawing music loops one fewer time. Average word.
Ark: Answered too early so the music loops one more time than it had to. Bad word.
FEATURE SQUARE 2: This one is harder, I have no trick for it. I have choked here.
Mace: Yes, it's a flail and not a mace. Average word.
Saxophone: What a jerk of a final word. When I see the 4 dots, I answer immediately, then have to figure out whether it's Saxophone or Walkman, based on where the letter-entry carat is (over the H or the I), which is why I delay a bit at the start. I actually thought my time would be around 7:59 (the same as my PB at the time) so I was rushing to enter this word in very recklessly. Then it turned out I was 8 seconds ahead. Oops. That could have been bad.

For the record, I never got tired of the music.