Released by Activision in 1989, Archon is an early example of a board game-style video game done right. You control either the light or dark side and attempt to slaughter the opposing pieces in single combat with an end goal of occupying five specific spots on the board simultaneously. If while playing chess you ever found yourself thinking your queen should've slaughtered the knight that just took it regardless of whether it was the attacking piece or not, Archon might be right up your alley. 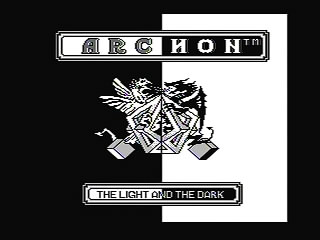 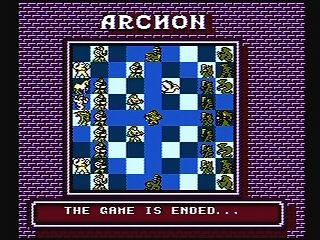 I chose to play as the Dark Side because I really don't like the attack of the phoenix. I let Light go first because it can be faster if the luck is good enough. I do my best to minimize battles, and spell casting (basically if the wizard casts a spell, then it's a reset). There are many options the AI has when planning their attack. The best case is the AI moves a fighter to my dragon; it still takes two hits, but the fighter comes right at me and I can kill him without trouble. The Phoenix isn't too bad, but can be a pain if he blocks my shot with an attack. The unicorn and genie are the other possibilities for this fight. Here I get the unicorn, and since I didn't take a hit against the wizard I get to be more aggressive and take 2 hits without worry. Game Ends Dark Side 10 turns.

I don't think it's possible to get away with only one battle. I've yet to see the AI not attack if I try to wait to kill the wizard on my last turn. If that's actually possible, then that would save about 10 seconds. It may be possible to move the shapeshifter to the middle before attacking the wizard and draw out a knight. This may be an improvement, but I've only seen the phoenix or genie attack when I attempted this. It does happen in the demo though.