Originally a tavern minigame from Might & Magic VII and VIII, Arcomage was released as a standalone game in 2000. It supports netplay but doesn't have the full set of cards or rules. In it two rival wizards vie for supremacy over an area of land, represented by players taking turns to play cards representing spells or monsters, and it has nothing to do with Magic: The Gathering. 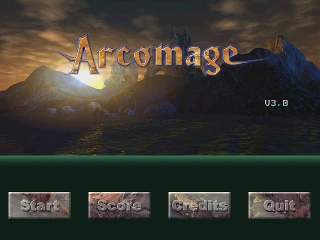 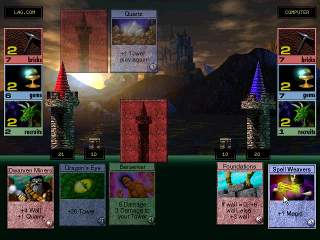 Last time I claimed that it would take a lot of restarts to beat my runs. Well, I did a lot of restarts. I've been sitting on this run for a long time because I wanted to submit a new Building victory at the same time, but it hasn't happened.

-- TURN 1
Me: Full Moon (0) - both players gain 1 Dungeon, you gain 3 recruits
Enemy: Miners (3b) - +1 Quarry
Full Moon is a super good start. Without it, I wouldn't have been able to play my big Monsters. My enemy having an additional Quarry doesn't affect that much, but thankfully it gives him enough bricks to do something very stupid on his next turn.
-- TURN 2
Me: Moody Goblins (1r) - 4 Damage, you lose 3 gems.
Enemy: Tremors (7b) - both walls take 5 Damage, play again
Enemy: Power Burn (3g) - own tower takes 5 Damage, +2 Magic
This was an amazingly lucky turn! My opponent trashes his own wall AND tower, while I get a very efficient Monster out.
-- TURN 3
Me: discard
Enemy: Discord (5g) - both towers take 7 Damage, both -1 Magic
I didn't want to play Tower Gremlin because I noticed I'd have the 18 recruits necessary to play Pegasus Lancer next turn, which would nearly kill my opponent. Then he goes ahead and plays Discord anyway, so he's dead meat.
-- TURN 4
Me: Pegasus Lancer (18r) - 12 Damage to tower
So I win.

As it turned out, the Moody Goblins weren't actually that important - all the useful damage was dealt directly to his tower. This means that, yes, this run is also improvable. Good luck on that!

ABOUT THE GAME
Arcomage is a cool little minigame involving a set of cards, two rival wizards and a lot of numbers. Originally it was part of the Might & Magic series, but it can also be played on its own. It's quite easy to pick up. You are a wizard in a Tower, protected by a Wall. The size of these objects varies as the game goes on. You also maintain stockpiles of resources, of which there are three types:

For these to accumulate you need Quarries, Magic and Dungeons respectively. There are numerous cards that deal with increasing your own numbers of these and decreasing your opponent's. There are also some cards that increase both player's counts. Balancing the need to stockpile resources to pay for more expensive cards with the ability to keep your Tower from being destroyed comprises the core gameplay. There are two main ways to win:

Destruction: this happens when your opponent's Tower reaches 0 size
Building: if you manage to reach the maximum height with your Tower (by default, 50), you achieve this victory
Wall: if both wizards 'win' at the same time, the size of their Walls is compared. I don't know what happens if they are equal too

I've done runs of the first two, though I do have a recording of the third one occurring.

The deck itself is always made of the same set of cards. Some cards have multiple copies in the deck, I refer to these as Common, and the others as Rare.

BUILDING RUN
In opposition to the Destruction run, this time I need to efficiently gain Tower and also protect it from damage by maintaining at least a passable Wall. On the other hand, I could try to ruin my opponent's Recruit/Dungeon count so that they can't pay for the damage in the first place. Important spells:

These spells are very cheap for what they do, although they come at a small hit to other resources. And of course, they are all Rare. Power Burn may seem counter-intuitive because of the loss to Tower, but it very quickly makes up for itself.

This time my opponent goes first. This isn't always a bad thing, in fact, this time it was very good!

-- TURN 1
Enemy: MadCowDisease (0) - all players lose 6 Recruits
Me: Quartz (1g) - gain 1 Tower, play again
Me: Spell Weavers (3g) - gain 1 Magic
The enemy's first play pretty much destroys their ability to use green cards for the rest of the match. Bad decision. Quartz is one of the small group of cards that has a miniscule effect then lets you take another turn. Generally these are very useful though their effects are tiny. It ended up being extremely important for me. Spell Weavers is the second cheapest way to gain Magic, so I was glad to draw it.
-- TURN 2
Enemy: Reinforced Wall (8b) - gain 8 Wall
Me: Dwarven Miners (7b) - gain 4 Wall, gain 1 Quarry
Neither of these cards has a huge impact, but that additional Quarry will help me play the few red cards that increase Tower.
-- TURN 3
Enemy: Amethyst (2g) - gain 3 Tower
Me: Spell Weavers
I don't care how tall my enemy's Tower gets as long as I outrun him. The second Spell Weavers gives me all the Magic I should need to finish quickly.
-- TURN 4
Enemy: Crumblestone (7g) - gain 5 Tower, enemy loses 6 Bricks
Me: Crystallize
Losing Bricks sucks, but I can deal with it. Crystallize makes its welcome entrance.
-- TURN 5
Enemy: Goblin Mob (3r) - 6 Damage, you also take 3 Damage
Me: Foundations (3b) - If you have no Wall, you gain 6 Wall, otherwise you gain 3 Wall
Luckily I had enough Wall left over after the Crystallize to block the Goblin Mob's attack. Foundations gives ma tiny boost to my defenses.
-- TURN 6
Enemy: Basic Wall (2b) - gain 3 Wall
Me: Quarry's Help
The other power Tower-gain card appears! Only 11 left to go now, and I have a Sapphire in my hand for that. I still have 6 Gems, so my 4 Magic will give me enough to cast it next turn, as long as my opponent doesn't play Imp, Discord or Thief.
-- TURN 7
Enemy: Minotaur (3r) - gain 1 Dungeon
Me: Sapphire (10g) - gain 11 Tower
He didn't play any of those 3 cards, so I win, hitting exactly 50 Tower.

Thank you for watching my first 'official' run on SDA! While I can't claim either of these runs are 'optimal', they are both extremely unlikely to occur. Beating them will take a lot of restarts. If you want to ask me anything else about Arcomage, feel free to message me on the forum or catch me in the IRC channel. I regularly check both.