Army Men 3D for the original PlayStation was released in 1999, a year after the initial installment of the series came out on PC. It uses the same mission structure to rescue POWs, and contains a full arsenal of weapons plus vehicles for Sarge and his men to take on the Tan army. 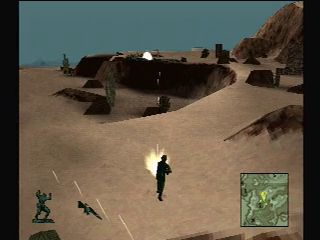 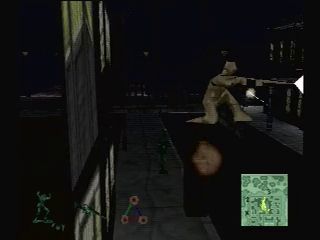 Timing: Timer starts after the mission debrief in the first level.

Act 1 Desert: Most of the levels are simple its mostly get to the end of the level or blow something up. But level 3 is one of the worst level mostly sweeping the mines can instantly kill any run just because the jeep you drive to pick up the hostages can only take 1 mine hit before exploding. In addition some of the mines dont get sweeped and can basically act as a suprise to any player which ultimately ends the mission. After the minefield the rest of the mission is easy unless your jeep doesnt get blown up by the guys using the Automatic Rifles. The next couple of level are pretty simple just done in fast execution. The last level for Act 1 "Dry Gulch" has a zig zag pattern to over come the mine field but I recently discovered that you can just run to the right side of the minefield get hit by one or two mines and then hug the right side of the mountaine until you reach the end of the mine field.

Act 2 Apline:
Act 2 is mostly consist of 2 rescue missions the first mission and the last mission of Act 2. The 2nd level I couldnt clip off the side of the mountain and wasted around 2-5 seconds. The reset of the levels were done relatively well even the last level which I had many issues were the Ai partners will not want to follow me.

Act 3 Bayou:
The shortest of the other Acts. Act 3 is probably the hardest. The first level was not done the way I wanted as I missed the first guard tower missed the Bazooka guy and missed another guard you. You have to kill a certain amount of enemies to complete the mission. If any enemies leave the area then the mission would not complete and you would have to search the whole map to kill that one enemy. Colonel Mansion was pretty simple I thought I would miss the last tank kill because the Colonel will not appear unless you blow up all the tanks near him and some times the game will not register when you blow up a tank and you will waste time because of it. After I get the Colonel your suppose to be in a certain angle and spot to get the key which is suppose to appear and it makes it faster than just walking towards it which I got. The next level Bridge Battle is one of the worst level its one of the darkest levels for no reason. I also did a slow strat for this level instead taking the Colonel with me while I took down the rest of the enemies it was faster if I took him with me but since the run was really good I didnt decide to do it. The next level Burbon Streets is pretty simple its a walk to a certain area and blow up a tank. The final mission I did a quick Mortar shot instead of taking my time with before I was going to get killed by the Flamethrower and the reset of the level was just avoiding Bazooka men which even on easy can take half of your health. After avoided the enemies I walked up the pedestal and activate the portal and the run was over.

Special thanks for Sparcx for helping me do indivdual levels and gave me a bit of competition in the process also he helped me route most of all the levels in the game.