Art of Fighting was originally released in 1992 and ported to the SNES in 1993. South Town is no place for the weak. Yet into this urban battle zone comes Ryo, braving the mean streets in order to rescue his kidnapped sister. With his friend Robert, the two must use all their strength and skills to battle and defeat the toughest fighters ever assembled. These fighters are big, powerful and strong. Each possesses special skills that will be hard to counter. Ryo must master the Super Attacks if he is to be victorious. Only the strongest of fighters will survive the streets of South Town. 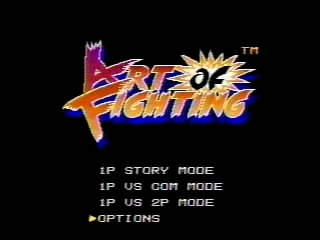 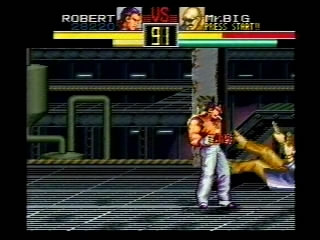 Note: Only runs on level 1, 4, and 8 difficulties are allowed. Allowing the other difficulties would result in too many categories.

Thank you to SDA and Crew for continuing to operate this site and host our runs to give this speed running stuff such a cozy home.

Here we go with the Fighting Games again...

So this run came at the request of my chat. I usually complete one game at a time, but will play random things often as well. The subject of FIghting Games came up and I started talking about Art of Fighting. Now my level 8 run has been hosted at SDA for a while, but some people were wondering how fast a level 1 run would be. So I did it.

I have long since mastered the SNES port of this game and the controls are so much better than the Arcade version, but still horrible.

This run took one night...

The only thing to figure out was how to attack. Things came out pretty similar to the level 8, but the Fighters KO much quicker on level 1 and block less. The Super Fire Blow is still mandatory as it is even more OP in this run.

I use Ryo simply for variety, Robert has a tiny edge that is necessary on Level 8, I explain that in those notes.

Todo - Kicks to face till dizzy. Throw into a wake-up fireball. Can't do much more.

Jack - Same as Todo, but I end with a jump kick as his stand up animation is so much longer. It's just easier to time.

Initiate Super Fire Blow - I jump on purpose at the beginning. The game doesn't register directional input before starting. The jump ensures correct input for the first fireball.

Lee - He has a strong tendency to kick you out of the air. I negate this with an opening fireball. I follow with a jump kick and a Haoh Shoko Ken.

Bottle Cut - Knocking some bottles down was on purpose. It actually takes longer to tally the score if you chop zero bottles.

Micky - Same moves, but in a different order. Just for a change of pace.

John - Noticing a pattern yet?

Karate - Still need perfect execution. On level 1, he can still mess you up.

All in all, I actually had fun with this. It started as a joke, but it's a legit run. You can't give me crap for it since I also did a hardest difficulty run... I still say Fighting Games can make for a nice run. But it's a more accquired taste. Get your beat-down on!

Big thank you to SDA staff. Mike, Nate and my first official nod of gratitude to Breakdown. You guys are the greatest...of all time.

So, why on earth did I run this game? This is just one of those games that hold a special place in my memory from playing it as a kid. If I had originally played it now, I probably wouldn't care much for it. And I mean the SNES port, not the arcade version. The SNES take on Art of Fighting is watered down to say the least. It also has god-awful controls, especially for a fighting game. And the difficulty, at one time, was almost more than I could take. But I can still take this game anytime. And I was further inspired after watching Sir VG take down Castlevania Judgment.

First off, Robert is necessary. His jump kick has just a few pixels extra reach and that makes all the difference. That and he fights while wearing a gold chain. Bling = Win.

Todo - You know you get your ass kicked for wearing the red sparring vest in a real fight. You should notice me walking into his fist. This lets me unleash my Ultra Combo Super Finish Death Move. This saves a few seconds then if I just jump kick to the KO.

Jack - Rinse and repeat from Todo. I lose a second to Jack taunting me though. But he is also 50/50 on his pattern. Sometimes he'll do the flying fat ass drop kick. Jack was the number one cause of resets. At least he is the second fight.

Initiate Super Fire Blow - You may question this. Just wait. This move saves several seconds per fight, netting a lot of time saved. And yes, I jumped on purpose at the beginning. The game doesn't register directional input before starting. The jump ensures correct input for the first fireball. And it doesn't cost any extra time.

Lee - Wolverine on crack. Perfect round. He even gets hit by the second fireball.

King - I always liked the music in this stage. Don't ask. I mess up the second fireball. But there is no time lost as she blocks the next shot requiring the final jump kicks anyway.

Bottle Cut - Fail. Knocking two down was on purpose. It actually takes longer if you chop zero bottles.

Mickey - Flawless. Best time possible. Mickey gets up a couple frames faster than everybody else, so he can hit you out of the air if you mis-time jumping.

John - Really? Name the white, military guy John. Creative. Anyway, John's a jerk. This is a standard round. Your only hope for a better fight is to stall just a moment on the second fireball to trick him into trying to shoot a projectile at you. I do this, but it doesn't work. And on the very off chance it does, he will often get his shot off so it goes through and hits you. Reset. Or his shot negates yours. How? Reset. So this round is definitely acceptable.

Mr. Big - Only mistake of the run. Jump kicked too early and wasted two seconds. He made it up to me by getting hit by both fireballs.

Karate - You don't get any better than this. Take that 18 years of pent up frustration at some of the cheapest gaming AI ever.

The main thing I set out to do was to try and bump the stigma that fighting games make for boring speed runs. I hope I have succeeded.

For a time when "Super Moves" where not really heard of yet, things like the Ryuuko Ranbu (Ryo/Robert's Super) made this game awesome. I still remember when I saw it for the first time. Epic.