Released in March 1990, Astyanax is a fine example of style over substance, as the big, colorful graphics tend to cause the game to lag — a lot — when too many characters get on the screen, which is most of the time. The plot involves a teenager named Astyanax who is warped to the land of Remlia to save Princess Rosebud from the evil Blackhorn with his axe, Bash, an ironically named weapon since Astynax is usually the one getting bashed. Apparently Blackhorn is a very educational villain, as he sends out clusters of blueberries and grapes to encourage healthy eating habits, the bane of every Nintendo owner. 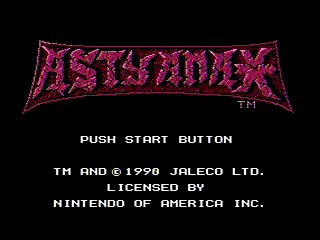 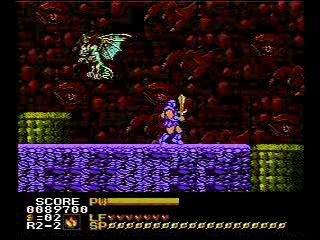 This was actually one of the first games I had considered running, as it was my first-ever "favorite game" as a kid and I knew there were a lot of possible improvements to the original record. I can enjoy playing it even now in spite of all the slowdown...maybe it's the music, maybe it's nostalgia.

Since there's audio commentary, I won't say too much more here. Just know that this took longer than you would expect to optimize, particularly figuring out when it was worth visiting the fairy. There's a lot of lag management, careful weapon choices and magic usage, and of course a fair bit of luck!

Thanks to Emptyeye for giving this game some love with his original run, dragonxyk for his TAS (which provided a number of helpful strategies), and of course everyone who's watched my stream (http://www.justin.tv/srkfunkdoc ).