The Awakening series by Big Fish Studios made its debut in 2010. It features puzzles and hidden object hunts in a castle and its surroundings where a freshly arisen princess Sophia has no clue why she's there and must find out what's going on in this first installment. She's accompanied by a hint fairy and will come across fantasy staples such as goblins and gnomes. But where have all the people gone? 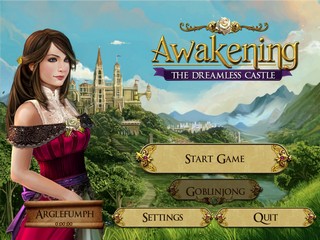 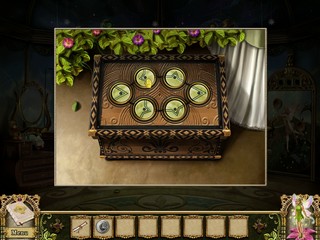 This is my run for Awakening: The Dreamless Castle.

A copy of this run with my commentary can be found here: https://www.youtube.com/watch?v=0X2z4FHsTt0

When I started this project, there were only two runs of the game that are under a half hour: 26:53 by plal1 and 28:48 by tanky 77. They both used the iOS version of the game. Unlike the PC version, the iOS version fills the hint meter while you look at the journal. You can easily abuse this for speedrunning purposes, since the in-game timer doesn't run when you're looking at the journal. The in-game timer also doesn't run during cutscenes, or when text boxes appear.

The biggest problem in this run was dealing with the jigsaw puzzles. They are completely randomized. Every time you start a jigsaw puzzle, the pieces are put into random locations. Most of the time, they overlap each other and the board, so either you can't get at the pieces you want, or you can't see where the pieces are supposed to go. That's rough for a speedrun, where misplacing a single piece wastes time.

Whenever you pick up an item, there is a one-second animation of the item going into your inventory. You can skip the animation by quitting the game, which I try to do at the end of every segment. The fastest speedrun possible would quit-skip every single animation, but that would be a run of several hundred segments, far too tedious for me to attempt.

This segment's pretty straightforward, since it's the start-of-game tutorial.

It only took a few attempts at this segment to realize that the game's click detection is somewhat shoddy. Or, more likely, my clicking skills are somewhat shoddy. To get around this, I double-clicked every time I picked up an item.

The door puzzle is randomized. I was lucky here and got the ideal setup, which only requires 3 swaps. Generally, it takes 5. This makes up for the moment of hesitation on the flower puzzle solution, which is probably the biggest mistake of the run.

Segments 3 and 4 were originally supposed to be together in one segment, but twice, I had good goblin-jong runs killed by bad fairy jigsaw puzzles. So when I got my best goblin-jong time here, I made the decision to quit immediately and split the segment in half, rather than risk ruining the whole segment on the next puzzle.

To give some idea of how picky the in-game timer is, I got a time of 4:04 on two different segments. In real time, they were 53.43 seconds and 52.77 seconds long. That's a difference of 1.34 seconds, but the in-game timer accepts them as equal length.

Tile puzzles in this game are rough, because the farther apart two pieces are, the longer it takes the swap them. Ideally, you only make swaps between adjacent pieces. Also, it's ideal to get two pieces into place with the same swap. For this particular tile puzzle, it's easiest to focus on getting the sixteen border pieces into place first.

This is the longest segment of the run! It's mostly just optimized clicking and navigation, with two somewhat long "repeat the pattern" puzzles. Originally, this segment ended at the jigsaw puzzle in the cellar, but it turns out you can skip that jigsaw puzzle.

With this segment (and the next segment), I somehow managed to get perfect timing with the in-game timer. In real time, this is only one second faster than my second-best time. According to the in-game timer, it's a two-second improvement. It's nice to see the timer work in my favor for once!

In general, the timer is a bit strange in the Den. The jigsaw puzzle at the start? The timer doesn't operate, unless you watch the cutscene that follows. The timer will also sometimes stop, if you try to quit-skip the animation of the coin going into your inventory. In both cases, when the timer stops on you, you're forced to restart the puzzles from the beginning again. This screwed up so many runs that I changed the ending place of the segment. Now I talk to the goblin at the end, instead of quit-skipping the coin animation.

Another time where a 1 second improvement in real time saves 2 seconds in-game time.

So, yeah, lots of skipping here. If only there was a way to skip the harp puzzle...

Getting the keys here is tough. If two keys are overlapping, clicking on them is difficult. You've got a 50-50 chance that the game will ignore your click, and a 50-50 chance that it will assign the click to the wrong key. The difficulty is also increased, because there are two distinct types of purple keys and yellow keys. I got both types of purple here, but ideally, you'll get a board filled with lots of orange and blue, for quick, easy matches.

This is the hardest tile puzzle of the game, because it is five puzzles in one. It is easier to get the three middle pictures done first, but that's not the fastest solution, because that leaves you with a lot of swaps between the far left and far right puzzle, which means you constantly move your mouse all over the screen. It's fastest to work on all five puzzles at once.

The goblin-jong here was great; fourteen seconds faster than my second-best run. That more than makes up for the few mistakes with the beetles puzzle. Just like the two previous matching moving items puzzles, the game generally misinterprets your click if you click on overlapping things.

The only thing you need to worry about in this segment is doing the jigsaw puzzle quickly. Everything else is pretty simple. I included the cutscenes in this segment because hey, why not? We're at the end of the game, and they don't affect the timer!