This widely detested adaptation of Robert Zemeckis' time-travelling fantasy story arrived on the NES in September 1989. The unfortunate Marty has been sent back to a horrifying, alternate 1955 in which the world scrolls vertically and the only defence against hula hoop girls is a bowling ball. Can you help our hero get Back to the Future? 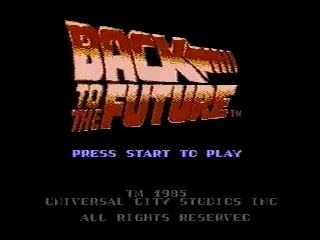 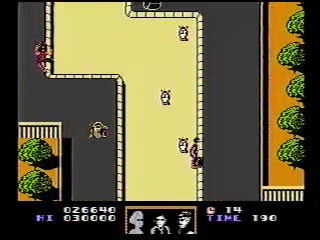 You're probably wondering why I bothered to run this game, considering how universally despised it is. There's really no reason other than I own it and I thought it would be easy. Since the main part of the game is essentially a vertically scrolling shmup (where you shoot bowling balls???), there's no need for route planning; just avoid obstacles until you reach the goal. However, when those obstacles include hula-hoop girls and bullies who shoot projectiles with random trajectories, along with really aggressive bees the size of Marty's head, I quickly learned that my work was definitely not cut out for me. This run took longer for me to finish than I had anticipated, but I had already passed the windmill so there was no quitting until the run was complete.

To achieve the fastest time, you need to grab the skateboard as soon as possible and not lose it, since traveling by skateboard is so much faster than walking. Every time Marty gets hit, he wastes several seconds throwing a tantrum, and, if he was riding the skateboard when the hit occurred, he's demoted to foot travel. So, like I said before, the main object is to simply avoid enemies and obstacles. The fastest possible time for the first scrolling stage (as indicated by the time remaining) is 68. For the next eleven, it's 116 each. After that, it's 109, 102, 102, and 102. I grabbed the skateboard as soon as possible, and I never got hit, so the time I spent in the scrolling stages cannot be improved. It took me many, many attempts to achieve this. I was at the point where if I finished a hitless run but failed at the DeLorean stage, I would've submitted it anyway. Luckily, in this run, I was able to send Marty back to the future.

For me, the hardest part about not getting hit in the scrolling stages is the bees (though that's not to say I didn't have runs ruined by every other possible object - especially when busy hot dogging to keep the run lively). I try to stick near the bottom of the screen so only one bee appears at a time. Starting in the 3rd stage after the school though, I stay at the absolute bottom of the screen. I could be imagining it, but the bees appear to be more blood thirsty at that point, and I need as much space as possible to react.

Other than the scrolling street stages, the game consists of four more parts: Lou's Cafe, the Classroom, the "Enchantment Under the Sea" Dance, and the DeLorean stage. First, in Lou's Cafe, you need to hit at least 50 bullies with milkshakes to advance. They appear randomly, except for a period in the middle when they repeat a "two on top, two on bottom" pattern. For the first ten or so bullies, I just throw milkshakes constantly and haphazardly, hoping to hit them as soon as they appear. I'm really just guessing at that point, although experience shows that they usually favor coming out from the top half of the screen. After that, they start arriving faster, so I let them appear first before I react. I'm not sure if it's possible to get a faster time in this stage. I'll assume it is. One second maybe?

Similarly, in the Classroom stage, you need to block hearts until the counter reaches 50. I accidentally blocked one more heart than required, which amounts to probably a half-second loss of time. It's hard keeping an eye on the counter and on Marty at the same time.

There's not much to say about the Dance stage other than I hit every note perfectly.

Finally, there's the DeLorean stage, where you steer the DeLorean around lightning bolts. The lightning is random and nearly impossible to dodge. If there's an easy way to do this without slowing down, I don't know it. I'm very fortunate I was able to drive without getting hit for so long. I'm even more fortunate that I was able to touch the wire at the same second I reached 88 mph. Pretty awesome finish, if I do say so myself.

Plus check out the boobs I give Marty right before hopping in the DeLorean.