Released by Data East in 1990, Bad Dudes is a thoughtful introspective on the journey to find one's self. Undoubtedly, players saw much of themselves in the game's protagonists, Striker and Blade, as they face the internal struggle to become bad enough as dudes to face the task of rescuing the president who has been abducted by ninjas. In the end, however, they find the badness was always within them, and while the burger they received as payment was fine compensation, the true reward was the journey itself and the personal growth they achieved on the way. 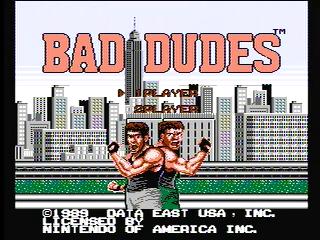 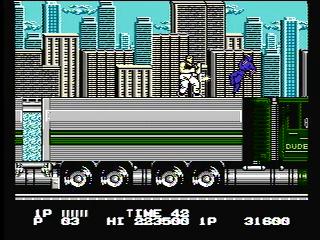 This video is proof that I am indeed a bad enough dude to rescue the president.

Jumping is always faster than walking by a significant amount.
The enemy spawns are based on where you are on the stage exactly, and spawn in waves. So killing off every enemy on screen allows a new wave to spawn, and therefore leaving 1-2 enemies alive can be beneficial.

Basic punches and kicks do 0.5 damage, jump kicks and weapon attacks do 1.0 damage, and charge up punches do 1.5 damage.
This game lags extremely badly with too many sprites on screen, so lag reduction is important.

In general, this game is about reduction of dumb stuff that makes you lose time. My commentary is pretty negative and points out a lot of mistakes and bad luck, but it's difficult to point to where things went right because basically it's any location where I get bad spawns or take damage I shouldn't. Overall, I had really good luck, getting favorable spawns, and the mistakes I did make were minor and I generally reacted to well.

Stage 1: Not much interesting here. This stage is really consistent other than Karnov dodging the first punch by breathing fire. He didn't do that this time so the run keeps going. I'M BAD!

Stage 2: Autoscroller. I keep the sword guy alive because as long as he is alive the game is only allowed to spawn 1 additional ninja, which completely removes the possibility of lag as long as none of the gray ninjas throw caltrops. I grab the nunchaku since they have better range than the knife and do the same damage. It's possible to get a 2-cycle kill on the boss here, but it's pretty rare and doesn't cost too much time. I'M BAD!

Stage 3: If any dwarfs or women spawn I have to kill them before moving on. If I don't, I have to wait for them to catch up to me before the boss will spawn. I got fairly lucky in that I didn't spawn any in a location where I had to stall in order to kill them. Boss went well, I make sure to use charge punches at the end of the first 2 cycles because it skips a cycle. I'M BAD!
Stage 4: I got very lucky just before the first screen scroll because normally an extra gray ninja spawns who I have to kill to advance. I forgot to jump down to prevent the very laggy spawns just before the boss, but it costs minimal time compared to the savings from the good spawns early. Boss was successfully backturn combo'd. I'M BAD!

Stage 5: I can't think of any way to make autoscrolling more entertaining than to jump alongside the train. I have to stop to grab the nunchaku, though. I once again manipulate sword ninjas to prevent lag, and in the process prevent zombie Karnov from spawning. The boss jumps over me an additional time compared to an ideal fight, which wastes about a second. I'M BAD!
Stage 6: I got above average spawn luck here, and managed to take little enough damage that I didn't have to grab the soda, saving a couple seconds of waiting for him get farther on screen, actually picking it up, and going to the right. I messed up the fight before the second screen scrolling a bit, but the position I need to be in after mitigates the loss a bit. Boss once again cooperated in getting combo'd even though he has no actual way to escape. I'M BAD!

Stage 7-1: Good spawns overall; usually this area lags a lot more. I missed a gray swordsman on the second screen scrolling and lost about another second or so. I didn't hit either of the glitch jumps to kill ninjas camping on the pipes, but I did manage to kill them off fast to save some lag time. The stage 4 boss re-fight looks sloppy, but considering how difficult it is to attack him while he's backing up I am satisfied with it.

Stage 7-2: Almost perfect boss re-fights. The stage 2 boss could be faster if he had dropped immediately instead of wandering on the top level for a bit, but it's almost impossible to successfully hit him with the charge punch if he does that. I once again mess up on the train boss, this time missing him with the first charge punch, but it's a very minor error since it just means he takes an extra hit. I mess up glitch-walking to the helicopter, but the screen scrolled fast so less than a half second was lost. I'M BAD!

And so the president was rescued from the clutches of the evil ninjas, and burgers were had by him. But no one else.