Released in 1990 by Tecmo, Bad News Baseball is unsurprisingly a Baseball simulation game where instead of using a league system, the objective is to defeat every single opposing team at least once. The game features 12 playable teams with different statistics such as Batting ability, Speed and Pitching power, and a Girls mode where all players are replaced with female sprites. 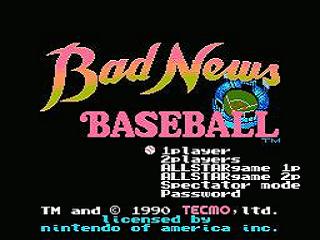 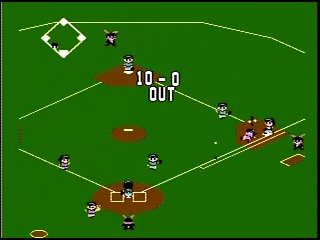 The basic strategy in speedrunning this game, and many other NES baseball games, is to quickly get 10 runs and win 10-0 after a minimum number of innings. This is because there is a mercy rule where if a team is up by 10 or more runs at the end of an inning, then the game immediately ends.

I am playing the All-Star Game mode with the girls teams. The girls players have generally better stats compared to the boys. The only other difference between the boys and the girls are the sprites. I pick a team full of all of the fastest players in the league. As my run comes on the third game of the three-game series that the all-star mode puts you through, the player selection process prior to the first game is not seen in the video.

I am the first to bat as the CPU is always forced to be the home team. I begin by abusing both pitching AI and the game physics to lay down bunt after bunt for base hits. This is a bit tricky to pull off as the success of the bunt is dependent on the horizontal position that the ball hits the bat. However, in this particular run, the CPU decides to start the same pitcher that threw in the previous game. This has a big impact as pitcher fatigure carries over between games. The slow pitches are much easier to bunt and are always hittable, whereas rested pitchers will randomly throw unhittable junk. From what I can tell, the CPU's pitcher selection at the beginning of the game is completely random and cannot be manipulated. Out of somewhere between 25-50 runs, this has only happened for me twice.

I make 1 mistake and get thrown out at first, but this is OK as I will need to get 3 outs to end the inning eventually anyways. Once I have my 10th run on base, I then abuse the bad fielding AI by taking extra bases to get the 10th run home as fast as possible. Once the 10th run is in, I then intentionally run myself out to end the inning immediately. I have to avoid a close play at home as a cut scene would play that would slow down the run.

Once I'm pitching, I intentionally let the CPU put the ball in play with its first two hitters. Most of the time, this is faster than striking the hitter out, but can be slower if they hit a high pop fly or get lucky and get on base. Their third hitter hits fairly often, so I instead decide to abuse the hitting AI and strike the CPU out on 3 pitches to end the run.

In summary, I face the minimum number of pitches on offense (the one and only time I've done this) and only pitch two over the maximum on defense. This run isn't quite optimal, but it's close. Since I can't reproduce the tired AI pitcher selection, this will have to do.

Thanks to:
- The Sunday Sequence Break for showing this run during the show, complete with cat gif from my stream at the end.
- Everyone who watched me run this game on my Twitch channel. It was a lot of fun to route this and in the end, I'm happy with the result.