Released on June 29, 1998, Banjo-Kazooie stars Banjo the bear and Kazooie the bird who sticks around in Banjo's backpack. Kazooie spits eggs, carries Banjo around, and dive bombs into walls while eating jiggies and getting transformed by Mumbo the shaman into a walrus, a pumpkin, and other oddities. Banjo & Kazooie set out on their journey because the evil witch Gruntilda has kidnapped Banjo's sister for use in her beauty-stealing machine. 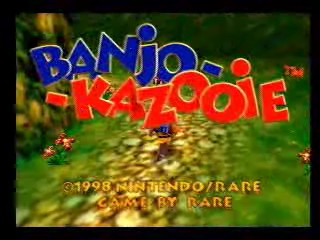 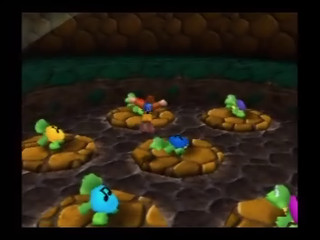 I've finally completed a run of Banjo Kazooie in less than 2 and a half hours! I'm very happy with the way it turned out and I hope that people use the run for entertainment as well as a guide for speed running the game.

I started doing runs of Banjo Kazooie a few years ago. Back then I did not have a good way to record and I used David Gibbons' run as a guide. I eventually gave up running the game because of my lack of recording abilities and I didn't play Banjo Kazooie again until I downloaded it on the XBLA. Leaderboards for speedrunning games have always interested me. I've been on top of leaderboards for several different games such as Resident Evil 5, Trauma Center New Blood and of course Banjo Kazooie. I started getting deeply into running the game when I spent months perfecting runs of each stage on the xbla version of the game. I eventually achieved my goal of becoming #1 on every leaderboard for the game. The two people who have passed me on the leaderboard are both hackers, and the times they've achieved are not realistically possible.

The last run that I submitted for Banjo Kazooie was rejected because I did not do the Ticker's Tower glitch where you can climb the tower without transforming into the termite. I did not know at the time that I was playing on version 1.1 of the game. To figure out which version of the game you have, look at the back and shine the game in a light. You can see two numbers imprinted on the back and possibly a letter after the two numbers. If there is not a letter than you have version 1.0 which means you can do the glitch. If you have a letter after the numbers then you cannot do the glitch because you have version 1.1.

Before I go into comments about the run I would like to take this opportunity to thank people. I would like to give a huge thanks to Heidrage for sending me his Banjo Kazooie cartridge. I was looking for a version 1.0 of the game and he kindly let me use his which saved me a lot of time and allowed me to do the run. If I never obtained a version 1.0 this run would never have been possible. I would also like to thank absolutely anyone from the SDA Forums who offered advice or helped me create the routes used in the run. I would also like to thank Mikwuyma and Nate for being patient with me throughout the verification process and for running speeddemosarchive.

I hope that everyone enjoys the run just as much as I did running it. :D

One of the best runs I've ever done through Spiral Mountain. I missed the first backflip but that trick does not work 100% of the time.

Almost perfect. I cannot think of anything that went wrong at all.

The fastest I've ever completed ttc. This is one of the most difficult stages in the game. It caused me to restart my run more than any other stage. Flying to get the jiggy in the treasure chest and the two jiggys near the final jinjo are the hardest. I did the part with leaky on my first try! The deathwarp is also semi luck based because you have to hope the crab is directly underneath the jiggy so you can skip the jiggy jig. I got very lucky in this stage.

I almost died when I was under water trying to free Clanker. Everything else in the stage went perfectly.

I fall off the first hut which didn't waste too much time. This stage is one of the most difficult and nerve racking stages in the game because of the small pathways and the vile minigame. If you fall off either pathway you basically have to start the speed run over and if you lose to vile you have to start over. I also barely beat vile by 1 point on the second and third battles.

This was the worst stage that I did. I missed the beak bomb to grab the jiggy out of the snowman's pipe and somehow hit the broom and fell to the bottom. I had trouble with the twinkly mini game and I couldn't hit the snowmen very well. I also came to within a split second of losing the race to boggy when I went to grab the jinjo behind the house. Everything else went virtually perfect.

I make a fatal error when I get rid of my turbo talon trot shoes before I grab the jiggy from grabba. I came up with getting the jiggy with the beak bomb on the spot. I knew it was risky but it was the only way that I could make up for the mistake. I die just after this stage on purpose to get my health back for mad monster mansion.

The gold feather trick to open the cellar and the barrels is something knew I came up with. I'm pretty sure it's faster than the standard way. Everything went virtually perfect throughout this stage.

The engine room is very scary. The run that I attempted before this one ended because I missed the jump on the spinning column to the left and I died. This time I did it perfectly. If you do the ground pound invincibility glitch, you can actually get through the fans without slowing them down. I get through the glass wall about as fast as humanly possible. The trick where I climb the slopes near the second crane by flutter jumping then rolling is a new trick that I made. I didn't think that I was going to do it all three times without messing up.

This is the fastest I've ever completed click clock wood. I had a terrible summer, but I made up for it with a decent winter.

I make the biggest mistake of the entire run when I tried to get the jiggy out of grunty's eye. Every other aspect of gruntilda's lair went perfectly. I even do the new trick where I backflip on the leaf just before click clock wood on my first try. I do this by using a dark spot on the ground as a marker.

This is by far the best run of the final battle I've ever done. I do not get the double health just before the battle because it's not needed. Every trick went perfectly and I do not even miss a single beak bomb. I could not have asked for a more perfect final battle!