This 2003 Rare Game Boy Advance platformer acts as both prequel and sequel to Banjo-Kazooie on the N64. In it players must collect Jiggies by performing various tasks in order to advance into new areas. You can also exchange musical notes for special moves. The plot has series antagonist Gruntilda occupy a new body to replace the one Banjo and Kazooie rendered unusable. Her plan is to separate the pals by manipulating their timelines. 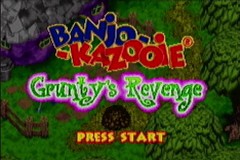 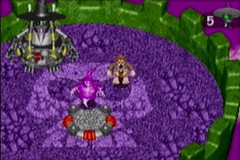 I've been speedrunning for about 2 years now, doing a wide variety of games, but the most important game to me has been Grunty's Revenge. The Banjo series means a lot to me, and while Kazooie and Tooie have been grinded and improved by many, Grunty's Revenge was left very unoptimized. I've been glad to give this underrated game the love and care it deserves.

The first speedrun I ever watched as a kid was the old Banjo-Kazooie 100% run by David 'marshmallow' Gibbons here on SDA, so it means so much to have a Banjo run of my own on this site. When I started running Grunty's Revenge, I didn't know where it would go, I didn't think I had enough skill to have any records. But now, I've accomplished this, and I couldn't be happier.

I would like to thank the four other people I'm aware of that have contributed to the route for this game:

Ryuto: Creator of a WIP 100% TAS back in 2010. You may recognize his name as the creator of the Brain Age TASes! He's made many others as well!

Burnedgoat: One of the original real-time runners and routers. His ancient 58:18 is the top result for "grunty's revenge speedrun" and that honestly annoys me. Maybe eventually this run will be instead? :P

Smasher32: The WR holder before I started running. He was a great help to me when I started running the game! He's also created many tutorials for Banjo-Kazooie, and is one of the most knowledgeable guys out there about it.

qqwref: Fellow Grunty's Revenge runner, creator of the Banjo series leaderboards, and my best friend. I would have never met him if I didn't decide to start running GR. <3

And now, level comments! I don't want to make it sound like a walkthrough or a guide or something, so I didn't go in-depth on every little thing or mistake.

Cliff Farm:
A lot can go wrong in Cliff Farm, but this was a really good one! I finished the sheep fishing minigame with 29 seconds left (usually I get around 24), the little chicks cooperated, and no enemies got in the way.
The only deathwarp in the route is at the end of the swimming section here. I collect a note in the water as I'm knocked back by my deathblow; multitasking!
I'm extremely happy with how this level went. It was a gold split for me.

Breegull Beach:
Everything here went great. The Grunty fight in particular was perfect. The biggest mistake I can think of is that I missed a bite as the rat, but that only costs a second or two.

Bad Magic Bayou:
Monster Manor/Klungo went well. But the training jiggy, not so much. I missed the first Gruntling... Literally had never done that before. Then I got knocked into the water crossing the bridge, ugh! Other than that, everything went fine.
My favorite trick of the run is on the way out of Vapor Scrubs. The swamp gas in this area damages you over time, and I use the slight damage boost from it to make a long jump across the tree stumps to the jiggy while staying in Talon Trot!

Spiller's Harbor:
Definitely the best song of the game here!
Learning Ice Eggs takes 410 notes, which is a very high requirement. I have a very precise route of what notes I get in each level; I end up at Ice Eggs with exactly 410!
The Grunty fight in this level can go very well or very poorly, mostly because of luck. Whether she moves up or down, left or right, it's all random, and you have to try to lead your shots where she'll end up being. In this run, it went about average. So, there's maybe 8 or so seconds to save there, the biggest possible timesave of anything in this run.

Freezing Furnace:
This level went basically perfectly, and was another gold split for me. I so very nearly failed the jump to the jiggy switch, I was so relieved when I didn't!
Like Hailfire Peaks at the end of Tooie, this fire/ice level is a very action-packed difficult end to the run, especially getting the gold pieces in Grunty Industries. It's way harder than it looks. Or, maybe, it's exactly as hard as it looks; doing blind jumps onto small islands surrounded by instant-death lava/goop looks plenty hard! But I didn't miss a beat, and finished off extremely strongly.

Final Boss:
This is where most runs die, purely due to luck. You have to answer 7 questions right in this game's Furnace Fun, but any of those 7 questions could randomly be a minigame instead, which wastes 30-60 seconds each. One or two minigames is the average. Luckily, getting zero minigames is not too rare, and this run got it!!
Most of phase 1 can be skipped using a damage boost onto the quiz area. The music disappeared for phase 2 because I got the Bad Magic Bayou "where is this?" question. I have no idea why that wipes the music, but it's creepy as hell.
I messed up and got hit during the final phase in a stupid way, but luckily one of Klungo's minions dropped 2 health before, so I didn't die! So lucky!

Game time continues to increase during the cutscene after the boss, as well as during the credits slide, which means hitting oil slicks increases your game time. So, we go by real time. Even so, I got sub 50 game time; nice~

So much went right and so little went wrong in this run, it was totally what I was aiming for. My sum of best is only 10 seconds better. When I dealt the final Pack Whack to Grunty, and it was done, I felt a feeling of happiness/bliss that I've never felt before. I'm so proud of it.

Hopefully you enjoy(ed) my run as much as I enjoyed achieving it! And if you're interested in running it yourself, hit me up, I'll help in any way I can!