Released in Japan in 1988 and North America in 1989, The Battle of Olympus is a side-scrolling action-adventure game developed by Infinity. You take the role of Orpheus, who must earn the favour of the Greek pantheon as he attempts to rescue his love Helene, whom was kidnapped by Hades in order for him to make her his bride. The game allows you to upgrade your weapon as you progress and pits you against a variety of mythological creatures. 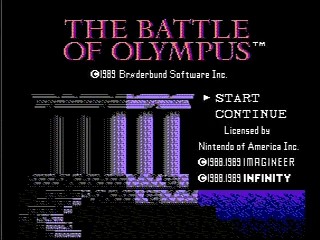 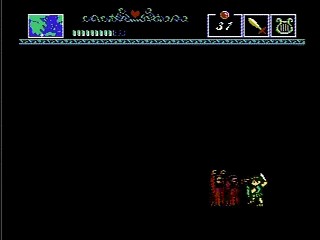 OLIVES. OLIVES. OLIVES. OLIVES. OH GOD THE OLIVES. Most of the reason this game can stink to speedrun is the olive luck. It's UGLY. Even with the trick I use for fast olive farming, getting the number of olives I need can vary by up to a minute each time I farm.

For the items I need in this run, I have to farm 130 olives total. 60 olives for the ocarina, and 70 for the divine sword. I like to divide up the farming for this route to be 45-45-40. The best farming screen in the game happens to be in a location that's set up well for this, and the reason I don't farm more at once is because once you reach around 50-60 olives, the olive rates seem to decrease substantially. You can make them drop more often again by leaving and coming back, but it's much faster to just get them in smaller groups.

The farming works a lot like how Rygar enemies spawn, and a huge thanks to Breakdown for his brief explanation. A HUGE part of getting this run for me was just learning this trick and mastering it. The trick basically works by killing all the slimes, and then making them respawn on top of each other by moving in a particular way. Once you get them in a clump, you can kill 6 slimes in a single swing, making for a very fast farm (relative to any other location in the game except maybe the salamander pit if you have the divine sword and bracelet).

Also, this run uses crouching projectiles a little bit. It's a bit harder than it looks, but once you get it down, the main challenge is to pull it off consistently. If you hold down, press attack and then quickly press up, you can shoot a projectile from the ground. (The normal combination for shooting is up+b). Another thing worth noting is that the divine sword's lightning takes half a bar of health to shoot (until you find the bracelet, which I do not take in this run.

Farm 45 olives.
Talk to Zeus.
Go to Hermes' temple in Argolis and get told to buzz off.
Farm 45 olives.
Talk to Hermes in Zeus' temple.
Using a damage boost to get through the brown plant in the forest, kill the hydra and get the sword.
Get the harp.
Get the ambrosia and kill the Cyclops.
Talk to greedy god #1 and spend 60 olives on ocarina.
Kill harpy, and get the orb from the mini boss fight (yes, in the dark).
Use the harp to get back to Arcadia and farm 40 more olives (or until 70 olives).
Go to Argolis and get first love fragment.
Harp out to Attica.
Fill flask in fountain and get key.
Go to stone golem and kill him to move to Phthia.
Talk to greedy god #2 and spend 70 olives on divine sword.
Get ambrosia for free health refill.
Go into high waterfall door to get second love fragment.
Harp to Laconia.
Go to Crete, fill flask if necessary.
Kill minotaur for final love fragment.
TARTARUS AND HADES' PALACE
CROUCHING LIGHTNING, HIDDEN VICTORY

Comments on the run in general -

The first farming segment goes very well - I clock in about 30 seconds faster than my average time when talking to Zeus. Normally I like to talk to him with 45 olives at around the 3:30 mark.

In my trip to Argolis to talk to the absent Hermes, I have a bit of bad bat luck which doesn't cost much time, but it does look a little unprofessional. :(

My second farming segment goes okay. I lose about 20 seconds here from my previous farm, but my previous run had amazing olive luck in this segment so I couldn't complain here. I like to be talking to Hermes (now located in Zeus' temple) by the 9:00 mark. In the interest of not wasting too much time, I run to Hermes with one less olive than I plan.

In the forest, the enemies mostly cooperates with me. The hydra makes a couple of jerk jumps, but nothing too costly. After getting the harp, a web trolls me. I make up for this by nailing the Cyclops fight, though. :)

Laconia's entrance goes well with only one hit from a scorpion. Laconia is irritating, much like any location with birds. Harpy and orb fights go surprisingly well, too!

Final farming segment and I'm a bit angry. This segment seems to always give me bad luck and feel like it's taking forever, and it really shows in my splits. I lose a good amount of time here. Oh well, it's beyond my control.

With the first love fragment in hand, it's time for

Satyrs troll me on the way over a bit. Nothing too terrible, but it does rustle my jimmies a bit. I also mess up the second to last hit on the rock golem fight, forcing myself to take a good amount of damage and waste about 8 seconds going back up.

Safe strats in Phthia! Yes, they do exist! The places I jump and wait are pretty thoroughly planned out to make for the most consistency.

On the way to the ambrosia, a bird spawns in a location that I can't dodge, so I have to reset the screen. Probably costs me about 10 seconds. I make sure to moonwalk up the stairs for style points. VERIFIERS, YOU KNOW YOU LOVE IT. The centaur trolls me a bit as usual, but I save a lot of time on this segment from my previous best by not dying!

I find myself a bit indecisive on my way to Crete if I want to use my flask or not. I hold it out just in case.

Minotaur fight goes just about perfectly, but I get hit a lot before the fight leaving me with very little health. This makes for a very unnerving Cerberus fight. I can't use my flask because I need it for the end of the run.

Cerberus is nice, though, and Tartarus goes well. There are a couple of rooms that are pretty luck based in terms of whether I survive or not, and things go in my favor. :)

A snake hits me in Hades' palace that isn't supposed to, so I take a little time to kill it before it causes me any more trouble.

My actual fight with Hades is a little sloppy. If you watch my live recording, you'll hear me taking very deep breaths. I misfire a couple shots of lightning, and a few of them are poorly timed. In the end, Hades falls and BUG saves BOX.

In the end, if someone wants to grind out better olive luck and get perfect execution, I think they could get just under 30 minutes. I'm drained on olive farming, though. I hope this run is as satisfying to watch for you as it was to get for me.

Shoutouts:
Breakdown - THANK YOU for all the work you put into this. If it weren't for your topic I wouldn't have bothered to learn this game. Wait a minute, does that mean I should curse you instead? Either way, your discussion of this game was incredibly helpful, and so were your passwords. I used them a lot. :)

GLuB, Feasel, Darkwing Duck - Pressuring me into speedrunning this and pointing out Breakdown's topic! Also, GLuB encouraged me to give this game a shot in the first place! JUMP SWING DUCK SWING!

PresJPolk and Chaide - for entertaining me with casual playthroughs when the speedrun became too much to bear at times. Also, don't mention Phthia around Pres. He suffers from Phthia Traumatic Stress Disorder. :(

Crippe - The races I had with you were really fun! I hope you master the endgame so we can race the entire game some time. :)

All my stream viewers - for supporting me during 4 months of resetting due to bad olive luck. T_T

Angiebug - for saving me from Hades after I was bitten by a poisonous snake and taken to Tartarus. <3