Released in March 2010, Battlefield: Bad Company 2 is a first-person shooter developed by EA Digital Illusions. Like the rest of the Battlefield series, it is primarily a multiplayer game. However, a single-player campaign is also available and follows Preston Marlowe, the protagonist of the original game. 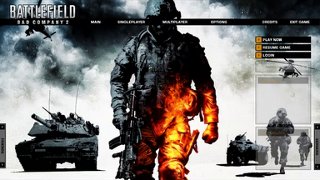 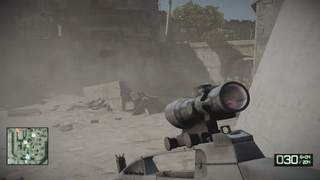 Released in 5th March 2010 for XboX360, PlayStation 3 and PC. Game considered by most of players as just a Bad Company and not a Battlefield, because of non-battlefield multiplayer mode experiences. However it's first Battlefield game for PC with single-player campaign that has some kind of storyline. Bad Company 2 uses upgraded "Destruction 2.0" engine, that allows players to destroy almost everything with enough firepower, even to collapse whole buildings.

What can I say, just an another console game ported to PC... well... TERRIBLY BAD. Even main menu looks strange as for PC game. I won't mention the hardware requirements. This game is unplayable on processors with less than 4 cores, mouse movements just won't be smooth (so probably they won't be accurate to) without at least 4 cores, even on high fps. Sometimes random crashes, and sometimes crashes because of skipping the cut-scene too fast after restarting a map, or because of dying right before or during cut-scene etc. etc.

OK but about the game itself. It's little bit better than you could expect, after reading the previous part, there are not so many bugs that affect on game-play, and some of them can actually help. For example it's possible to skip last part of reload animation, by changing weapon to another one and than other way, right after ammo count will update, with LMGs you can save about 2sec that way.

"Destruction 2.0" engine - I love it, there is no straight way through the level? why don't you try to run through walls? Did you forget to take your 40mm grenade launcher with you? Or maybe you need something bigger? No problem, here we go, a brand new rocket launcher, and now you can go anywhere you want! M2 Carl Gustav - makes better future, with no walls!

Whole thing about speedruning this game is to avoid fighting, and the best way to do this, is to run the ways where bots won't see you, or try to run right through them, last thing to do is killing, because it takes too much time(such a pacifistic way to complete the game), so there are lot of places where the fastest way to reach next objective is to run near battle-zone boarder, far away from the enemy. There are few kinds of objectives in this game the worse one is to kill someone or to kill some more people. Another one is to go to the place, usually small imagined square(or cube) that you have to get in, or to reach some kind of thing(crate, computer etc.), it can be done by standing near the objective for few seconds, sometimes activate key has to be pressed. Next one is to proceed somewhere, most likely it's long(or infinite) imagined line that has to be passed through even being outside of the combat zone. Sometimes there are combinations of those types.

Configuration files:
Settings I was using to do this run are exactly the same I use on-line, after all these hours I spent playing this game, it was the most comfortable choice for me, and I don't care about ESL rules, I play only in CB (lolz).
So... Settings.ini: basically everything is set to low, with terrain and details on medium (because of bugs that can occur on low), forced dx9, RenderAheadLimit set to 0(in graphic driver too, why should I be 5 frames behind the game, huh?), Fov set to 80 with aspect ratio 16:10 my real in-game fov is about 110, Speaker count forced to 6(headphones 5.1 :D).
GameSettings.ini: DialogueVolume is 0.0 with SoundSystemSize=0 and last one from settings.ini I can hear footsteps perfectly clear and loud, ToggleCrouch=0 well I get used to it, because I started to play this game right with beta version release, and this option came out with last patch, sensitivities are set the way that fully disables accelerations(I won't past here this because of the amount of commands), contrast and brightness both set to 0.25.
land.dbx, air.dbx, infantry.dbx - everything there is set to make the mouse sensitivity independently adjustable for each type of vehicle, by default every of those are connected to each other(you will rise all of them or nothing) and sensitivity in tank is like 1kk times too low. (scary extension isn't it? notepad is enough)

Bots:
That's a really funny part, at the beginning it feels like they act randomly, but after playing the same map like 236th time(sangre del toro for example) it appears they just react to every, even smallest move. In addition there are few types of reaction for same move or it's just bugged(more likely), but it doesn't matter, because If you come to close to the enemy, you will die with one hit in most of situations. And most likely, if you pass through horde of enemy, they can still kill you with one hit, even if you're 100 miles away, sometimes you just have to wait one or two seconds and try not to make bots angry with running too fast.

Shooting:
All weapons have basic spread while no-zoomed, and almost no spread while zoomed, after shooting 4 or 5 bullets, it's just a lottery where the next one will hit, can be anywhere inside the crosshair, while zoomed it's still lottery but there is bigger chance to win, just a random recoil. However, this game offers pretty realistic ballistic model, so for extreme long distances it's necessary to aim above target, and spend more bullets to kill an opponent.

Operation Aurora:
Very annoying map, because of about 4 min long unskippable intro movie, and long part with disabled sprint option. In addition the whole map is like push forward, invisible walls around the route. Only one thing here is jump over fence to reach the car.

Cold War:
First real map, maybe it's not so long but it's one of the hardest in the game, and it's only because run to the truck after calling airstrike, it depends much on luck I was trying to do this one about 50 time or so. I don't think there is a way to do it faster but... who knows.

Heart Of Darkness:
First fight is pretty hard, I focused on getting T88 and than kill everyone left(could be done faster but fighting in this game is hard, bots react every time little bit different), second fight(the one in river) is done quite well, and than just a run, and big shame at the last 20 seconds of the map 3little mistakes in a row.

Upriver:
This one was pure fun for me, sniper part went just good (last thunder in perfect moment), T88 could be nearer the optimal way but ok, short unskippable movie, than jump over tripwires and run. Fighting in river could be better(I wanted to do it too fast) but it's not big loss of time up to 3 seconds, next objective is to kill 3 guys at the far end of the village, and than run. I've decided to clear the area around stationary MG, because I died lot of times there trying only to run through there. Everything went good, but unlucky weapon pick up, after destroying Vodnik, and killing the kidnapper(he acted like never before).

Crack The Sky:
About 2 minutes long Blackhawk part at the start, that can't really be done faster. Run to the satellite control station can be done without killing anyone, like ThomasDollar did in his run, but I really can't do it his way. Rest of the level went pretty well, only 2 small mistakes, block at way to the car, and crash with wreck of one car.

Snowblind:
Another well done level. Defending the satellite wreck was almost perfect. Run to the second house was just bad and stupid. Rest of the level is pretty simple and done without bigger mistakes.

Heavy Metal:
Simple and easy, but long... one terribly bad mistake while clearing UAV spot. And nice shortcut at the and of the level.

High Value Target:
I have nothing to say... as I write everywhere LAME MAP.

Sangre Del Toro:
Probably the hardest, longest, most bugged and annoying map in the game.

Route to the 1st of 3 objectives: I've skipped almost everything here. I reached the place, using way, that supposed to be the way back from the objective. To get through, you need to take down both hinds. The first one is not a problem, but the other one is bit bugged after taking the first so fast. I didn't try to hit it at the beginning because, it's life restores after location-jump bug (reset bug/whatever you will call it). |to take down helicopter with one shot you need to hit the pilot window|.
Route to the 2nd objective: normal way, but skipped most of fights, I threw the grenade just bad it cost about 2-3 seconds.
Route to the 3rd objective: most of it is just a run, but if you wonder why I was running into hill, right after jumping over the barricade... it's because I was timing the sniper shots, running straight through this place in 90% of attempts was ended with dead. Rest of the map is quite simple i think there is no comment needed to it...

No One Gets Left Behind:
Don't get confused, this map is not so long, there is just almost 4min Blackhawk part at the end of the level, that you cannot speed up. In addition at the beginning of the level you have to kill all the attackers, and the worst thing is you can't walk into their spawn, because if you move to far from the houses during first attack wave you will just die :D after destroying BDM and before Blackhawk the level is just about run, and the CG makes it really easy, because you can destroy almost everything to make your way shorter.

Zero Dark Thirty:
Pretty hard level (IMO), I don't have much too say, just a lucky run through tons of enemy. Basically, I used ThomasDollar route.

Force Multiplier:
Short easy level... I don't know what can I say, there are no shortcuts in this one, it's a straight way surrounded be invisible walls...

Airborne:
And another level where it's impossible to skip anything. I lamed with that last two guys near the cockpit, and I would redo this level if not a nice bug that occurred after killing Kirilenko. Usually I had to wait like 15 seconds for the last vid after killing him.