Released by Rare in 1993, Battletoads and Double Dragon: The Ultimate Team, as the title suggest, takes the characters from the Double Dragon and Battletoads games, and puts them together in one adventure. The Dark Queen and the Shadow Boss have teamed up for a plan to conquer the world and only the Lee brothers and the trio of mutated toads are equipped to stop them. 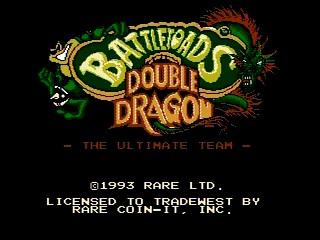 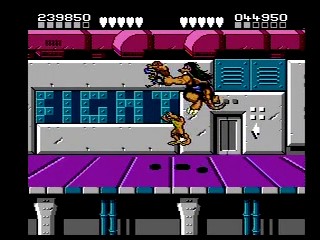 Timing note: The in-game timer is not used because it is inaccurate.

Thanks as always to the SDA crew (Flip, puwexil, breakdown, mikwuyma, Vorpal, ShadowWraith, moooh, dex, etc) for keeping everything running smoothly. A special big thanks to nate for handling the technical side of things for us. ^_^

I'm going to try to keep these comments short, but I will probably fail. Battletoads & Double Dragon is possibly the most fun co-op game on the NES because it is a glitchy mess. When played co-op, it is even more of a glitchy mess than ever. Very fortunate! Anyways, this whole thing began when Mecha Richter and I suggested this game co-op for AGDQ2013. We played it for bonus stream at the previous AGDQ and decided it needed to happen. We really didn't even plan to do a serious run of this because of how ridiculously hard it to complete optimally with one credit. We were just planning the marathon run. At AGDQ though, after our marathon run and on Mecha's last day at the 4H Center, we decided to give it a few tries. LIke an hour later, we got this gem of a run.

This is our second ever 1cc without the lives code I think. Despite having a good deal of sloppiness, it is a rather good run still, especially considering the circumstances in which we recorded this (also, shoutouts to Golden for almost ending this run by trying to unplug some cables nearby; we were using my cables which are so shitty that they can't be plugged in fully if you want them to work, so any disturbance usually causes them to power off). There are a lot of improvements that we are aware of (adding more pitjumps to level 3, for instance), but chose to omit for the sake of completing a run. I'm sure we'll eventually work on improving this.

There are a lot of technical tricks and bugs that make this game really fun to play and really possible to speed run. Without most of these, it would be an incredibly tedious run. Instead of listing all of the tricks, I'm just going to highlight the most important tricks.

-Dash jumping. I mention this in more detail in the audio commentary (listen to that, btw. good stuff in there), but the basic approach is to do the dash input before your character leaves the ground. Pimple and Bimmy have a lot of hesitation before they leave the ground so it is easiest with them. With one of the green toads you have a 1-frame window to do this. Since it is required absolutely everywhere, it is better to just go with the more consistent characters. Anyways, the trick lets us carry dash status into the air, which lets use the dash attacks or finishers in the air. Mad good.

-Air finishers. If you press the attack button while near something that is in critical state during a dash jump, you will do a finisher in the air. In more simple terms, you can wind up the boot in the air and kick something that is very alive or very far away. The easiest way to do this is with capsules that are in the air (see stage 2), but you can also do it with an enemy that was very recently hit or an enemy on the ground. Finishers will always kill what they hit (except Big Blag) so it is a great method for killing bulky enemies like the level 2 thugs.

-Megathrow. While carrying an enemy/partner, you normally can't run or do any attack. If you dash jump though, you will resume running while landing. More importantly, you can hit the enemy you're holding with a dash attack. This is slower than just normally hitting an enemy, but there's a neat catch: if the enemy/player you pick up was lying on the ground, the dash attack will be a finisher instead. The finisher can be redirected if you are really really good at spacing it (see the Big Blag kill and the first room of 6-1). I think theoretically I can pick up Mecha Richter in 2-1 and use his corpse to OHKO every enemy. The spacing is significantly harder than our route, though.

-Ladderdash. Some general idea as dash jumping, but instead of jumping you climb a ladder. This is really tricky to do when climbing a ladder upwards. I missed a critical ladderdash in 3-2, unfortunately. Sometimes ladderdashes cause you to slip through the background and trigger a game over loop (stage 3) or plane shift and enter a parallel gravityless world (level 5), so it's a bit dangerous.

More or less everything we use in this run is some combination of the above tricks.

I could go into excrucitating details about each level and what mistakes we made, where we can improve, etc, but we covered a lot of that in the audio commentary. I'll just summarize this run with a few points:

Overall, I'm super happy with how this turned out. I'm amazed we were able to get ANY recorded run, let alone one that is this good. We can definitely drop the time below 23 minutes (probably even like a 22:15 or so if we succeed in using the most optimal strats), but I don't know when we'll get a chance to try. I hope you all enjoy this run as much as we enjoyed making it!

There isn't much that I can say that PJ hasn't already covered or what's in the audio commentary. Both explain the run very well.

I guess I can just give some shout outs instead. Thanks to all the SDA crew that keeps the site going. Big thanks to feos who was very supportive of our practice going into AGDQ. We used a ton of glitches he discovered or made aware of during out AGDQ run which made for a very entertaining watch.

The biggest thanks of all goes to PJ for running this with me. This is by far the most fun I ever had playing a game and speed running it at that. To think this might not have ever happened if he didn't suggest playing this co-op during the AGDQ 2012 bonus stream.