Battletoads in Battlemaniacs was released in 1994 exclusively for the Super Nintendo. Like all other Battletoads games, plot is irrelevant. The player guides either Pimple or Rash in his quest through cyberspace to save Zitz and some damsel in distress, riding cool vehicles and destroying everything in his path along the way. Also, autoscrollers. 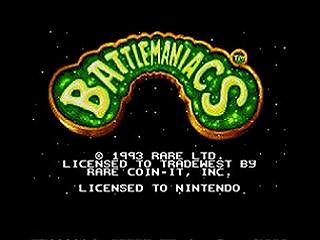 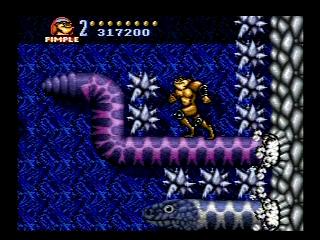 Thanks to the SDA crew (Flip, puwexil, breakdown, mikwuyma, Vorpal, moooh, dex, etc) for keeping everything running smoothly so we can continue to waste time by doing speed runs. A special big thanks to nate for handling all the videos and dealing with idiots like me who probably submit incorrectly-encoded runs. :P

Battletoads in Battlemaniacs is a really fun game. Unfortunately, a lot of the fun is lost during the speed run process. This game consists of 8 levels (two of which are bonus levels), a final boss fight, and a UFO-shooting segment. Every level except for the first and last level is an autoscroller. Therefore, a run of this game requires being as perfect as possible where it counts. I more or less view this game as a 5 minute long run with a very long cutscene in the middle. Haha.

My previous best time for this game was 20:35, but I didn't submit that because the video quality was too poor (I recorded that run back before I knew anything about video capture). I was always hesitant to improve that run because I thought it was pretty great and because the first level is an absolute nightmare to run. Eventually I realized that it had to be done and I returned to improve that run by a whopping 39 seconds! Most of the time saved is on the last level and the dark queen fight, but I managed to save time on every level.

A quick note: I use Pimple for this run because I like Pimple. Rash (is that the other toad?) has a faster foot speed, but I think his attacks are slower or something. I don't know to be honest. I do know that I recorded a run of the first stage as Rash and I lost time when compared with Pimple. Considering that the rest of the game is autoscrolling, foot speed wouldn't make a difference at all. It is possible that Rash is faster, but I have trouble dealing with his hitboxes and I simply like Pimple more. If he is faster, it wouldn't be by much.

The enemy grouping and strategies that you see here are the result of many many weeks of trials over the years. The only other resource available for this game is the 2-player TAS, which doesn't really help in a single player run. I think that my approach to this level is the fastest. I try to use the double punch thing as much as possible when there are two enemies, and I try to use only the fastest finishers whenever I can. I am particularly proud of how I handle the pair of pigs after the first bridge, and how I handle the canyon encounters. Those are both pretty annoying enemy groups to deal with, but I think my strategy works really well.

The boss can be done quicker if you simply attack quicker. Haha. You need to hit the very edge of his hitbox so you can just stand in the middle of his two positions and just change directions. It's super tricky to do because sometimes you do an autodash after the hammerfist and ruin your spacing. I choose this safe and fast method to the fight even though it is maybe 1.5 seconds slower than an optimal fight. I had a perfect level other than that (I even got a fast drop on the last flying black pig!) and didn't want to ruin it. This run came after 108 attempts in one night; 5 of those made it past level 1. I simply wanted to move on. Haha.

This is the worst level of the run. There is one major mistake. The beedrill in the second group of 8 decided to sting me really early. It's not uncommon for him to sting me before I reach the left side, but it normally happens a lot farther to the left. As a result, I got flustered and missed the first hoverpad attack. :( I also missed the 1up from that bee. Disgraceful. I had some issues fighting the green snake head things, but I had really great luck on others. Not sure how that averages out. Overall, I lost about 3 seconds here compared to my best.

I'd just like to say that I'm very proud of my electrobot strategy at the end. Hitting them into their own electricity is incredibly efficient Suicide at the end because, hey why not? I already died once so I can't claim deathless. Haha. I abuse the invincibility to get to the bottom of the screen and trigger the end quicker.

Ok so these bonus levels are pretty dumb. They're fun for casual play, but they suck when you just want to end the game. This one in particular is bad. The level will end either when you reach the end or when you die. However, nothing damages you except for the black bowling pins (or dominoes in the second bonus). These don't appear until the very end of this level so I have to wait around and try to make it entertaining for you all. I died as soon as possible when I had the chance, so this was fine.

YEHS! I really like this level. A lot. This is what NES Battletoads' Turbo Tunnels should've been like. This is challenging even after learning the course, and each checkpoint has new things to offer. I try to make this as entertaining as I can by making dangerous jumps and moving around a whole bunch; I at least made it fun for myself! Haha. This level is one of the main reasons I like the game so much.

Obligatory snake level. This is a pretty uneventful stage. I still somehow enjoy it because it actually has some degree of difficulty compared to the NES version. The snakes' patterns and spawns are all completely fixed so there's nothing I can do to speed it up. I just have to reach the exit as soon as it is possible.

This run has no hesitation on the jump at the end of the third snake level. My old run took a practice jump to line up the jump over the spikes, but it costs time to do so.

This level also features the only "warp" of the run. If you stand on the tail of the last snake in the final area and let yourself fall, the level ends. Not sure why, but it does.

This is my favorite level. The music is catchy and the level is just fun! It is way more interesting that NES Clinger Winger. Again, this level is incredibly hard until you learn the course, but after that point it presents no real challenge. I have a pretty below average run of it, but it doesn't matter. The rat will finish the course in the same amount of time every time, so as long as you don't lose the race, you will get the best time.

Second biggest mistake of the run. I miss a domino in the first row and I'm forced to collect on in the third row. I hadn't messed that up in several tries at the level, so I'm not happy that I missed it here. I lose just under one second as a result, but it just looks awful.

This is where the run really shines. This is my fastest ever run of this level by 1.4 seconds. I briefly catch the last ledge of the first checkpoint, but I blow through the rest of the level. This is essentially a perfect level. I barely even touch solid ground except when I have to; I am in free fall for most of the level. For some reason, the TAS is able to fall faster than my terminal velocity but I think that is an artifact of being a 2P run.

This fight needs a bit of explanation. In a single player run, Dark Queen can only be hit once per cycle unless she is on one of the upper platforms. You can hit her twice in one cycle on the ground only if you have invincibility from respawn or something, but in the process of setting up that situation you lose time (I was using that strategy before I actually timed it). Also, as Dark Queen gets damaged, she idles in each location for a shorter period of time. As a result, you can no longer hit her twice in the upper platforms after a certain point. What all of this means is that there is some degree of flexibility to this fight. Even if I miss 1-2 hits during this fight, I can still get the same exact time because I'll be able to hit her twice on a platform where I'd normally only be able to hit her once at that point in the fight.

It's hard to explain. Just take my word for it: the fastest Dark Queen fight will kill her in the upper right. I get hit twice in this battle and still kill her there because I got an extra hit on her where I normally wouldn't be able to.

This is, hands down, the worst possible way to end a speed run. First off, I'll give a bit of backstory.

The day before I completed this, I got a 20:02 run which had basically perfect execution for the entire run. No mistakes at all...until this part. I missed the last missile shot and lost exactly 3 seconds. In this run (19:56), I don't miss any missile shot, but I gain 7.3 seconds on this section. The other 4.3 seconds comes from text. For some reason, the Dark Queen's dialogue disappears like 3 seconds faster in my new run, even though I always mash every button during this section; Professor T-Bird has a shorter monologue too, which saves additional time. It takes 3 frames for each character to appear, so 20 characters = extra second. The 20:02 had 5 full lines of text. So yes, not only do you need to hit the UFO, but you also need good dialogue RNG. :|

The final missile shot has a 4-frame window. Doesn't seem bad until you realize this is actually an intended part of the game. Haha. Also, my television can't display the crosshairs, so I need to just blindly guess at that missile. Fortunately I got it and had godly dialogue luck in this run, otherwise I would've destroyed the world. Or my cart. Either or.

This run is really, really good. The 2-player TAS of this game clocks in around 62 seconds faster than this run. It gains 35 seconds on the Dark Queen fight alone using strategies that are not possible single player, and it gains more time from faster combat in level 2 (and level 1 boss) and the fast fall exploit in rat race. My run has 4-5 seconds of error in it, but has incredible luck with dialogue at the end. With my current strategies, a 19:50 might be possible. I will definitely not go for it, though. I am more than happy with this run and I can finally put my mind at ease. I hope you all enjoy this as much as I do!