Released in June 1989, Adventures of Bayou Billy is probably best known as "the game that kicks your ass in the first stage" and being obviously influenced by Crocodile Dundee. As Billy West, you have to save your girlfriend, Annabelle Lane, from the evil clutches of Gordon so you can get into a hot, 8-bit make-out session with her. 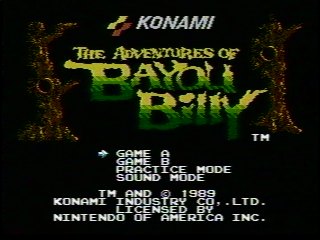 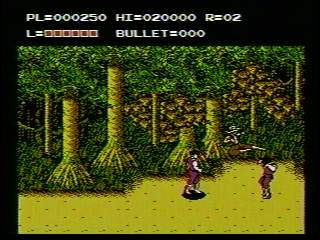 Despite what everyone thinks about this game's difficulty, I happen to really enjoy it. Maybe I'm just a sucker for punishment, I guess. Or perhaps I just like it because I was a big "Crocodile Dundee" fan and Billy looks a lot like him. :)

Seriously, I've known how to beat this game for about 15 years and some of my friends recently asked me how to do it. This was the best way I could think of to explain it.

My main goal here was to pull off a zero-death run, which I managed to do after a few tries. Going for speed made a few stages difficult though, particularly the driving levels. I usually take my time on those, since it's so easy to crash. It's important to get through the driving levels without dying so that you can carry over your weapon from Stage 3 to Stage 6. Having a weapon there works wonders!