Released in 1994, Beavis and Butthead for the Sega Genesis is an appropriately obscene puzzler centered about the world of the Mike Judge TV show, and directly mimicks some of its earliest plotlines. Both characters can be selected, and a two-player coop mode is available. The game is often considered quite difficult due to the overwhelming lack of direction in the title, but it preserves very well the idiotic entertainment found in its silver screen counterpart. In the game, the title characters search for missing concert ticket pieces scattered about their local neighborhood. 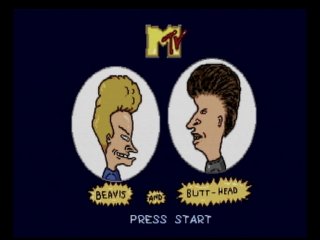 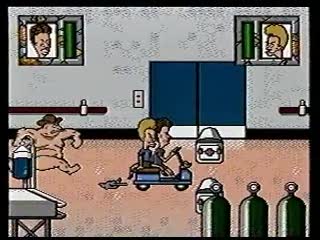 Note: Only 100% runs are accepted (best ending) because the difference between that and an any% run is too small.

This is my first submission to SDA, though it is certainly not my first speed run. Back when the Sega Genesis was state-of-the-art, I would keep track of my times in an extra notebook from elementary school and try to beat them each time I played. I discovered the Twin Galaxies scoreboard a few years back, which eventually led me to here. Thanks go out to Mike, Nate, and the gang for maintaining such an awesome web site.

There are two endings to this game and here I finish with the better, longer ending. This run is an improvement of InsipidMuckyWater's 12:41 shorter ending run from 2005. I picked up a few tips from his run, so thanks go out to InsipidMuckyWater for providing his run previously on SDA. My run uses the same route, but saves time mainly through spending less time at home at by taking more damage to speed through enemies. Finally, just as in the previous run, pretty much all of the damage taken from the various goons is intentional as it is way to slow to stop and kill them all.

Street: Not the greatest street run in the world. I get caught up on a few places that cost me seconds here and there, plus I fire a couple of shots in the wrong direction from Mr. Anderson. However, I don't like reseting a run in general unless I die or make a severe mistake. Not really a good speed running mindset, I know. I deem none of the mistakes here severe and carry on playing.

Burger World: I was actually too fast for my own good when trying to give the guy the rat-fries as I hit start before the dialog came up. That cost me maybe a second. And yes, Beavis, I know that you guys are sick.

Highland Highschool: I mistimed a few of the skateboard jumps, which slow me down ever so slightly. Also, I switch to Butt-head after picking up the gum for no real reason other than to try to balance the health out a bit. I'm not sure that this was necessary though.

Home: I first couch fish with the gum to get the ticket piece. Then, I grab the pizza from the sofa cushion and fish again immediately to get the cat. I figure that doing the fishing all at once saves time by not having to switch to the fishing rod weapon later on. Also, I leave the cat on the ground so it doesn't take up room in the inventory. It isn't needed until the last stage anyways.

Turbo Mall 2000: I miss picking up the bird cage key right away somehow, so that costs me about a half a second or so. Because Butt-head is now holding the scissors and his inventory is maxed out, I have to switch to Beavis to grab the soap. Finally, I take the hits from the 3 security guards on the way to the exit as I have plenty of health left.

Drive-In: I mistakenly switch to Butt-head and back to Beavis before entering, which is probably the sloppiest part of the entire run. The water jumping part goes pretty well though. I make it out with just enough health.

Home: Grab the tickets and the cat, and let's get to the concert.

GWAR Concert: I try to switch too early a few times here, which hurts the time a little. In addition, I finally have to spend some time killing two of the thugs on my way to the back stage. For my route, it is 100% necessary to kill somebody at some point for some health. I wait until here to do it because I can shoot two guys at once, plus they don't get pushed off the screen by the toy gun like all the other enemies do. The two health drops are just enough to run through the rest of the stage and complete the game the hard way.