Released in 1995, Bermuda Syndrome is a PC adventure game similar to Flashback and Another World/Out of This World. The game features lush, beautiful scenery, and adventure-game style puzzles along with platforming. The plot features a WW2 bomber pilot getting sucked into a portal to another dimension, where his crashing plane suddenly decapitates a T-Rex about to devour a sacrificed princess. 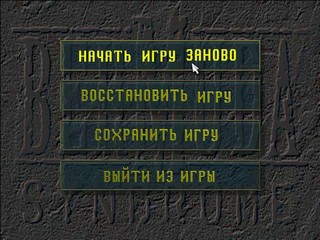 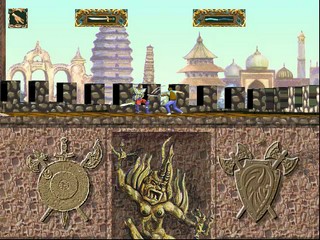 At first I like to say thank to NHG, for his tricks, glitches and also just for support, he helped me to improve my earlier test-run by a lot. We have previously worked together when he made a wonderfull speedrun of Another World for SDA it was favorite game of my childhood, i think since when we become a good team.

Secondly, i must warn that i am not good speaking English, so i not sure how seriously my explanatory notes were damaged during my translating. If you will understood a half of them - it is already a good achievement.

Turn our backs while talking with Natalia to prevent additional walking when Jack will give hand to help her stand up. Btw it is only one dialog in the game which requires to chose variants to pass it successfully. The rest dialogs can be skip just by holding Enter.

No need to waste time to climb up, instead, just kill the dinosaur in 5 shots, after dino's death, disappointed snake remain without food today.

While platform is lowered we take out our shotgun to make single step forward (because normal walking is forbidden).

I really hate this part because too many dialogs / loading scenes. Also one invisible annoying thing here, if hang on the tree-root immediately after Natalia - it give no effect, so we need to wait at least 0,5s before doing it. And then need to wait Natalia to hear her smart idea to catch a little dino as a bait (it is don't appear without her tips).

This tree-root must be cuted very-very quickly, before Natalia sit down.

We did not go into this portal(#3) - it can be skipped. Also dont need to wait Natalia here, she will appear after the bridge.

Old enemies, Tyrannosaurus and Triceratops are combined powers to stop me. We need 10 shots for killing each. To defeat the first one we need a bit of luck manipulation. These two dino are impossible to skip, because invisible wall inside them prevent it.

Rolling forward while shooting two colored Pachycephalosaurus to make Natalia jump down from right side.

The hook itself is not will need, but we must get it.

Interesting that the second crawler-creature is fall down without shooting in it (it happening every time).

Lava-floating-platform is "a bit" glitchy: if we fall down yet faster it dont appear, also it have not so big size as it look and because it execute run-jump is impossible here.

Using the hook not needed. But unfortunately we cant skip whole previous cave section because if we have no this hook - liana is impossible to cut down. If liana is not cutted - Natalia is not appear after air crash. Anyway this minor glitch is still timesaver because now we start movement from middle river not from shore (raft is moving very slow).

Made exchange our precious crystal for the ball with suspicious dwarf-Tauron. Holding Enter too long is dangerous here, because bidding-dialog can be started from begining.

Funny side effect of hook-glitch, now Natalia make torch not from using fire but by using river water.

Just after entering into cave I return to previous screen to make Natalia minor shift up forward.

A few words about Natalia AI behavior: Two Screens Rule: "If Jack cross border of the next screen before Natalia is appear on the current one => she will stop and not pursue us more (1) or will displaced a few screen(s) earlier (2) or even completely disappeared (3)." Variants #2-3 are obviously unacceptable for speedrunning (variant #1 is usefull in some cases). Because of it we usually waiting her. Also she dislike some enemies and we must kill them or she not want moving. And so because of it we fight with 2 walking-dead meat monsters without crossing next screen (to avoid v#2 bad scenario). Her AI-behavior while climbing up and down is more complicated, if be short "she always must see what we do", but in really is not so simple, there are many exclusions and special cases; If be yet more shorter "she is stupid as a chicken".

Old dwarf cheat us, we cant take back the first ball (too big distance for jump). I'm sure sly dwarf will take this ball back soon and then he will sell/exchange it to the next naive traveler. Again, and again... and again. So we forced to use the second ball twice. On the back way from second ball i hit the wall and fall down - "it was a part of plan". Also i killed the last walking-dead meat on the back way because it is faster. During withdrawing ball, is significant to forbid Natalia jump down.

Nothing special. Both Stegosaurus are killable but we not so cruel because they are endangered species.

Opening the grate on the floor directly under Natalia for accelerate her lowering.

Actually possible to avoid Natalia's kidnapping, but unfortunately Tauron (in segm.18) will not appear until we not release her from prison, even if she never kidnapped. I hit the wall and fall down - "it was a part of plan too", because falling is fastest method of descent.

I took damage for pass gorilla-archer, skipping giant weasels exemption. Also after this archer i made single walking-step forward before running to make a jump directly to next platform and avoid climbing up (it is very minor difference but i used this trick several times).

Not enough free space to avoid this gorilla-warrior as easily as others. Non-trivial movement sequence need here to skip him.

Do not turn off generator. We skipping green-energy-field by taking damage once again - it allowed save ~1min19sec.

Gorilla-axeman's are the easiest kind enemies in game, they never-never hitting me. Not need to think about them at all, i count them as a part of decoration.

Nothing special. We need kill him to get keys.

We throw a girl just after her escape. Begin the running directly to the dwarf.

Nothing special.  Still running to the dwarf. He have a job for us. If we help to organize an escape members of his mafioso-family from the jail he give us a super-mega sword. At first look it is a good deal!

In the jail i made a single walking-step forward (similar reasons as after archer in segm.13). What a surprize, meanwhile we are absent Natalia is finally return back. Taking the promised sword.

While we are running around Natalia is very like to disappear. We need to control her behavior very carefully.

Nothing special. Opening the grate under Natalia is not best idea this time.

Scorpions and eggs are very hard targets for shooting. If shooting fast he miss them in more than 50%. Need to doing thin delay between shots it is very annoying. But even knowing about delay not enough, also need a luck manipulation, so i missed two shots because of bad luck (one here and yet one in seg.24).

Micro trick - turn around when taking the green energy balls to make fall in needed direction.

At screen with the Big Prawn i jump up to attract its attention.

After swimming our shotgun is wet. We obliged to wait ~70 sec while it will become dry. Natalia not will move until scorpions are alive. But we have a sword!? No, this "sword" is completely useless against them. Damned dwarf cheat us again :(

Only one thing we can do here without weapon - it is destroy all scorpions eggs, hitting them our weak body.

Putting last 3 bullets into shotgun. 2 of them we need for palace, the 3rd i used to try kill slow Natalia (no success).

After her teleportation we jump not directly in water, but on the corner only then in water. It requires explanation - horizontal movement underwater is very slow so when we jump from corner we moved an short distance above the water 2-3 sec faster comparing with time of swiming the same short distance underwater.

If we swim close to underwater ceiling (or walls as well) Jack will stuck and swim slower, so we keep distance from them.

After Ankylosaurus we are shifting both stones simultaneously, it a bit faster than shift them for two approaches.

Nothing special. I call this part "Flying turtle" because is move very slow.

We still flying. Natalia says: "Honey, it so hot here. Ask one of these nice winged creature with axes to work as fan for the princess."

Nothing special. Our winged friend is disappear. Took a new key. Oh... wait a minute, damn it, even this lifeless coward possessed a sword which better than ours "dwarf's fake". Only one consolation - i got nice pixel-perfect jump on the back way.

On back way to the egg i fall from high, taking damage, it is allow to save ~16 sec.

The time to use our last two bullets.

Natalia must to stuck on the middle platform. It pretty complicated. I spent a whole hour to find a way how to do. Normally she prefer to stay down from right side or climb yet upper, more than needed.

We need kill this guard Natalia because afraid him.

While waiting Natalia I pulled the lever to avoid pursuers (it was joke).

When climbing into last hatchway need to wait a bit before jump or Jack be hit by invisible hindrance.

All three guards are easily skipped by sliding movement.

I start to attack Telquad from the throne side to avoid his teleportation.

Strategy the same, we fighting in centre to avoid his teleportation. (He do it if he is huddled close against the walls.)

Post-fight. I stayed on the knee in front of old king as sign of respect.

In commentaries i didn't made accent to my mistakes (because, it is work for verifiers), however i think it is more or less ~1.5-2sec of mistakes/inaccuracies per segment on average. {The main directions for improvements are - shooting/charging shotgun optimization, luck manipulation, several more exact jumps, faster inventory choosing, better Natalia behavior manipulation, more faster dialogs and ect.}

So if execute the same route, but flawlessly – up to 1 minute of improvement is seems possible in skillfull hands. Probably around 2 mins for soulless TAS. Also there is a chance to discover a new tricks (or may be not) - in this case improve can be more significant. In several places possible to walking through walls, but all these places (which i know) are completely useless.

I'm not good speaking English, so i not sure how seriously my explanatory notes (and sense of humor) were damaged during my translating. If you are understood a half of them - it is already a good achievement.