Released in December 2003, Beyond Good & Evil combines various action and adventure elements with a wonderfully styled setting. The planet of Hillys is under siege by mysterious DomZ forces, and is slowly caving in, despite the best efforts of the elite troops known as the Alpha Sections. As Jade, a young freelance photographer, can you uncover the truth behind what is happening? 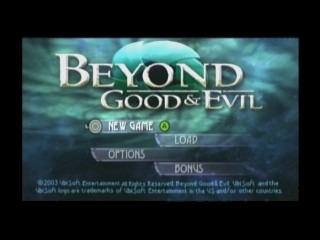 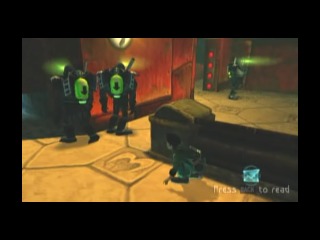 I started this run several months ago, though I didn't work on it much until now. My route is entirely the product of my own research; there may well be tricks I don't know. I've spent a lot of time on it, and I'm satisfied with this run, at least for now. I think it's pretty good. But of course, anyone is welcome to try to make a better one.

Beyond Good & Evil is a wonderful game, but it isn't perfect. The controls can be a bit sticky, especially when camera angles are changing. If I run in an obviously wrong direction for a moment, it's usually due to that. Sometimes I get hung up in doorways, or other minor errors slow me down. Also, the audio desyncs during cutscenes on occasion. Sorry.

I enjoyed making this. I hope you enjoy watching it.

- The hovercraft nearly always kicks me out once when I try to leave Mammago Garage. I don't know why it does that.

- In the Secondary Shaft, you don't have to kill everything, you just have to get Pey'j to step on a trigger at the other end of the room. But killing everything is the only reliable way to get him to do that.

- Black Isle went pretty well, aside from getting hit a lot. Fortunately, I didn't die, but it was close.

- Pey'j has a short attention span. "I once saw a- hey, Jade, a school of blue scorpion fish!"

- Don't fear the reaper. Really, don't. He never even attacks if you keep the pressure up.

- I was pretty messy on the Factory boss. It can be killed faster.

- I made up for Black Isle by not getting hit once in the Factory. I don't think I've ever done that before.

- I aimed a few pixels too low trying to knock out a guard in the Alpha Sections Warehouse, woke him up, and got killed by the lasers. This would've been a no-death run if I hadn't done that. At least it only cost me a few seconds.

- On my way into the Slaughterhouse, I picked up a boost in a place where I'm not used to getting one. Soon after, I was driving up a ramp, and thought that it would be a good place to use a boost. As it turns out, it wasn't such a good place. Oh well.

- In the Trolley Entrance, you don't have to push the box as far as I did. But if you don't, sometimes Double-H won't follow you.

- I was a little off heading through the minefield on my way into the East Wing. Just a little.

- After picking up the pearl in the East Wing, there's one guard I have to get around. I didn't research this guard's movements very well, and it cost me some time. In retrospect I probably should've just rolled past him instead of shooting him.

- Good teamwork? You call that teamwork, Double-H? You didn't even get to the party 'til it was all over. Your teamwork is as bad as your directions! ("It's that way, Miss Jade...")

- While exiting the slaughterhouse, I pressed the wrong button and slammed into a barrier I meant to jump over. I've been making this mistake ever since I switched from the 'Cube version to the Xbox version. In a way, this was fortunate, because I usually make this mistake while fighting the DomZ serpent that attacks shortly after. Making this mistake here reminded me to not make it there.

- The two guards at the Cloister landing strip noticed me when I was trying to stun one, and I had to fight both. That could've been bad, but they went down quickly.

- Pey'j's AI froze when I needed him to open the door to the transmitter room, and I had to run back to the other elevator to get him unfrozen.

- I got real lucky fighting the three guards in the belly of the spider. My super attack usually takes out zero or one, but this time it took out two. Apparently, this is a feat of such magnificence that it snapped the mind of the third. It took me a moment to realize that he wasn't attacking me, and then he died.