Released by Wisdom Tree in 1990, Bible Adventures delivers up some good old Christian fun. Players may choose to play through the stories of Noah's ark, Baby Moses, or David and Goliath while. Singing Kumbaya while playing isn't mandatory, but strongly suggested. 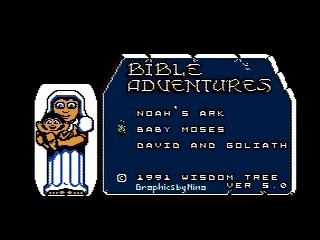 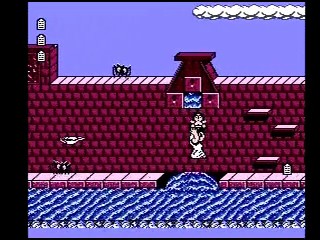 My thanks go out to Oreos for being delicious, my stream watchers for cheering for Moses to fall in the drink, my family for not sending me to an asylum (yet), my boyfriend for buying me a capture card despite what I run, and -- most of all -- Wisdom Tree. Without the tree of knowledge, we wouldn't ever have games like this.

Bible Adventures is supposedly a game focused around Biblical stories and adventures. There are three scenarios -- Noah, David, and Baby Moses. Noah is nothing but pain and suffering, and David is a sheep gathering platformer. However, despite those two wretched pains, Wisdom Tree somehow created a gem out of Baby Moses.

The reason Baby Moses is fun is because you can throw him in the river. Seriously, that's the reason it's fun. For some reason, the programmers decided it was a good idea to have your character move once every three frames, leading to the painfully jerky animation in the game; the background moves at a different frame, too, adding a lack of synchronization to the movements. The physics are absolute crap, especially when trying to jump on platforms. Half the time, I ended up with Miriam doing bunny-hops because of how broken the jumping mechanic is.

Luckily, the physics of the game are so broken that some things become easier. First, enemies have a habit of not colliding with your hit box so you can run right through many; some will be guaranteed to hit you, though, and routes need to be planned out to avoid those guards. Second, grabbing Baby Moses makes you invincible for a second. This generally isn't helpful since Miriam freezes, but if you pick Moses up right as you fall, you can keep your movement up while being invincible. This helps me go through the river on the fourth stage -- jumping from under the river makes both Miriam and Baby Moses drown.

This run is as close to perfect as I care to get. There might be a way to improve half a second, but without additional glitches, I don't think it will get under 1:55.

It's already taken more time for you to read the comments than watch the run, so just go take a gander. If you like these things, you may just enjoy this run:

--throwing Baby Moses into the river

...Sadly, I know most people here like that last one, but I hope people will forgive that shortcoming. Enjoy the run!

If you like more, erm, strange games, visit
http://www.twitch.tv/brossentia