Set in an alternate history 1960, BioShock places the player in the role of a plane crash survivor named Jack, who must explore the underwater dystopian city of Rapture, and survive attacks from the mutated beings and mechanical drones that populate the city. The game incorporates elements found in role-playing and survival horror games and was created by the developers of the System Shock series. 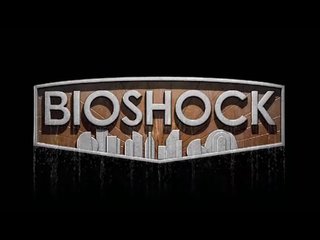 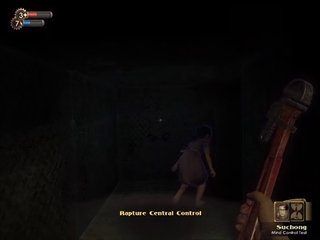 The table in medical pavilion is unlike any other item in the game, and remains a solid state when held/thrown. This is the only means of object hovering in the game.

Purposely dying to warp to a specific vita-chamber

By playing an audio diary when there is already a radio message playing, you can skip that message and the next radio message will have higher priority than your audio diary. Used to skip long radio messages or to get through a speech with a trigger at the end. Radio messages and Audio Diaries have different properties.

Using telekinesis to move objects and stack them in a way that allows you to get to places that you normally couldn't.

By quickly switching between weapons and plasma after you use a shotgun/grenade launcher/crossbow and back to the weapon, you can skip the reload animation.

By walking a certain path or looking in a different direction, you can skip activating a certain trigger. (Floor based or Look Based)

Introduction to Rapture, can't do much in this part of the game except wait. I use a neat little trick to get positioned outside the bathysphere which allows you to look around Rapture more freely.

More time just standing around, very basic route with good optimization. Skips a floor based trigger at the very end.

Quickly hack the bot and deactivate it so that it won't get in my way later on. Go through the next few rooms, flipping the switches and grabbing the machine gun. Next I go and get the incinerate plasmid to melt the ice for daddy dental. After melting the ice, I make sure the splicer throws the table before killing him, then quickly grab an audio diary and the telekinesis plasmid. On the way back, I grab the MToF, and drag it to Steinmann's area, using it to hover over this wall allows me to skip activating the vita-chamber. Kill Steinmann and deathwarp back to daddy dental, then just a quick run to the bathysphere.

Start walking as soon as the area loads, so I have to find my way in the dark for a brief moment. Head directly to Fontaine Fisheries and audio diary skip peach's speech, quickly kill the splicer and wait by the door. Tele-grab the grenade launcher and do another audio diary to open the door. From here I go the intended path to get the reseach camera as well as the 3 photos, on the way back to Fontaine Fisheries, I do a small death warp. Audio diary skip both Peach and Atlas's speech. Stand by the closed gate after putting weapons in the pneumo to manipulate peach's spawn. Quickly kill peach, grab the weapons from the pneumo, upgrade shotgun damage and melt the ice to leave this area.

Make my way through the hideout until I reach the room with the lever. By pulling the lever as I move backwards, I'm able to get out of the door before it closes and make my way to the end of the level. Audio diary skip to leave the area.

Walk forward and activate the radio message, quickly spin around and activate the door back to Smuggler's hideout (Radio message acts as a Transition Delay). This instantaneously opens the door to Arcadia and I make my way through the beginning of Arcadia. I use the 1st two thughish splicers to get enough research points to get the sportsboost 1 tonic. After that, I keep making my way through Arcadia. I need one of the large wooden pallets, so I take out 2 splicers, a camera and a turret that are a nuisance when carrying an item. After Positioning the wooden pallet against the tree, I tele-grab a manure bag which helps me to jump up on top the wooden pallet. From here, I can jump up on top the tree. Once in the tree, I need a bit more height so I tele-grab the manure bag again and place it down on top the tree. Once I have enough height, I can simply jump over the trigger to the right of the tree and avoid the door closing. From here it's just a brief walk to the Bathysphere.

Find my way through the dark, and quickly grab the blue suitcase. Take this into the Bathysphere room, then grab one of the trashcan's and bring that with me as well. I Item stack the suitcase and trashcan against the sign here, then I activate the trigger for the bathysphere to sink (This allows me to get the "meet sander cohen" quest and regain my speed for later). Go back to the suitcase/trashcan, jump ontop of them and then get up on the sign. I can then get on top the hanging light and wait cohen's speech to begin. A simple Diary Skip allows me to obtain the quest, and get my speed back. I can then jump off the light and land on top of an invisible wall above the railing and make my way to where the Bathysphere should be. While the Bathysphere is gone, the lever inside it is still there (just invisible, and tricky to find). I activate the lever and leave the area.

From the Bathysphere until the room with the switch, everything is pretty much straightforward. I grab the needed audio diary off the corpse, play it from the menu and immediately skip it with a radio message. This starts the animation/timer for splicers cutting down the door. Once the doors open, I make my way to the main core area and take down the 1st big daddy. Once he's taken down, I hop over the rail and tele-grab the crossbow, then head into the workshop. Here I kill the 2nd big daddy and then go get the diary near the bomb casing to start the mission. Head back to the lock door, tanking the turret's fire, open the door and run through this room to the power to the people machine. Upgrade grenade launcher, hit the switch on the desk then taking the nitroglycerin before doing a deathwarp. At this point, the diary has finished playing and updated the goal to collect the bomb parts, so I grab 1 of the ionic gel and some wiring from the 1st big daddy that I took down. Head back through the tunnels and grab more wiring off a big daddy corpse, then deathwarping back to the main core area. Hopping over the rail and going back into the workshop, run to get the 2nd ionic gel and the 3rd piece of wire from the big daddy. Grab the 4th piece of wire from the last big daddy corpse and put the bomb together. After it's complete, I use the turrets to deathwarp back to the main area and continue by hopping over the rail to the left. I jump on a pile of books to get enough height to make my way up the side of one of the machines. From here, I have just enough height to land on a platform inside the core and walk right through it so I can place the bomb on the other side before jumping down onto a rock to once again deathwarp. Now it's just a simple walk back to the room with the lever, tanking all the damage and waiting until I can leave the area.

I radio skip Ryan's message and let atlas begin talking as I make my way over an invisible wall and head towards Ryan's office. Sit through the cut-scenes, then diary skip both of Fontaine's last speeches to open the door and leave the area.

I head straight to the door for Apollo Square, then I use a method of Transition Delay. I play the longest Radio message available, activate the door and then make my way to the 1st dose of 192. I need to grab the diary in suchong's office, but playing it would allow the transition to Apollo Square to happen. So after picking it up, I play it from the menu, and skip it with a radio message while still in the menu, this hits the trigger at the end of the diary, but keeps a radio message playing to prolong the transition even more. I then head up to the 1st dose of lot 192. After grabbing it, I play an Audio Diary and go straight to Apollo Square.

Grab the 2nd doese of lot192, and make my way towards the exit. Instead of taking the elevator at the end, I can make my way into the broken elevator shaft next to it and tank the fall damage to save a few seconds. (This trick can only be done on easy, currently)

Do everything normally up until the security bots break open the glass door. Quickly take care of the bots, then I get into a good position. I did a quick save here(1 shot trick), that's why there are a couple of shots after i get into position. Here I activate the look based trigger to cause Fontaine to break the column, and quickly jump over the floor trigger that holds you in place. Activating the triggers in reverse order like this allows me to get to the door before it closes and move on to the next area.

The worst part in the game, with no way to skip it. This area's only trick is to manipulate the little sister into running, everything else is done the intended way. Fighting is primarily done with telekinesis to speed things up.

Place 2 proxy mines in the general area where Fontaine will jump down, begin the next phase. Allow him to hit the proxy mines, then finish off his health with the shotgun. Then repeat the cycle 2 more times until he's done.