Bionic Commando was released by Capcom in December 1988 for the NES. The unique thing about this game is that your character cannot jump. Instead, you are equipped with a grappling arm that allows you to swing around like Spider Man! Another interesting thing about this game is that it somehow slipped some language/violent content past Nintendo's "Quality Assurance" people. 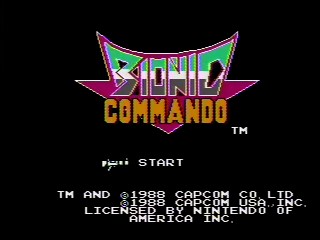 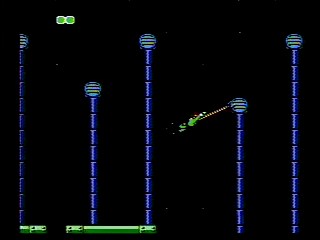 Huge thanks to everybody at SDA for doing what they're doing, and to feasel for getting me into this game!

Bionic Commando any% is a pretty frustrating category. I absolutely hate it. I really only did this run because I wanted to set a bit of a higher benchmark for anybody else interested in running this category. The time can drop by at least 20 seconds; my sum of best splits is 15:18, but I omitted a lot of the optimal strats and found some new things since I did this run. Sub-15 is probably even possible.

The reason this category is awful is the truck skip at area 8. Feasel explained to me how this works (thanks!!), and I'll pass along that knowledge. Basically, your helicopter functions on a 2-frame rule on the map. When you confirm your destination, your helicopter either moves 20 or 21 frames afterwards, depending on the frame rule. The trucks will move on the frame after you confirm your destination, though, so they're immune to this. The end result is that you have a raw 50% chance of either "gaining" or "losing" a frame of movement to the trucks.

To skip the truck at area 8, the truck need to arrive before we do. Of the 10 movements it takes to get there, we need to "lose" a frame of movement to the trucks on 6 of those. If we go in completely blind, that means there's a 37% chance to get the skip. You can tell if you got the good/bad frames on most of the map movements by looking at what pixels certain trucks stop on, though. For these attempts, I made sure that I had at least 3 "good" frames in the first 4 movements. The visual cue for this is the truck at area 12; if you get at least 3 "good" frames, there will be one row of white pixels between the number 12 and the back of the truck. Otherwise, the back of the truck will be touching the bottom of the numbers. By forcing 3 out of 4 good frames, we increase the odds of truck skip to 65%.

Unfortunately, this means that most attempts never get to play a single stage. Even if you do get favorable truck luck at the start, you still need to play 2 of the hardest stages and then hope you succeed at the truck skip. After losing several perfect runs to the truck skip, I just stopped caring and wanted to be done with this category.

So yea, this is very improvable, but I need a break from it. I'll probably revisit it later. Area 6 was disastrous in this run, mostly from a failed ceiling clip at the end, failing to enter doors, and omitting the optimal strats. Area 9 also had a lot of slop. I lost like 8 seconds in area 12 from failed elevator clips, which really sucks. Areas 5, 3, 7, 10, and 11 are quite good, but the rest of the mistakes are incredibly costly.

I hope you enjoy the run!

As always, thanks to everybody at SDA for everything they do to keep things running smoothly.

I have to give a HUGE thanks to feasel for getting me into this game. Running Bionic Commando has been an incredibly fun experience for me, and it has definitely grown to be one of my favorite NES games. He also taught me the mechanics of the game and showed me how to do most of the shortcuts, which is pretty darn important.

I also need to thank Master-88 for laying down the ground work for the 100% category. His 26:57 run on SDA had very few execution errors, but we have just found a lot of new optimizations and tricks in the 4 years since that run was completed. I definitely took a lot of my level routes from his run, and his map route was the foundation for the truckless route I came up with and used in this run. Also, he discovered the "room storage" glitch that I use to save over a minute in area 8. Though it was not really understood at the time of its discovery, his posts and videos of it are what made me investigate it more. On the subject of the room storage glitch, big thanks to Omnigamer for helping me figure out EXACTLY how it worked. That saved me a lot of trial-and-error time.

Lastly, I need to thank Hotarubi and the TASers of this game (Phil, Aglar, and nEilfox), because I borrowed a lot of strats from them.

100% in this game is defined simply by filling out your inventory. This is the only definition that makes sense, since neutral zones can't be "beaten" (so an "all stages" definition would be pointless). This is the definition Master-88 used, and I agree with him. Most of these items are completely useless, but the energy recovery pills that we get from beating area 1 are incredibly useful. They allow us to fully refill our health once per level, which makes this category much more forgiving. This item, and the lack of truck luck, are what make this category so much more fun to run than any%.

I won't go into details about basic game mechanics like I do for most of my other submissions, simply because they are too complicated to explain in this case. Perhaps I'll eventually fill it out in the KB. I do want to talk about the "room storage" glitch briefly. If your bionic arm is attached to something while you are on the ground, you cannot enter a door. However, if you enter a door on the same frame that the bionic arm attaches to something, the game thinks you went to the next room but won't actually send you there. When you enter a second door, the game will send you where that door ID would take you if you were in the stored room. If the game doesn't know where that door takes you, it will send you to room 00 by default (which happens to be the first screen of area 1). It's a bit complicated to explain, so I'll use the example from area 8 to help:

The first room of area 8 is room 07. This isn't terribly important. I enter Door 01 which takes me to Room 4E. There are two doors in Room 4E:

In Room 53, the boss room is behind Door 01. You can see where this is going. I go to Room 4E (the cannon room), activate room storage on Door 00 so that the game thinks I am actually in Room 53 (even though I'm clearly still in Room 4E), and then go through Door 01. Even though that door should take me back to the first room of the stage, it actually takes me to the boss chamber because of room storage. Pretty cool. I can go straight to the boss room from the second room in the level, even though the boss door is still locked. This saves me from having to access both communicator rooms and saves over a minute!

This is the only level in either any% or 100% in which the room storage would save time. It doesn't even save time in area 12.

As for the run itself, I am extremely happy with this. I was thinking that my eventual goal time would be 22:20 or so, but this blew it out of the water! I'd do some individual level analysis but really there wouldn't be too much to say. The biggest mistake in the run was somehow getting hit by the area 5 boss; I thought he only needed 1-2 more shots so I was going to kill him in the air, but he needed one additional shot. The room storage glitch in area 8 took 4 tries, which cost an extra ~1.5 seconds. I omitted two time-saving grapples in area 6 that save a combined 3 seconds, but hitting either one of them is extremely rare so I opted to not try in this run. There were some really minor errors here and there, but overall this run is as perfect as I can ever hope for!

This is 14 seconds off of my sum of best splits, and my best splits are completely mistake-free using the fastest strats I know of so it's totally unreasonable to even have a chance at matching them. I am definitely done with serious attempts at this category for now, but I will probably always play this game. I hope you all enjoy the run! This is definitely one that I am proud of. ^_^