Zero was 2017's retro-style remix of NES's very own Blaster Master. Though the core of its mechanisms remain in place, in one of the game modes all the weapons were tweaked and enhanced for a new version of Sophia, the wondertank, that is rendered generally invulnerable. It was the first game on SDA to have been run on the Nintendo Switch. 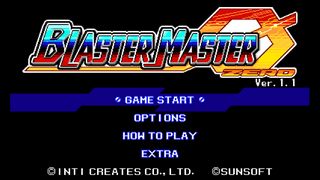 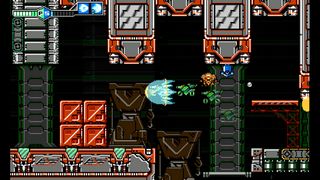 There are no 100% runs for this game because getting the good ending is almost the same thing.

Blaster Master Zero is the Metroid Zero Mission of Blaster Master, basically part reboot and part remake. Released in March 2017 for both Switch and 3DS, it is a collaboration between Sunsoft and Inti Creates that uses a retro art style emulating the original NES game with an expanded scenario and gameplay.

Here is a 1080p, no twitch alerts, no ads, no subscribers only VoD, DRM free run of Blaster Master Zero.

Sophia Zero is an enhanced version of Sophia 3rd.
The main differences include:
* No knockback when taking damage
* Special bar refills slightly faster
* All of the weapons have been improved in some way.
* Starting a new game with all weapons, keys and abilities unlocked!

Weapons used during this run:

Laser
A fast long range weapon which can pierce through multiple targets. This was used in the last room of Area 8 before entering the dungeon.

Cannon Shot:
An explosive weapon which has a massive blast radius. One of the most abusable weapons in Unlimited mode because it has a bigger blast radius and it does not damage the user.

Spark:
The only secondary weapon used on this run simply because it allows me to perform mini-dashes. The Sophia Zero version enables longer dashes and deals more damage against enemies, I am fully invincible when using this move.


Turret:
The only secondary top-down weapon used in the run. It attracts the enemies inside the dungeons and ignores the player, useful for Area 7's dungeon before Skeleton Boss and Area 8's first boss battle.


The run itself is decent and can be improved by a few seconds but the real challenge is to get a cleaner run and vital RNG against the final boss along with it because, if you don't get the luck required, the time you've saved before the fight will be all for nothing.

Area 1:
Fairly straight forward, a few minor hiccups in 2 of the tall rooms. Didn't get the big cyan special bar (worth 4 bars) drop against the wall enemy.

Area 2:
Easier to optimise than Area 1, I use up some dashes to kill the green critters and hopefully get good item drops.

Area 3:
This room is unique because none of the enemies in this area are actual threats and so item drop RNG isn't a thing. Using a Spark Dash allows Sophia ton dash underneath the falling pillars unharmed.

Area 7:
Using a Joy-con instead of a Switch Pro Controller has a nice advantage as I can mash the UP button as Jason slowly crawls inside a crawlspace.  I used the cannon to quickly destroy any extra bugs from the security lights without wasting time and then before entering the dungeon, I select crusher as it deals reasonable damage against Skeleton Boss (5 hits overall to kill by using 4 shots and a dash). Inside the dungeon, I select Turret to lure the security guard enemies and ignore Jason completely.

Area 8:
This area is the least consistent part because item drops can make a difference in the last set of rooms.  After dashing across mini spike pits, I select cannon to destroy any blocks below the player and a bunch of enemies underwater.  After the underwater section, I select laser to destroy a bunch of blocks quickly in the last room before the dungeon entrance, Spark Dash through the spikes and enter the last dungeon.

One major flaw this game has (as of V1.1) is that if you dash and successfully eject as soon as possible, the game crashes. Inti Creates is aware of this and will be fixed in a future patch (probably on the same day Gunvolt DLC is available).

The last dungeon is a labyrinth and the fastest route is left door 3 times and then right door. This skips any sequences where the doors are locked and the player has to destroy any enemy in sight.

Multidimensional Overlord:
This fight decides whether or not the entire run is a success or a failure, I had a lot of good runs died due to average or terrible RNG.
The boss can change colour that not only it changes its main attacking move but also defensive weakness/resistances as well.

Here is the order of forms from best RNG to worst.

Best form:
Brownish-Orange: This form turns out to be the best as it takes more damage from Striker than any other form and it can flinch from the weapon as well, you can see the HP bar suddenly jump to 0% with good mashing skills. This form's move is unleashing a small shockwave around the boss itself, it disappears and then re-appears based on the player's location. This form gets stunned for a few seconds after taking a hit from a Striker

Acceptable forms:
Blue: This form can take damage from Striker and can get flinched from it too but, it will require a few more hits than Brownish-orange mode. Blue mode's move is laying glowing mines which will explode in 8 directions. This is the only form that will drop power-ups after destroying a mine. This form gets stunned for a few seconds after taking a hit from a Striker

Red: This form can take damage from Striker but cannot get flinched from it. Red mode's move is using homing underground spikes that will hit the player if they stop moving for a brief second. This form gets stunned for a few seconds after taking a hit from a Penetrator

Worst form:
Green: This form is immune to Striker, if this happens during your serious run, you can kiss your PB goodbye. Green mode's attack is summoning 4 rocks, 1 starting at each corner, they go around the perimeter of the stage, increasing in size. This form gets stunned for a few seconds after taking a hit from a Flame

Area 2:
None (but more dashes if I got vital item drop in Area 1)

Area 7:
Use dash a few more times in some of the long straights.

Area 8:
Optimisation can be improved before the dungeon segment but the tough part is to get the same decent RNG against Multidimensional Overlord. Also playing a later version that has the Spark Dash eject bug fixed should enable me to save a few extra frames before entering the dungeon.