Unlike the previous 3D hack 'n slash games that came before it, BloodRayne: Betrayal is a 2D side-scrolling... hack 'n slash. Rayne is recruited by the Brimstone Society for a final mission: kill the evil master who's hiding in a secluded castle and unleashing evil hordes (and vampires) upon the world. 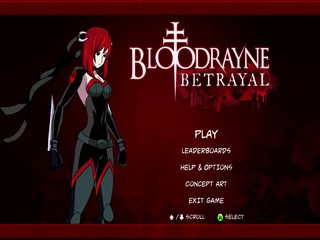 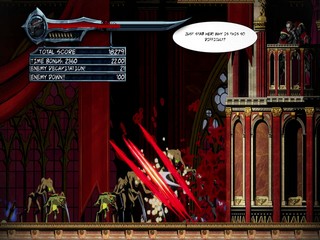 Unlike my Oniken run IL go whit text instead of commentary since this run is definitely not final and I am planning on improving the run. I will describe each stage and the normal street for everyone of them and make a special note for boss on the run.

S1: Pretty straight-forward stage goes fast dodge/kill enemy. I have to be careful about my ammo count to make some section go faster but it's pretty much it. The Worst part is the pink enemy that pop from the ground since those are mostly RNG.

S2: Pretty much the same as stage one but Whit a new annoying enemy the flies and frogs. They are small enemy that love to disturb your movement and do little to no damage.

S2 Boss Crab Puncher: First boss of the game whit the old strat this boss was kinda dangerous but now he is a joke just bounce of his weak point try not get hit by rock.

S3: I got bad rng here whit the pink enemy poping up at the worst time but I get lucky at the end by not getting any frogs going in my way (If they hit you they cancel your dropkick).

S4: The stage start whit an auto-scroller which you just try to survive, you can either kill everything or just stun an enemy. This is by far the worst stage of this run and the who's gonna be improved first.

S5: Pretty smooth spike/saw section get the spike elevator on the first cycle and I avoid the stupid pit death.

S5 Boss Crab Puncher Mk.2: Big difference from the first one this one got shielded weak point. I get bad rng here whit his attack since the fast way to kill him is to exploit chain reaction from the flies so i have to resort to the backup bounce strat.

S6: In this stage we meet for the first time Raven which we control at first. Pretty simple mash dash avoid thing. Huge skip at the end of the section I skip about 30 seconds of dialog between Rayne and Raven. We are not too sure how the skip work yet mashing buttons seem to do the trick. Rest of the stage is pretty simple I get some good RNG on the saw where I don't get grenade spammed.

S7: Pretty simple here the stage is made way easier by using all the traps (laser, saw) since those 1-shot all enemy. We get a gauntlet at the end and we have to get out whit as much health then possible because of the incoming boss.

S7 Boss Crimson Demon : I get good RNG on this boss since I manage to 2-cycle him (You can't 1-cycle here since you can only kill him when he his in the front).

S8: This is where the fun begin all the acid in the upcoming stage are instant-death one false move and you lose precious time. I do a somewhat safe-strat on the platform due to a glitch that sometime make the acid pop-up instant make you fall into the pool. As for the saw chase at the end if you touch the saw you die, I could go faster on the spike platform but I was unsure about the weird pattern I had.

S9: Raven help us to get the Sun cannon which is primary use for puzzle and to damage some boss faster. Rest of the stage is pretty simple lot of fight but no real threat.

S10 Another dangerous acid stage, easier than S8 but we still have to careful on the movement. I get good RNG on the big blood enemy on falling platform section since those cans knock me down and if I don't quick recover the animation is just long enough for the platform to fall and kill you.

S11 Boss Kagan: The fight start whit a gauntlet whit Kagan throwing electricity part. They do a lot of damage but the good part is that they 1-shot enemy. After that Kagan start flying around to attack whit blood waves. Pretty good fight here I use the gun and sun canon as much as possible and go really aggressive on him.

S12 You start the stage by getting Raven power to transform into a bird, which gonna have another use as well in the upcoming stage. Pretty standard stage since this is the bird mechanic tutorial pretty much. The second part of the stage is really dangerous due to the plated enemy which take a lot of punishment before going down. It is really easy to die on the second part due to the combination of bomb thrower and saw that take out your health pretty fast.

S13 Here the fun part I skip most of the fight in this stage due to a small programming oversight. I got either over or under the fight trigger which make the enemy never spawn. Whit that the game never lock the camera and allow me to go past those screen and save a lot of time. I have to be careful for the bird zapper since those pretty much mean death. As for the saw section those are really dangerous as well since if you get hit or miss a jump you pretty much die due to the fact that the bird zapper will deny you any recovery.

S14 You start the stage whit an auto-scroller like S4 with the twist that if fall into the blood you die. I have to be a bit careful here since enemy love to try to knock you out. I make the platforming section faster by using the bird instead of jumping I still have to be careful at the end due to the bird zapper.

S14 Boss Zeta Gamma : Pretty Obvious weak point this boss got some move and is quite dangerous (He can even kill you when he's dead if you miss the dodge). I am going to list this boss attack seen.

Blood Orb: Zeta makes a lot of orbs appear on the screen whit some safe spot in the air or on the ground. You can get kinda stun locked here if you don't recover fast enough.

Fist Smash: Zeta smash the ground and make rock fall from the ceiling. You can destroy the rock as they fall making it easier to avoid. There is a safe spot under him if you position yourself correctly and use the Sun Canon up to destroy the rock and damage him at the same time

Eye Laser: Zeta will focus his eye on you to try to zap you. The laser do not hurt you until the glow bright red. If you are unlucky you can get hit multiple time when he alternate his eye.

Dash : Zeta only do this attack twice at 50% health and when he dies. You have to dash toward him to dodge him. This is the attack that can kill you even if you killed him

Huge Laser: Zeta spawn Laser across the screen whit small gap in between. You can transform into a bird to dodge between. If you are lucky he will not spawn any under him which allow you to just use the Sun Canon to damage him.

The fight get pretty close due to some huge mistake on the laser part if I had missed the dodge at the end that would had mean death.

S15: Last stage, lot of danger here. First acid everywhere that will kill you if you miss a jump. Canon that disturb you mid jump making you fall into endless pit. I skip a fight near the end of the first section by going over the fight trigger. The second section of this stage is pretty much only enemy gauntlet whit some platforming section. Fun fact I lost a run on the last fight here since the bird zapper reach you if you are on the ground or a little above. The timer stop when Rayne transform back.

That was the last stage and the end of this comment section I hope you enjoyed the run and would recommend this game to anyone who like old-school platformer. This game is not easy especially whit all the instant death trap but still very satisfying to play and run. And also like I said this run is not final and will be improved.