Released in August 2008, Braid is an independent puzzle/platform video game that incorporates time manipulation gimmicks into the encountered puzzles. The unique and clever puzzles have earned the game much recognition. The story focuses on the protagonist - Tim - and his efforts to rescue a princess from a monster and be as pretentious as possible about it. 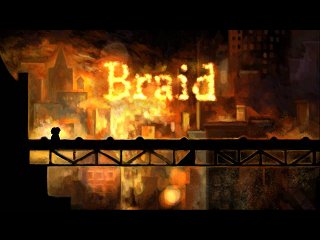 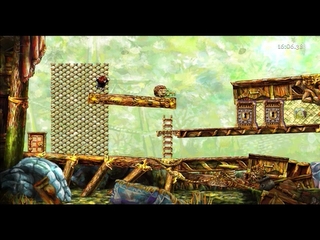 Note: The ingame timer shows a time of 27:50:70 while the video is like 3 minutes longer. This is because the timer doens't count time while solving the puzzles between the worlds.

This is the first speedrun I finished, which has been a way harder task than I could imagine because Braid is a VERY unforgivable game to speedrun. It happens often that if you do a tiny mistake it costs you 10 seconds or more because you have to wait for some enemy to respawn or something. Anyway it's been too addicting to me to run this game to consider stopping it. I've been running this game for a long time and stopped when I reached a time of about 29:18 which i was very pleased with. Some months ago I discovered the huge time saver in the very last world which saves up to a minute, so i decided to do a rerun of the game and record it this time.

It wasnt long until I reached a final time of 28:35 which I was very pleased with and decided to upload it for the forum. Since I don't have access to the xbla or psn records I just could hope that it was a good time until ZenicReverie posted the times for me. He told me that the xbla record for the whole game is an insane 27:54, 40 seconds shorter than my run. At this point i had to begin to record any new attempt to look what kind of times are possible for me. (I guess a time between 27:20 and 27:30 is the absolute minimum for this game). I didn't need that long to do a 28:17, but my goal at this time already was sub 28. And this has been the most annyoing part of doing the run with the most resets by far. I finally reached my goal in a 5 hour session with like 40 to 50 resets. I didn't know before that I could handle such frustration ;]

Up to individual level comments. Generally there's many tiny 1 sec mistakes (like missing edges etc) in the run and I can't mention every single one of them. I consider this route to be the best for a single segment. There's faster ways to do 1 or 2 levels, but it's just too dangerous. I'll do it world by world and mention the things significant to me.

World 2:
2:57 is the best time I can do here. The world went pretty good for me, just one annoying mistake worth 1-2 sec at the end. Nothing more to say here.

World 3:
This world went better than usual. I would reset every run showing a time longer than 8:20 at the end of this world. I did it in 8:16, which is the best I ever did as far as i remember. The world itself can be done some seconds (maybe 3-4) faster.

World 4:
I did two mistakes each worth up to 5 seconds. First, in "Movement by degrees" the goomba taking my key lost it too early. So I had to walk a little longer to get it, which sadly means that you have to wait some seconds for that last goomba to come out. If done perfectly it comes out just when you arrive there.
The second mistake happened in the next level "Movement, amplified" and is generally the same mistake, just that I don't have to wait for that goomba but for the plant to get down.
The rest is good despite the usual tiny mistakes.
I guess it's possible to reach the goal within a time of 12:15 to 12:20.

world 5:
Crossing the gap second try is just awesome for me. Usuaylly many seconds are lost here. After defeating the seconds boss I rewinded time a little too much, so I have to wait for 4-5 seconds for that door to open. The rest went fine.

World 6:
The ability for this world is to slow down time, so you can easily say that the most time can be lost here. Mistakes usually worth 1 seconds can cost up to 5 here.
In "Cascade" I played a little too safe and lost 4 seconds. Despite that the level went better than usual, it can be a real time killer. In "Impassable Foliage" there's a hard jump I can't pull of every time, I think I was holding my breath the whole level.
In "In another castle" I was a little too risky and again lost 4 seconds.

World 1:
The very last level can destroy any speedrun. It's required to be as fast as possible and hit two edges, which is quite random. So if you're unlucky, you have to rewind several times losing a huge amount of time. Especially the second edge is very hard to do. I did second try, therefore fucked up the first one. Anyway this is an amazing run of the last level.

So that's it. I'm not that good speaking English, I hope it's readable though.

Thanks go out to my girlfriend for being ok with me running this game all the time, ridd3r, feasel and toxicate for still being interested in a run of this game, ZenicReverie for posting the xbla records for me and of course everyone at SDA for running this beautiful homepage I can spend hours with.