Released in November 1998, Brave Fencer Musashi follows a hero, Musashi, who is summoned by Allucaneet's princess, Fillet. The quest involves Musashi collecting the five scrolls to stop the evil Thirstquencher Empire, ruled by Flatski. This game teaches a valuable lesson: never starve your employees while making a game, or else they'll rebel by naming most of the characters and places after food and drinks. 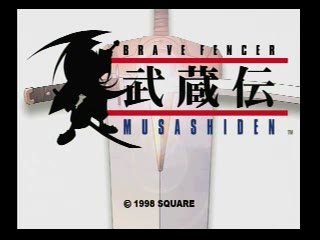 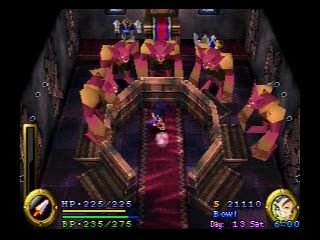 So here we are finally with a better Brave Fencer Musashi run. Lots of time saved from the previous "4:06"
record, and completed in a single segment. Even still, I don't intend to have an essay written out for this run.

Special Thanks:
There have been a handful of people that have helped me with various sections of the game, this is the list to
acknowledge those awesome people for doing their part for the run.

JMC4789 - For getting me into speed running to begin with. Also the one that pointed out the Poison Strats for Ant Queen.
Also found the double boulder drop while going to Skullpion (which I did NOT get in the run).

Phoenix3568 - Mostly for being active in the thread when I first started posting on SDA and helping with general theories and ideas.

vhgs - For finding strats to Dark Lumina Pt2, Ant Queen and for helping me look into some oddities within the game.

Deadsticks (>_>) - For showing me the Steamknight strat in his run on SDA.

I'd also like to take some time in thanking CWolf and Maggara for sticking with me for so long to see this run get demolished, as well as
all of the other newcomers to my stream that found a lost gem they once remembered loving.

About the Run:
I started running this late 2012. Though I've spent yeeears playing this game, speed running allowed for a different kind of replay value.
I believe my first completed run was around the 3:18 marker, in-game time. So There has been almost 30 minutes of improvements since
I started running this. There aren't very many glitches to abuse in this game, so it's mostly a straight-forward run.

If you've never played it, give it a watch. The music is amazing.

Chapter 1:
This section ended up not being very amazing for me. It's instantly noticeable when I'm assimilating the very first enemy. From there, I mess
up my jumps going up Spiral Tower and then go on to have a barely average Steamknight fight. Phase 2 is where I lost a good deal of time.

Chapter 2:
This was going fairly well, until Leno decided to start messing around and wasting time. The Raft section is my money route for the entire run.
Lost time during Steamwood Pt1 due to missing the lift cycle on the second level. Also lost time on Skullpions Phase 2.

Chapter 3:
First try Misteria Warp. That glitch can be tricky to grab. Some times, it'll work first try with no hitches. Other time, I just won't be able to get
it, no matter how many times I try. The Bar Dungeons went fairly well, besides a handful of hiccups here and there. First try Bat Jump in the 4th
dungeon however, pretty much sealed the deal that this was going to be a good run. Vambee Church Fight went great. Generally, there are 3
small cutscenes that happen during this fight. If you lock the Vambees at the entrance of the Church, you're able to skip these cutscenes.
If done correctly, you're able to gain a good bit of levels for Lumina. Relic Keeper went as planned.

Chapter 4:
Grabbing L-Vest, which is actually possible to do in Chapter 3 using the Church Bell. And then of course, grabbing the L-Goggles for Frozen
Palace. Gondola Gizmo section went great, as well as saving the town (again). Frozen Palace was better than usual, except for grabbing the
Red Eye. That room got kind of messed up a bit, but it worked out. Frost Dragon is never a challenge.

Chapter 5:
Steamwood Pt2...every one's favorite part of the game. This chapter was going pretty awesomely, except for the major mistake of falling all
the way back down when turning the power on to the mines. After, I end up falling in the poisonous water, which ended up not hurting me
at all since I get poisoned for Ant Queen any way. Really great Crit luck with Any Queen. Out of 11 hits, 7 were Crits.

Chapter 6:
Sleeping segment. The reason I do this is because of one simple fact, I can't get to the last area of the game unless is between 7am and 12pm
on Sky Day. After sleeping, I stock up on W-Gels and head off. Everything goes amazingly for once, except for a small mishap while destroying
the last day going to Topo. One of the foot soldiers eats my grenade toss, so I had to waste time smacking the door manually. Tower of Death
was pretty nice while Dark Lumina Pt2 was nearly grab-less. Dark Lumina Finale had no chance.
------

As it stands, there is still the possibility of getting a time of 2:47. There could also be glitches that have yet to be found, but for now, I'm
extremely happy with this time.