A flash remake of Mike Tyson's Punch Out, Breakfast Brawl plays virtually identical to the predecessor, but with breakfast themed enemies. Knock out bad breakfast menu items and beat the ultimate enemy - the bagel - for the crown of breakfast champion. 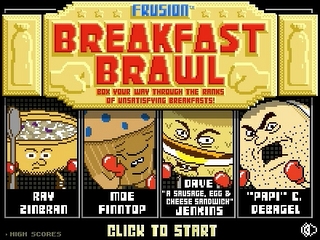 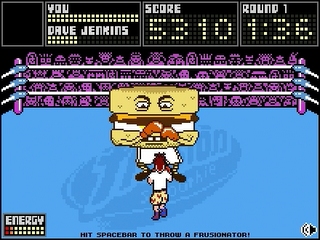 I did this run pretty much to procrastinate from the Punch Out Wii SS Contender run... sorry kefkamaydie :)

Back when I first heard about this game, I thought "This is obviously the best idea for any advertisement ever" and I've yet to see anything top this, although the Wario Land Shake It ad on youtube is a very close second. This is an ad for danimals frusion smoothies which is in the form of a Punch-Out game; whoever came up with this deserves permanent high fives forever. I'm almost ashamed that I never bought these silly smoothies just to show them that "hey that ad campaign worked; please do more of these."

As for the run itself, every breakfast is open to punches at all times either high or low, kind of like how it is in Super Punch Out. Any 3 consecutive hits will earn you a Frusionator (aka star) no matter what type of punches you throw, including frusionator punches! This game is timed by adding up the in-game time from all the fights, similar to the Punch Out runs. These fights are counted in whole seconds and each fight in this run is my best time.

Cereal (10 seconds): This is the basic 10 second knockdown that will be used for all fights except Dave Jenkins. It's worth noting that whenever you get a smoothie, time stops briefly.

Jenkins (25 seconds): This is the only fight without the 10 second knockdown, only because Dave is the most resistant to frusionators and will not get knocked down. The next best thing to do is to use the 2 gathered frusionators in conjunction with a normal punch to get a frusionator for phase 2. For phase 2 and 3, I've tried switching the amount of frusionators gotten in both phases around, and still ended up with a 1:35 left on both strategies.

Bagel (21 seconds): Surprisingly, Papi is considerably weak to frusionators to where the 10 second knockdown works again. Phases 2 and 3 are pretty self explanatory.

I hope this run was a part of your nutritious breakfast. If not, maybe you should try a smoothie :P