Released by Taito in 1988, Bubble Bobble was a very popular action title for the NES. Players took control of Bub and Bob, two boys transformed into dragons on a quest to rescue their girlfriends from the clutches of the evil Super Drunk. While the plot's a bit laughable, the action certainly is not. Featuring a two player cooperative mode and some challenging gameplay, this was a title that kept players coming back for more. 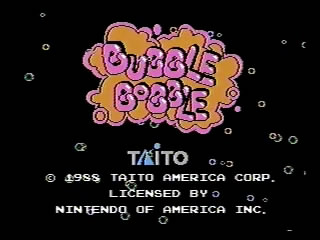 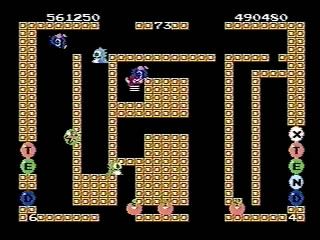 First of all, I would like to thank Romscout for inspiring me to attempt to speedrun games in general with his inspirational Mario RPG efforts. More importantly, though, I'd like to thank Brandon for sticking with me throughout this run. You never believed you had it in you, but I knew that you were the only one awesome enough to back me up in this run! Finally, I'd like to thank everyone else who supported our efforts.

As for the inspiration for speed-running Bubble Bobble, in particular? It came on a whim. I generally wanted to run an old, classic game that wasn't on SDA yet so I could finally fill in that gap in the annals of awesomeness. My first idea was to run Rocket Knight Adventures. I decided, however, that while I wasn't bad at the game, I was incredibly lazy and didn't keep up with it. Later, I was playing Bubble Bobble with a friend, a game that I've literally grown with. This made me think about running it, but I knew a 1 player run would be impossibly difficult (the game is hard enough as it is, to speed run it by myself would be murder!). I thought about potential partners, but the choice was obvious. My brother is the only one who has about as much experience with the game as me (after all, we both grew up with the game).

As far as strategy goes, the most important thing about running Bubble Bobble is that it's surprisingly mostly NOT random with its magic items. Each of the magic items has an in-game counter associated with it, and when that counter is met, the next level will spawn said item. If multiple conditions are met, then the item of highest priority spawns first. After that, the counter for the spawned item resets and the item next in line spawns on the next level (provided the players don't meet the requirements for a higher priority item before that next level). This continues until there are no more items in line. Note, however, that even if the item doesn't actually spawn in time due to level completion or game over, it will still count as having spawned. These counters are reset as soon as the game is powered off. Our run is recorded from a fresh power on to prevent such exploitations, as it is possible to get a game over and start over, keeping the counter where it is at.

The four most important item triggers (the only ones I'm actually familiar with) are the shoes (15 bubble bounces, granting increased move speed), green candy (35 bubbles blown, granting increased bubble blowing rate), blue candy (35 bubbles popped, increasing bubble range), and the umbrella (20 water bubbles popped, skipping 3-5 levels, though which amount of levels you skip I believe IS random). Shoes have priority over blue candy, which has priority over green candy. This relationship is the only one I'm familiar with. For example, on level 1, if one manages to dilly-dally enough to blow and pop 35 bubbles and bounce 15 times before clearing it, level 2 will spawn shoes, level 3 will spawn blue candy, and level 4 will spawn green candy. It's important to know this hierarchy so players can arm themselves optimally.

The first 11 levels are meant for setting up our power-ups accordingly so we will be optimally powered for as long as possible. In the event of a death later in the run (losing the power-ups, an almost inevitability with this difficult game), we try to set it up so the weakened player can get powered up as soon as possible (optimally with green candy and shoes, blue candy is not nearly as imperative).

One more thing to note is the letters. There are 6 different letters that spell out the word EXTEND. If you succeed in spelling out EXTEND, you gain an extra life and automatically skip the level you are on. To trigger these letters, you must either cause a chain reaction of killing at least 3 enemies at the same time (you get a point bonus as well, and the more enemies chained, the more letters are spawned in an open ceiling/floor level) or get a white necklace. However, WHICH letters are spawned in either scenario are randomly chosen. You'll probably notice a lot of duplicates floating around in this run, but we are lucky in WHEN we get our EXTENDs (generally in levels we dislike or tend to lose at least 1 life in).

Without further ado, here is the level-by-level synopsis...

Obviously, the aforementioned trouble spot levels can be improved. However, this run was easily our best in terms of speed and survival, and it's doubtful that we'll get EXTEND and umbrella luck like that again anytime soon.

I'd like to extend a heartfelt thanks to the Kings of the Abyss and drunkgamer.net, especially Harker for helping us keep track of water bubbles. I'd also like to thank my dear Amie for putting up with my Bubble Bobblin' for many-a-evening.

And of course, I need to thank Andy for having me participate in such a run. He and I have played this game forever and I'm nowhere near his level of play yet. Thanks for putting up with me Bro! I never thought I'd ever be able to do a speed run, but you helped make this all possible. Let's go for the gold! GET CHANCE AND LUCK!