Released in December 1999, Bugdom follows the quest of Rollie the Roly Poly as he tries to vanquish the fire ants who have taken over his territory. A number of glitches, including the ability to clip through walls, take the difficulty of this PC platformer and reduce it dramatically. 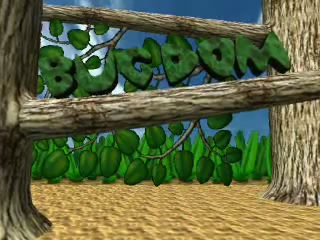 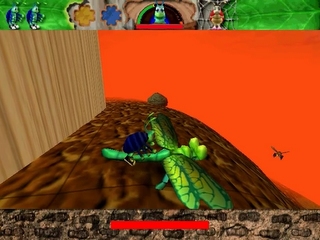 Bugdom was the first game I ever tried to speedrun, way back in 5th grade. I found a number of little glitches and tricks in the game back then, but eventually I moved on to other games. Recently, I rediscovered Bugdom, and decided to speedrun it for SDA. I went through the game and found some new tricks along with the old ones, then started working on getting a good run.

In order to better understand the run, here's an explanation of the various tricks used, in order of appearance in the run.

The Roll Boost Glitch--This only works in the Windows version of Bugdom. The Roll Boost is activated by pressing the kick button while rolling. It appears to multiply your speed by a fixed, rather large amount. The net effect in the Mac version was that you hit your speed cap almost instantly, and thus the roll boost had the effect of instantly giving you top speed. However, the Windows version of Bugdom does not seem to have a speed cap. That means the roll boost will quite suddenly give you an enormous speed, often faster than the game can keep up with. This is naturally very hard to control, and has a tendency to land you very far out of bounds if done improperly.

Clipping--Clipping out of bounds is far easier than it should be in this game. Any vertical wall can be clipped through at any corner that points toward you. This is used a lot, as many levels have their exits quite close to the start physically. Clipping back in works the same way, as walls in this game are two-sided. It should also be noted that all bounding walls are infinitely high, despite appearances. This is why I can't just get a particularly high roll boost and fly over the walls.

Dragonfly clipping--When you jump off the dragonfly, it continues moving forward a bit. If it happens to land partially through a wall, jumping back on the dragonfly will carry you through the wall.

Turbo input--Holding a key down in the Windows version causes the game to turbo that input until another key is pressed.

Honey/Lava Jumping--When you fall into a deadly liquid, the game does not immediately declare you dead. I suspect it first considers you "in water", then sees that this is a deadly liquid and kills you. If you jump between those two checks, it will skip the second one, allowing you to jump through any liquid. This is one of the oldest tricks I've found. Also, turboing the jump input makes it really easy.

Ceiling Jumping--When you hit a ceiling, you have a brief window where you can jump again. Of course, if you do, you're likely to hit the ceiling again. Thus, you can travel along ceilings by repeatedly jumping. As before, turboing the input helps a lot.

Now that that's out of the way, onto the rundown of the individual levels.

Level 1--A quick roll boost lands you right next to the exit log. This is fairly inconsistent, and this particular shot was about average. Sometimes you can land inside the thorn circle and not have to open the orange door, but that's even more inconsistent. That's really all there is to this level, and it went OK.

Level 2--A quick clip out and clip back in takes you straight to the exit. While all levels have terrain OoB, Level 2's has a lot more stuff in it. Makes you wonder what got taken out in the final cut.

Level 3--A lot like level 2. The clip back in takes advantage of the lack of speed cap on rolling by getting ahead of the level's drawing routine and slipping in bounds before the walls get drawn around you.

Level 4--The feet are somewhat random in whether or not you get hit, but I do fine here. I think this is a personal best time for this level. This level also has an amazing BGM, but you don't get to hear all of it due to how fast I complete the level.

Level 5--I turbo the fire button to quickly deplete the hive's health. However, I have to use some moderation while doing this, as having too many fireballs on screen at once will crash the game, which is obviously disastrous in a single-segment run.

Level 6--There aren't any level-skipping shortcuts in this one, so this is easily the longest level in the game. Good thing it has great music. Naturally, I skip the annoying platforming sections with Honey jumping, and I use a roll boost to quickly reach the purple plunger. It's impossible to get out of bounds in Level 6, so the roll boost isn't very risky.

Level 7--This is the first time I've gotten an absolutely perfect Queen fight. Normally I lose a lot of time in this fight due to the large amount of inconsistency in rolling attacks, but this literally could not have gone better.

Level 8--Level 8 is a quite large level. Naturally, I skip all of it with a quick jaunt out of bounds. The gate at the end would normally be a roadblock, but thanks to a bit of poor level design, there's just enough room to squeeze under the gate in ball form.

Level 9--Ceiling jumping makes its debut to get over fire walls. They can actually be jumped over by jumping from the walls of the tunnel, but this is very hard, while ceiling jumping is very easy. Lava jumping is also used to avoid the horrible root swinging.

Level 10--King Thorax takes 13 kicks to kill. Since you can only get 4 kicks in before re-dousing him, you'd think it'd take 4 cycles to kill him. Thankfully, rolling into him does slightly more damage than a kick, allowing him to be beaten in 3 cycles with 11 kicks and 1 roll attack.

So, that's the whole run. I don't think I'll come back to improve this, because really the only improvable thing is the roll boost in level 1. Other than that, I pulled off a ton of fairly inconsistent tricks in a row, and I don't think I'd even be able to get a better run. It's a great tribute to a game that's an old favorite of mine, and just overall a great run.