Relased in March 2005, Budgom 2 takes place three years after Bugdom. Take control of Skip who had his knapsack stolen. Go get it back, with help from your friends Sam the Snail and Sally the Chipmunk 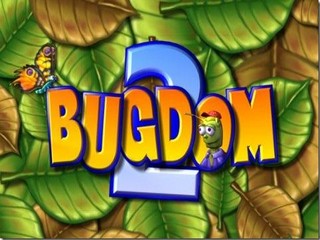 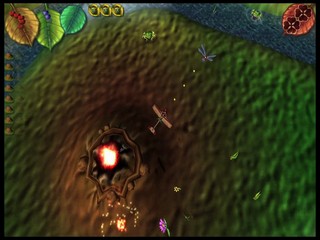 Level 1 –  Level 1 starts off with an out of bounds clip right away at the beginning of the level, followed by walking around the entirety of the level.  Pretty straightforward.

Level 2 – This level is a bit more interesting, as we start out inside the level. We ride the baseball through the first section, then make our way across the pool over toward Sally the Chipmunk and clip out of bounds again, completely ignoring whatever she wanted to say. Then we walk right over to the last section of the level and clip back inbounds. From here, we just hop right into the doghouse, which triggers the end of the level. Both clips were solid in this level.

Level 3 – This level gave me nightmares as a kid. No joke. Anyway, this level went pretty smoothly, no damage taken, and decent movement throughout. I tend to seek out butterflies here in order to get more buddy bugs. Each of the enemies in this level take exactly 1 buddy bug and 1 kick to kill. However, the ticks only take 3 kicks, whereas the fleas take 4. Just a little fun fact there.

Level 4 – Autoscroller. Hooray. Made one mistake and hit a section of pipe that I don’t believe I’ve ever hit before. Oh yea, hitting things in this level (and later level 7), slow you down a little bit. So I guess it’s not a true autoscroller? I don’t know.

Level 5 – Fun fact about this level, it’s the longest level to complete in the no oob and 100% categories, but is the shortest during any%. Just takes two easy little clips and a short walk to make it to the end of the level. Fun stuff.

Level 6 – This clip can be a little inconsistent, but I somehow managed to get it right away. Then the rest of the level is just walking around to the end of level, similar to level 1.

Level 7 – Autoscroller no.2, electric boogaloo. What really infuriates me about this level is that there are 2 pinecones during the level that seriously take up the entire gutter. Like, you have to be nearly pixel-perfect to avoid both of them. As you can see, I only avoided the first “impossible pinecone”, nailing the second one head on. Also, these have to be the most graphically advanced pinecones in any game ever. Each one literally has a couple hundred polygons.

Level 8 - #letthemicedrown% This level is pretty interesting in the fact that you will die if you don’t finish the first section of the level within a certain amount of time. Obviously, we’re not about to save the mice and waste time like some casuals. So, the goal became to find a way to beat the entire level before that timer ran out. By clipping oob, and back in again (2 clips that have given me plenty of trouble in the past), we can get to the last section of the level and assemble the plane with roughly 10-15 seconds to spare.

Level 9 – I don’t get why a story about retrieving a stolen knapsack from a bee goes to actually bombing anthills. Like, the ants never show up before this level. What did they ever do? Whatever it was must have been pretty nasty if it necessitated destroying their homes. Anyway, this level is pretty straightforward, just a matter of finding the best lines from anthill to anthill.

LEVEL 10 – Here we are, the most infuriating level of the entire run. In this last level of the game, it was never thought that one could clip out of bounds efficiently enough to get it into an any% run. But through months of research and development with the nation’s leading scientific minds, we discovered 2 little sections of wall that made it possible to clip. And so, by jumping on the bobber and getting the fish caught, we have enough time to clip through the wall and walk to the last section of the level. Don’t get me wrong though. Both of these clips are extremely hard to get consistently, let alone being able to get through the wall in only a couple seconds. Too many times have I lost MINUTES to these two clips, and for this run, the stars seemed to have aligned to allow for fast clips throughout the entire game. Then it’s just a matter of gathering a couple leaves and twigs to smoke the bees out of their hive. We done won.

I want to say thanks to myself for routing this run over the past few years, and I also want to thank Qazedt for beating my previous world record and getting me to come out of retirement to beat his sum of best by 2 seconds. I honestly don’t think another run with this sort of luck is possible any time soon, I’ve tried to beat it the past year, and haven’t come close. It truly was a god run. Hope you’ve enjoyed the run a bit, and feel free to check out Bugdom 2 and the runs for Bugdom 1, those are pretty fun to watch.
-Newtmanking